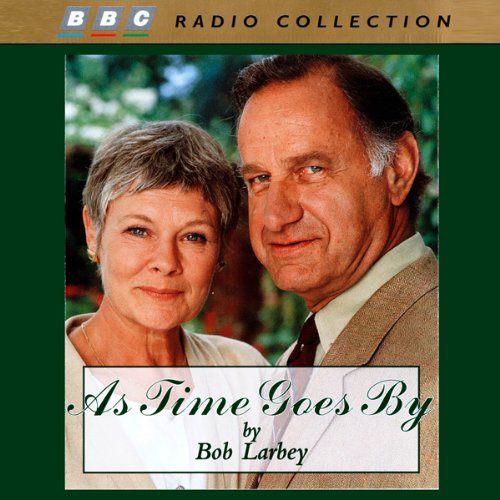 As Time Goes By

Dame Judi Dench and Geoffrey Palmer star as old flames Jean Pargetter and Lionel Hardcastle. Their love story was all set for a happy ending in the 1950s when Jean was a student nurse and Lionel, a young army officer. But he was posted abroad and they lost touch. Thirty-eight years later, Lionel has returned to London to publish his autobiography and, through a strange coincidence, he is reunited with Jean who has set up a secretarial agency.

Specially adapted in six episodes for BBC Radio 2, this hugely popular BBC1 bittersweet comedy about the reunited lovers asks the burning question, Can the flame of passion still flicker in middle age?

This is a great radio play closely following the BBC T.V. series. The characters are well written and charming. The situations they find themselves in are entertaining without being fantastic or unbelievable and their interactions reveal a very genuine warmth. A healthy dose of sarcasm and self deprecating humor keeps the program from becoming too sweet. I thoroughly enjoyed my time in the company of Lionel and Jean. The only improvement I could ask for is the ability to buy the next few series!

Just as charming as the television show

I don't know what there is about "As Time Goes By" but I am a fan of the TV show and I very much enjoy listening to these 6 shows on audio. The acting is first-rate and the story lines are cute and warm. I hope they bring more of the episodes to audio listening, as they are so enjoyable and relaxing.

If you could sum up As Time Goes By in three words, what would they be?

What was one of the most memorable moments of As Time Goes By?

All of them as they bring the series to my mind.

What about Judi Dench and Geoffrey Palmer ’s performance did you like?

How true to each other they are. I can picture them.

Its been done and its fabulous

I loved this show and equally enjoyed the radio show. I wish there were more episodes for me to enjoy. I have been a repeat listener. I highly recommend this show.

Wish there was more

I wish the rest of the episodes were available. This is possibly my favorite TV series. My only complaint would be it's the wrong voice for Alaster but I believe that could not be helped.

one of our favorite British comedies. we are still watching it every week on pbs.

This little British comedy is one of my favorites; having this via Audible allows me to bring this little joy
into everyday life. Wish there were more episodes to hear!

Hope they release more seasons! This is an enjoyable listen for any fan of the show.

I absolutely love this show and being able to listen to it as a radio drama is wonderful.

Fun, but not as good as the TV show

Watch the TV show first. This Alistair's not as good. But the other characters are still wonderful!