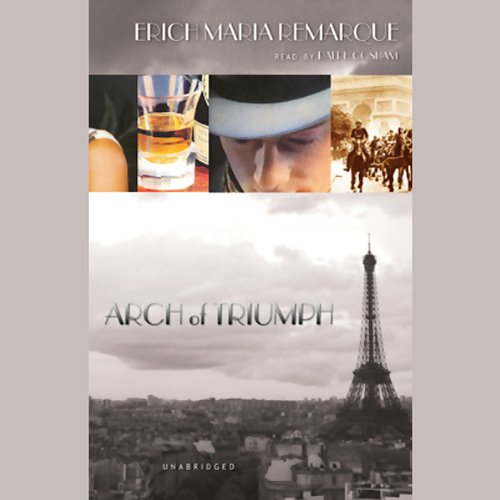 It is 1939. Despite a law banning him from performing surgery, Ravic, a German doctor and refugee living in Paris, has been treating some of the city's most elite citizens for two years on the behalf of two less-than-skillful French physicians.

Forbidden to return to his own country and dodging the everyday dangers of jail and deportation, Ravic manages to hang on, all the while searching for the Nazi who tortured him back in Germany. And though he's given up on the possibility of love, life has a curious way of taking a turn for the romantic, even during the worst of times.

"A great writer....[Remarque] is a craftsman of unquestionably first rank, a man who can bend his language to his will. Whether he writes of men or of inanimate nature, his touch is sensitive, firm, and sure." (The New York Times Book Review)

One of the best book listened so far..I will definitely read or listen more Remarque's books. And Ralph Cosham is a great reader.

Remarque is known for the classic All Quiet on the Western Front, which is one of the greatest war stories ever told. I liked this one as much as All Quiet.

A German doctor, Ravitch, escapes from Nazi Germany and is living illegally in Paris. He earns a living as a ghost surgeon for French doctors who are not as talented as he is. One night he meets a woman on the street in Paris, and the story takes off from there.

The characters are the best part of this novel because each one comes across as a distinct individual. You can almost visualize Ravitch, the girl he meets, the French doctor who tries to cheat him and another who defends him, his Russian emigre friend who works as a doorman at a nightclub...each one has a real face. And the narration brings this out.

And, by the way, they drink Calvados throughout the story. It's French apple Brandy with a bit of a kick to it.

I could recommend Erich Maria Remarque just for the beauty of his prose. It is as if he has a love affair with the English language even though it is not his native tongue. But, he offers much more than the selection of perfect words. He uses character development and the Paris scene to weave the story of a young Jewish German doctor who survived prison and torture in W.W.I and wonders why.

The setting is in Paris during those shaky, tense years between the Versailles Treaty and Hitler’s March on Poland. Remarque presents a world still recovering from W.W. I and listening to Neville Chamberlin’s denial of reality as he talked of the hope for a world without war. He conveys the mood of unrest, fear and tension of the large communities of displaced immigrants, expatriates and working people on the streets of Paris; the hotel doormen, maids. barmen, brothel madams, whores, etc.

At the personal level, the protagonist is a person without legal papers after escaping from the camps and prohibited from practicing medicine because of his German medical degree. He lives in Paris hotels under changing aliases and illegal passports as he journeys from one European country to another and is deported from one to the next, sometimes with fines and short incarcerations, back to the streets of Paris where he develops friends and acceptance due to his surgical skills.

Here he meets survive-at-any-cost, Joan, and he recognizes his major torturer from the prison camps. Thus, he pursues love and plans revenge. His journeys are filled with suspense and melancholy as he searches for the meaning of life for himself and mankind. A powerful novel.

Another sad smile from the poet of dispair.

I'd like to correct another reviewer first. Erich Maria Remarque never wrote in English but only in German. The German original is as haunting if not more so than the splendid English translation of the novel by J. Maxwell Brownjohn, who incidentally translated many other of his works. Besides, the protagonist is a German surgeon, but he is certainly not jewish. This is important for a full appreciation of the book.

This novel even surpasses his "Drei Kamaraden" translated as "Three Comrades" in helpless tenderness and poitless loss, the inevitable legacy of every war irrespective of what some power-hungry brute says, be he a dictator or a 'democratically' elected ruffian, specimens of whom are all too common today.
Remarque's break-through came with his "All Quiet on Western Front" in the wake of the Great War, in which Europe committed cultural suicide at an intellectual level, and just over two decades later, started her material end with the rampage initiated by Hitler, the Bolshevik dictator and totally incompetent political nincompoops who led the allied nations.
This story is thus set in a Europe that still remembered her cultural shared heritage where many of her priceless cultural artifacts were still intact but soon to be bombed into smithereens. Human suffering the characters in this book endure seems to look like a last farewell to something priceless, never to reappear, for we forget, and forget.

I have unpardonably overlooked to say anything about the literary merits of this wonderful book. Obviously, its main themes are love and friendship as one often sees in Remarques other works. In spite of the world that's crumbling down around him, Ravic finds both, but the love he finds is not conventional; it is something that illumines the man from within but without what is now called a 'relationship'. This awareness comes to him on a park bench not far from where Joan now lives with her new 'lover' soon after Ravic's return to Paris after his expulsion.

Once he realises this, things happen fast. His successful use of the unexpected chance to kill his tormentor von Hake, he is reconciled with his tortured past, and the moving scence at Joan's death bed, reconciles him to his new notion of love. And so, now in harmony with himself, he could face life with a tinge of optimism without resorting to lies, hence his return to Hotel Internationale and telling the police who he really is. Interplay among these themes and the rapidly collapsing world around him, is iridescent and haunting indeed.

I've read the book multiple times and fell in love with the characters.... I now love the audiobook. The narrator is wonderful.!!

Like all Remarque's works, this is a refreshingly somber tale of exile and depression. And it's all lifted by Cosham's reserved yet layered perfoance. 10/10 would get sad again.

An important story which almost got lost in the repetitive emotional declarations of the main character and the woman he loved the only way he could, intermittently.
She behaved in a similar fashion which became distracting

I listened and I listened and kept waiting to be drawn into this book. But, like a novel by Hemingway, if you're not a literary scholar, it can be a painful process. If you love Hemingway, you will love this style of prose. If not, save your points. Plus, the story is very dark with no happy ending or life lessons. Seems to be the embodiment of the motto "life sucks and then you die."

just great. That's what I call a masterpiece! Remarque never disappoints one relying on him.

I have always loved this nook, and the movie. It has been about a decade since I read the book. It was a great read still.

Beautiful story telling, beautiful writing, beautiful love story, learning from history. I can read and reread it over and over again