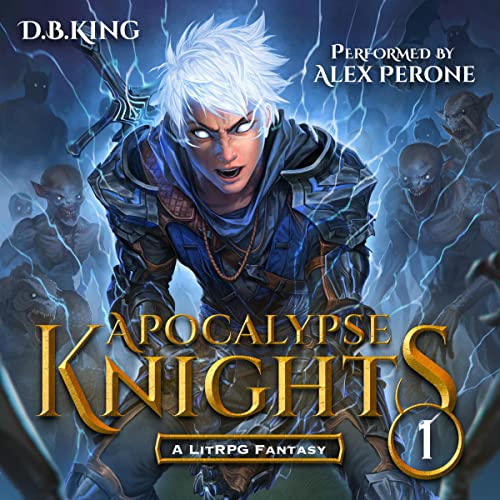 The apocalypse is coming…can one war hero stop it?

Maximo Strident, war veteran and member of local law enforcement, never wanted to enter the dungeon. With promises of wealth beyond his imagination, his squad mates managed to convince him.

Max isn’t a Knight, so he has no magical equipment or spells that could help him against monsters. What he does have, however, are the sword forms he learnt at the Blade Academy. These forms are formidable martial arts that make him the match of Level 0 monsters. But Level 99 monsters? He doesn’t stand a chance.

When something goes horribly wrong inside the dungeon, Max meets the legendary hero: Artur Brightblade. This hero grants him something he never dreamed of: a unique class and the ability to become a Knight.

Armed with this new class and the powers it provides, Maximo is going to clean up the Knights-Errant and solve the mystery of the dungeon. He’ll have to learn how to cast spells, work within a cohort, level up most effectively, and craft war gear worthy of his class. If he doesn’t, the apocalypse will destroy everything he knows and loves.

damn this book is boring! and the mc is a dick. i got fooled by the good cover art.

This is a standard dungeon fair. The MC is pretty boring and nothing really flushed out with him. He has the typical author plot armor but you will run into glaring issues about a hour into it.

I enjoyed this book. Starts out like most cop movies but gets powers like the cool kids. Later in the book there is some comedy with a familiar. I thought that Interaction was the best in the book made me laugh several times.

It's worth a credit.

(Spoilers) I became confused with where the story was going. He made a friend and then decides to go solo after the mighty being asked him to get the Knights in shape. Instead he goes solo then at the end he talks to some leaders and who knows what will happen next. I'm not sure if the author was experimenting with different types of sidekicks or what. Just seemed to get strange and answers to the cosmos are just suddenly at hand. I'll try the next book but I'm hoping there is also less character sheet pop ups and more character development with tangible loss and rewards. Will Felix return or will the Batgirl be his friend since he did kill her and enslaved her by accident. Will he train up some troops or pass on his knowledge through scrolls? Will he make magic items of incredible strength for the troops? It all seems rushed to the point that a miracle from the author will save everything.

I enjoyed this story so much I read it and bought the audio. I really enjoyed the way the world is slowly introduced and the system is explained. The narrator did a great job as well.

MC has a bit of an issue with his personality sometimes. He has a bit of plot armor but not so much it makes you hate it. Growth is decent and the speed is explained nicely.

That was an awesome audiobook to listen to and I can't wait until the next installment of Apocalypse Knights to see what's in store for Max. Would write more but I don't want to spoil the audiobook for anyone else but it's definitely worth the credit.

Not what i was expecting! but pleasantly surprised!

MC take-down:
i love how the MC is depicted. you think the MC is the typical moody guy, but then you see he has a different...almost childish side as well that has been beaten down by life. its portrayed SO well!

other characters:
The other characters are done very well also. they are also NOT your typical run-o-the-mill slot ins! they are well rounded and have their own back stories. the MC get's things wrong and the other characters get to work around that....
this story has SO much potential with just the character interactions ALONE i'm just-

the story:
if you're not paying attention you WILL get lost. there were times i had to go back and was like "what now?" i might get the hard copy while listening to it so i can also follow along...
other than that, its awesome. its taking a direction that is intriguing to say the least. I know most authors are trying to avoid the cliche and do "something new" and all that, but this guy has taken a done idea and just had fun with it. that's what it feels like to me. and it works. *^^*

Spend the money or credit right now and start the journey. I can't wait for book 2.