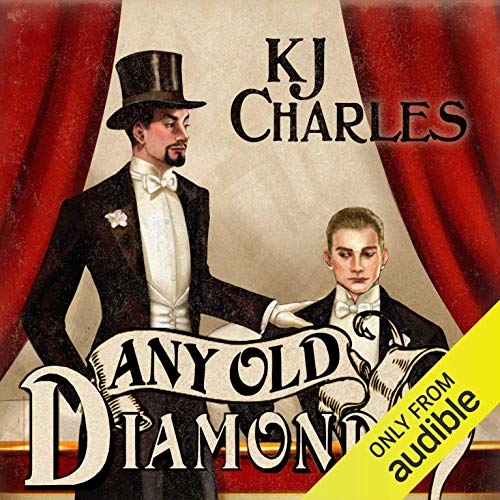 Lord Alexander Pyne-ffoulkes, the younger son of the Duke of Ilvar, holds a bitter grudge against his wealthy father. The Duke intends to give his Duchess a priceless diamond parure on their wedding anniversary - so Alec hires a pair of jewel thieves to steal it.

The Duke's remote castle is a difficult target, and Alec needs a way to get the thieves in. Soldier-turned-criminal Jerry Crozier has the answer: He'll pose as a Society gentleman and become Alec's new best friend.

But Jerry is a dangerous man: controlling, remote, and devastating. He effortlessly teases out the lonely young nobleman's most secret desires, and soon he's got Alec in his bed - and the palm of his hand.

Or maybe not. Because as the plot thickens, betrayals, secrets, new loves, and old evils come to light. Now the jewel thief and the aristocrat must keep up the pretence, find their way through a maze of privilege and deceit, and confront the truth of what's between them...all without getting caught.

Set a generation after the trapeze artist stories, in that version of England, a duke’s children are scraping by, with what counts as scraping by for the aristocracy, on a meager allowance and in the case of Alec, his skills as an illustrator. He hires professional jewel thieves to steal a necklace from his wicked stepmother and in the course of setting up the heist, they fall for each other.

Content warnings for death by means violent and neglectful. There’s low gore but as a primary plot driver, it’s integral to the tale. There’s also a brutal beating, thieving by protagonists, and general worries over gay sex being illegal.

The tale of the heist kept me involved. The choices people made, in part, due to laws of the time, made things difficult for the characters and me as a reader. Every main character had me both rooting for them and cringing away from them at some point. I get that people are imperfect but this book really offers wild swings between what is & isn’t “good” behavior given boundary conditions of what is & isn’t legal or possible. The mitigating circumstances do not quite sway me from cringing at some choices. And there was a little too much “getting back at my dad by hurting his wife dynamic” hence -1 star.

The whiplash examples:
Alec’s father is a terrible father and a rather miserable employer but… he truly loves his 2nd wife and makes improvements to his house and estate.
Alec is tough and self supporting and a good brother & he, himself is kind but… with the “I can be friends with a perpetrator of genocide” kind of kindness that can be annoyingly, and potentially fatally, shortsighted. Yes, find the humanity in these people who will cheerfully, or grudgingly, kill you but don’t help them hurt you! Literally the second he is out of the crosshairs he will forgive slights to himself. (But not to his sister.)
Jerry is pragmatic and caring to those he values but… he values very few people. He might not be lovable by one such as me despite him being nearly my ideal in his private tastes. Unlike the fortune teller (referenced in this book, from the previous series), a jewel thief seeks out his victims. He doesn’t just target those who ask. Having been robbed I have pretty strong feelings about not liking robbers. Then again, how ever much jewels may mean sentimentally, a jewel thief does target people who most likely can absorb financial loss, and had likely exploited people to afford the jewels. And when one’s standard employment options have evaporated, punching up is better than punching down. So I fundamentally reject part of him for the hurt he causes others in his career. But he’s a good foil for Alec.

Steam. Medium-hot. On page M/M sex happens in several scenes, pretty much all in a D/s dynamic. The kink isn’t around pain or humiliation at all and consent is explicit and exquisitely attended to. I’m a little thrown by another reviewer thinking the kink here is extreme since I’d be tempted to offer this as an entry level foray into healthy D/s kink.Alec can handle his life fine, he’d just prefer not to make decisions in the boudoir. Jerry, who prefers making decisions in the boudoir, figures this out. The dynamic’s a big part of why they get together; Jerry can direct without taking advantage,addressing a problem that has plagued Alec’s earlier forays. Honestly the sexual dynamic is the healthiest thing these guys have going. But for sex & Alec’s art, the plot is a jumble of morally questionable actions.

Narration: I usually like this narrator and do here. He uses good dynamics. The production quality is consistent. (I wish narrators would sing when folk songs are included though.)

Another masterpiece of storytelling by KJ Charles

There are very few titles I buy without reading the reviews and certainly fewer that I pre-order, KJ Charles is the exception and so far I have never been let down by her work. This type of story is not everyone's cup of tea, but for those who enjoy a regency feel with an M/M romance it doesn't get better than this!

Another reason this audio story is amazing is because of the narration. Cornell Collins is FABULOUS. He does characters' voices with such a dramatic flair, I am always captivated by his performances. He does women's voice well, does each character with unique expressions and I never have to think about whom is speaking.

A final note--if you have not read or listened to her other books set in a similar time period (not the Magpie ones) like Society of Gentlemen and Sins of the City series I would start with those first. They are not dependent upon one another to know or enjoy the stories but reading or (even better) listening to those stories first makes this one feel much richer and familiar,

It must be said that I was already a KJ Charles fan BUT this book was so good it's one of a select few I've listened to twice. The story was well thought out, we revisited characters from other books, the sex was steamy and the emphasis on consent is second to none. love, love, love

This is a great twisting plot with sexy gentleman. A smart and surprising tail about righting past wrongs. And the narrator's voice is lovely.

After loving the Magpie Lord audiobooks I decided to try another KJ Charles/Cornell Collins audiobook and was not disappointed. Any Old Diamonds was a fun story about thieves, aristocrats, betrayal, murder, and with some hot D/s sex and a M/M love story. Totally enjoyed it start to finish. Fantastic performance by Cornell Collins!

I enjoyed the twist in the plotline, I had to reverse and listen again to make sure I had it right. wonderful book.

Can KJ Charles write all the books?

Can KJ Charles write all the books? Do fun! ***

Just WOW- this is everything I love about books!!!

Narration- just amazing as usual with this narrator- it's a auto-buy when Cornell and Charles join forces. The language is rich the accents thick, the sass British and the plot twists are to die for.
I have to say the story was really good, and I found myself surprised in many occasions. The relationship between Jerry and Alec is complex and so very compelling. I was invested 100% and the steam is still sizzling even though I finished the book last week!
Was so mad at myself for not listening to this sooner, this was a pure delight.

First of all Cornell Collins is superb at his craft. I've listened to a number of his audio presentations and they are smooth and polished. This book continues that mark of excellence. I especially adore his vulnerability with sex scenes and the intimacy between Alec and Jerry.
I enjoy historical romances by KJ Charles because of the sexual tension and suspense driven plots that are present throughout her work. It is such an addictive combination it's made me a forever fan. Don't be fooled there is a lot of depth to all her books they explore those uncomfortable spaces that are part of human emotions.
I am making my way through her books and have not been disappointed yet. And oh my the sex scenes are detailed and exquisitely written.
It is a joy to read her work

I've been trying to figure out why I love these books and I've come to a conclusion. No one gives up. It's all heart, fire and communication. I don't have any trouble pretending that they live happily ever after. All the underline issues are worked through in the end. You know that the other knows their partner and can deal with things as they come up. And everyone is a little bit an ass.