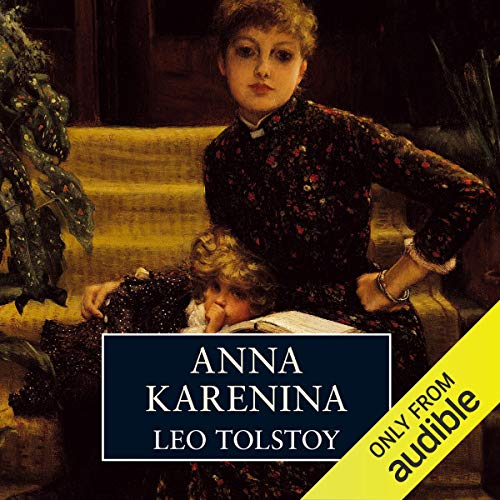 Anna Karenina seems to have everything - beauty, wealth, popularity and an adored son. But she feels that her life is empty until the moment she encounters the impetuous officer Count Vronsky.

Translated by Louise and Aylmer Maude.

How can one man understand so much about human nature and portray it so vividly and so beautifully? Tolstoy seems to have lived a thousand lives. Whether he is telling the thoughts of a mother as she gives birth, the reasoning's of a man who is trying to find meaning in the conflicting worlds of science and religion, the anxious feelings of young lovers or, amusingly, the thoughts of a dog as it runs through the woods chasing birds in a hunt, the descriptions flow so effortlessly and incisively that I found myself laughing and crying and with goosebumps over and over as I listened.

There is never a sense of hurry in the story--that the best way to read it was to enjoy the prose and let the plot unfold in its slow, meandering way without expecting it or anticipating it. It's a book that should be enjoyed with leisure and pondered over time.

Regarding the audio adaptation--the narration is among the best I've ever heard.

This work unites three classics: (1) the novel by Leo Tolstoy that depicts the inner life of women with piercing realism; (2) the translation by Louise and Aylmer Maude of 1918 that still sounds fresh and contemporary; (3) the narration by David Horovitch that effects the range of characters with only the slightest modulation in his natural voice and the subtlest of vocal "gestures": an intake of breath here, a "tsk" there. It doesn't get better than this.

Upon starting Anna K, I purchased both the Gyllenhaal and Hortovitch narrations and listened to the first two chapters. I kept Hortovitch, his reading being much more passionate than Gyllenhaal’s. Additionally, Hortovitch reads the Maude translation (a richer translation in my opinion), in contrast to Gyllenhaal’s reading of the Garnett translation. I was very happy with my selection; this title was 38 hours well spent.

My three biggest takeaways from this title: Konstantin. Dmitrievich. Levin. Talk about a character after my own heart: his morals, his relationships, his reactions to society, his enlightenment and the like. He’s a profound masculine character hidden behind the feminine facade of this title.

Anna K has lots for male and female readers alike. Perhaps my biggest disappointment with this title is the politicking of the various characters and cities. On a second read I might pick up more from these chapters but for the first read I found these scenes distracting.

For the first-time reader, be sure to keep your eye on the motions of Varenka and Koznyshev. While they both hold minor roles in the book, there are key moments for both of these characters throughout the title that should not be missed.

The meditations on the wide varieties of relationships presented in Anna K will leave me plenty to think about for the weeks ahead. While I didn’t find myself immediately itching to start a second reading like I’ve felt after some of the other Russian classics, the final 200 pages are quite the climax to the story and are absolutely worth the effort.

Come for Anna, stay for Levin, and enjoy some of the best outdoor scenery and relationships in literature along the way. May your own needs, desires and relationships be better understood upon completing this title.

The best translation and an amazing narrator

This is the version to listen to - the narrator is one of the best I've ever heard, and I think the english in this translation is the perfect balance of 19th century formality with modern vocabulary and syntax. I read Anna Karenina years ago and loved it then. But listening to this is like discovering the novel all over again.

A Mindtrip through Passions of Humanity

I was new last Fall to this Tolstoy masterpiece when I read it and listened in part. I came to it skeptical, under the mistaken impression that it was simply about Anna Karenina, her terminal love affair and her despicable selfishness toward her son and everyone else in the end. I thought "Anna K" was simply a story of this lady showing the tragic consequences of self-centeredness and the lack of any moral compass.

I was mistaken; the foregoing is only part of the story and should only be viewed in the context of the novel's three (or four) other relationships to appreciate the beauty of this Tolstoy masterwork.

Both the Russian Giants (Leo and Dostoevsky) play consistently the themes of man/woman's relationship to and with God and with spouse, the internal struggles of faith versus doubt and monogamy and morality versus free will, as well as the ongoing, infinite war between good and evil with all the skirmishes on the fringe.

These themes are arguably no where more dramatically displayed for study, contemplation and interpretation for all time by scholars, thinkers and, most importantly, lovers of literature in a quite timeless story of tragedy and relationships among and between:

Anna K in her tragic affair with the younger Count Vronsky

Her relationship with the controlling, but cuckolded husband Karenin and his capacity (or not) to move on and be a father to their son;

the steady, thinking farmer Levin and his courtship of and marriage to young, gorgeous and shallow Kitty who was once infatuated with Vronsky; and,

the unsteady, unfaithful social-hound Stiva Oblonsky (Anna's brother) and his loyal wife Dolly (Kitty's sister), the exemplary and unappreciated mother of his children, who catches herself daydreaming and fantasizing of what it may be like to have a torrid, short-term affair of body and soul.


Over this rocky terrain, Tolstoy fashioned an extraordinary and unforgettable mindtrip through the passions of humanity. YOUR destination should be some measure of SELF-revelation. Probably, it's varies from mine, maybe even antithetical. That is Tolstoy's point: a narrative to make you think and feel.

Glad I went for it!

I'm a major Dickens audiobook fan, and he is known for length, but I had doubts as to how well I'd do with the 38 hours of Anna Karenina. Not an issue, as it turned out. The writing is superb and often mesmerizing. Tolstoy goes into an amazing level of detail, and takes his time with scenes and plot lines. Once in a while I'd get a little tired of the detail (the political meeting went on a bit long, but they often do, don't they?), but then I'd come across something like Levin helping his farm workers scythe the hay, which is an extraordinary piece of writing, and find myself completely absorbed.

I can't sing David Horovitch's praises highly enough. It's a beautiful pairing of book and narrator.

This book is well worth your time!

Outstanding reading of an excellent translation

I (very thankfully) bought this after giving up on Lorna Raver's impossibly bad reading. Horovitch is masterful in every way, and even has enough linguistic ability to pull off the French passages quite well. (He is less successful in German but thankfully very little of that in the book so nothing lost there.)
Most impressive is his ability to invent, and maintain, distinct voices and accents for an incredibly wide variety of characters.
I cannot imagine finding a better reading than this one, and I will never be looking for one. Unequivocally recommended.

Ah, these were the days of meandering, philosophical ruminations, when not every paragraph had to advance the plot. . . . Tolstoy's novel is sheer brilliance, with complex, neurotic protagonists who drive themselves and each other crazy. The sanest characters are the peasants and the women, except for Anna, of course.

Tolstoy does a beautiful job of portraying life in Russia at that time--the politics, religion, society, families . . . what doesn't he talk about?!

The British narrator is wonderfully talented except for one odd kick in his gallop. When he reads the dialogue for peasants, he gives them a Cockney accent, and the kindly Russian Orthodox priest sounds Irish. I'm not kidding.

You must be a fan of a 'period piece' to really understand and follow Tolstoy. His writing is some of the most remarkable I have ever 'read'. I am awed by it; brilliant. I probably would never survive the printed page tho - too slow and too cumbersome for me in that form. Being able to listen and have my attention absorbed by the EXCELLENT narration is captivating.

Simply wonderful narration by David Horovitch. His voice gives dramatic fluctuations to the individual characters, showing his great talent for acting. This and the fact that the story was so captivating, I found myself reading the book when I returned from work - wanting more. It is a very long book and very long audio book, but I found it was well worth the time. It is a story that will stay with me always. I guess that is why it is, and always will be, a Classic...