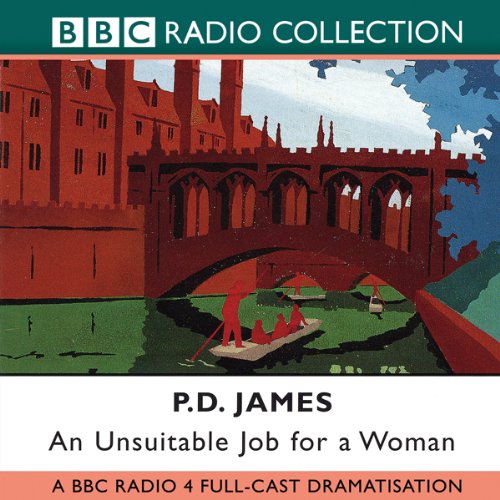 An Unsuitable Job for a Woman

Judi Bowker and Anna Massey star in this gripping BBC Radio 4 full-cast dramatisation featuring young detective Cordelia Gray. Mark Calendar, 21 years old and in his final year at Cambridge, leaves university without warning and takes a job as a gardener. Eighteen days later he is found hanging in the cottage where he lived. The verdict at the inquest is suicide. Cordelia Gray, now sole proprietor of the Pryde Detective Agency, is hired by Mark's father, the eminent scientist Sir Ronald, to piece together the facts surrounding his death. Gradually she sheds light on the apparent suicide, and long-suppressed family secrets begin to emerge. Whilst further tragedy is in store for the family, Cordelia discovers that, in the midst of Mark's many friends, there is a dangerous enemy with the cold and complex mind of a killer.

DO NOT GET IF YOU ARE READING ALONG WITH BOOK

This was a rip off. I thought it was going to read along with the book. After I purchased the audio book I found out I was wrong. It sounded like it was reading from the middle totally bypassing the beginning. This reading is a rip off. Do not buy this! I hope that this company refunds my money!

PD James is a great writer and this BBC production is top notch. It's compelling with some good plot twists and dark characterization. It's never a happy ending with James but it's always satisfying. This is not an Adam Dalglish novel though he makes an appearance at the end. It's shorter than the novel which is perfect for drive or regular commute.