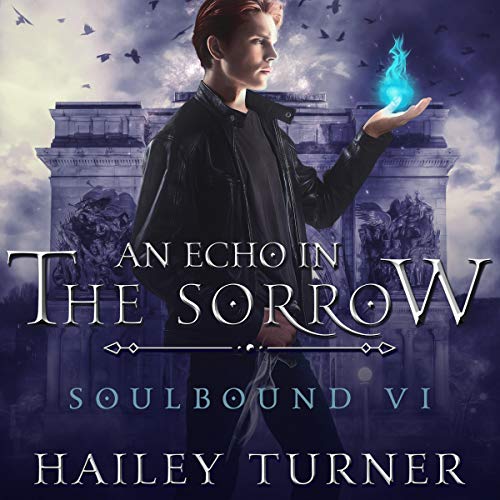 An Echo in the Sorrow

Forgiveness is a hollow prayer you only hear in your dreams.

Patrick Collins has spent years handling cases as a special agent for the Supernatural Operations Agency, even as his secret standing in the preternatural world has changed. He should have confessed to his role as co-leader of the New York City god pack when he and Jonothon de Vere took up the mantle months ago, but he didn’t. Now, that split loyalty will cost him at a time when he can least afford it.

Outmaneuvered, framed for murder, and targeted by the Dominion Sect, Patrick has to face a past full of lies to regain his freedom. Revealing the truth means he’ll need to give up the life that has defined him. Everything he’s fought to build with his pack is at stake, and losing them isn’t a price Patrick is willing to pay, but some choices aren’t his to make.

Jono knows they can’t cede any more territory if they want to win the god pack civil war spilling into the streets of New York City. But the souls of werecreatures are free for the taking when demons come to town and angels sing a warning no one can ignore. When Jono’s worst fear comes to life, and he loses the one person he can’t live without, the only option left is to fight.

Facing down the demons of their past and the ones in their present, Patrick and Jono will learn the hard way that some sins never wash away clean.

An Echo in the Sorrow is a 118k word m/m urban fantasy with a gay romantic subplot. It is a direct sequel to On the Wings of War. Listening to the first book in the series would be helpful in enjoying this one.

The biggest difference between reading the ebook version and listening to this audiobook is that everything is magnified almost ten-fold. That’s in big thanks to Gary Furlong’s excellent narration.

Because this is the second to the last book of this magnificent series, several things are happening, all of which are keeping me on the edge of my seat.

I’d definitely recommend this entire series to those who love urban fantasy with mythology of different pantheons and one hungry dragon. Seriously, it’s an excellent series, it’ll suck you right in.

I can’t wait for the bittersweet conclusion book of this series.

In this next to the last book, events are barreling toward the final confrontation between Patrick and his father. But first, the problem with Estelle, her wolf pack, and the demons they've allied with, must be dealt with. Is Patrick's lover, Jono, up to this? Of course! And Wade steps up as well. Wade is a favorite---and his moments of comic relief are a nice dash to add to this hearty meal of an adventure. As always, the narration is superb. Gary Furlong does a terrific job with accents, and with the voices of various gods and werewolves.

Wow!! 4.5 Stars in this penultimate book in the series & Gary Furlong keeps killing it with his performance in this multicast saga.

There is lots going on here, but Turner does a fantastic job of reviewing the main plot points in case it’s been a while since you read the last book.

So...the fight for the NYC Alpha God Pack comes to a head with some crazy fights.

More gods come on the scene & it’s anyone’s guess as to whose side they are one.

There is a wedding to plan.
Fenrir wants to come out to play.
A murder charge locks up one of the alphas.
A missing god has the fae on alert.
Hermès keeps popping up.
Wade keeps eating.
Gargoyles!!
And more....

This is definitely NOT a stand-alone by any means.

My rec? It’s such a good series!! I ADORE hard-headed Jono and Patrick ❤️❤️

What will happen to Johnno and his god pack ? ....

I’ve really enjoyed the series, with one caveat

I always feel like our protagonists get caught flatfooted by the antagonists. I’ve thought a couple of times, “come on guys, you should’ve anticipated that”! But still, its i’ve been consuming this series like candy. You won’t be disappointed. Looking forward to the next one.

can't wait for the next book...sad it will be the last. love Patrick and Jono , wade and all the rest. a not stop roller-coaster ride and hope it all ends with a happy ever after for the new York god pack.

I absolutely love this series and listening to the audiobook version was such a transcendent experience!!

The narrator did an exquisite Audio delivery and narration which left me amazed!!

I absolutely enjoyed listening to this one.
Recommend reading this in the series order.

I seriously adore this series so much! I love these characters and they just keep getting better even if at times the make stupid choices I want to smack them for I still love them. There was a good amount of action to enjoy. I kept wanting to know what would happen next and I seriously need the next book! I need more Patrick and Jon. The narrator did a fantastic job bringing their story to life.

Characters being stupid is not a fun plot mechanic

There's much less sex than previous titles, which I found nice.
The dialog is well done.
The main character making ridiculously stupid choices, which seem inconsistent with his usual behavior, almost ruined my enjoyment of the book. It's hard to care what happens to characters who behave so stupidly.
Seriously, there's lots of good fun with the book. But that just makes it more annoying when main character does stupid stuff.

Huge bang for your buck!

This is one of the best mm urban fantasy series out there and this was a fantastic addition to the series! Patrick and Jon are epic characters and this one was definitely edge of your seat the entire way through! I will be so sad to see this series end. Gary Furlong is fantastic as always, I love what he brings to the audio version of this one!