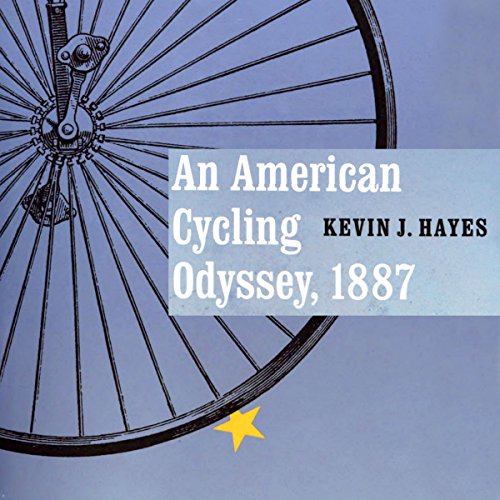 In 1887 a 21-year-old newspaperman named George Nellis (1865-1948) rode a bicycle from Herkimer, New York, to San Francisco in 72 days, surpassing the transcontinental bicycle record by several weeks. He averaged 50 miles a day pedaling a 52-inch, high-wheeled Columbia Expert "ordinary" bicycle with a tubular steel frame and hard rubber tires, and he lost 23 pounds in the process.

He bicycled ever westward through sleepy villages, farmlands, and growing cities of the rapidly changing nation and trekked across uninhabited stretches of prairies and mountains that marked its shrinking frontier. Following his daily 10-hour rides, Nellis sat down and wrote letters about his adventures to his hometown newspapers and a national cycling magazine to finance his cross-country journey.

Nellis's epic journey over dirt paths, muddy roads, and occasional railroad ties was plagued by terrible weather, frightening experiences, and odd encounters; yet it was also enriched by breathtaking natural wonders and the generous spirit of many people he met.

Drawing on Nellis's letters and media coverage of the trip, Kevin J. Hayes recreates in compelling detail this amazing trip and the many ordinary and extraordinary faces of late 19th-century America.

The book is published by University of Nebraska Press.

"This sparkling account will give Nellis, unknown outside cycling circles, some of the lasting recognition he so richly deserves." ( Booklist)
"The gripping narrative of how a young man doggedly overcame every obstacle to achieve his difficult goal...An engaging account of this amazing trip." ( Tucson Citizen)

A fascinating tale of the time and the bicycle

A bit of history that is truly engaging. This tells the tale of a young man who crossed the country from New York to San Francisco on his bike in the head of 1887 and set a new cross continent record. More so, it tells the tale of the origin of the bicycle and also gives one great insight into our country and the people that populated it during that time period. The tale is the young man and his interactions with the people he met in his journey are just fascinating. Kept me engaged and entertained throughout the whole listen. A must for anyone who loves history or the sport of cycling. I was voluntarily provided this free review copy audiobook by the author, narrator or publisher

Fantastic Journey Across America in the 1900's

This was an enjoyable read from the first to the last page. I enjoyed hearing the journey from Central, NY to San Fran. The narration was very good and the story as well. I loved hearing about the "roads" journeyed, the people met and the difficulties encountered. I also enjoyed learning about several other people that were relatable to the story. Fantastic book.