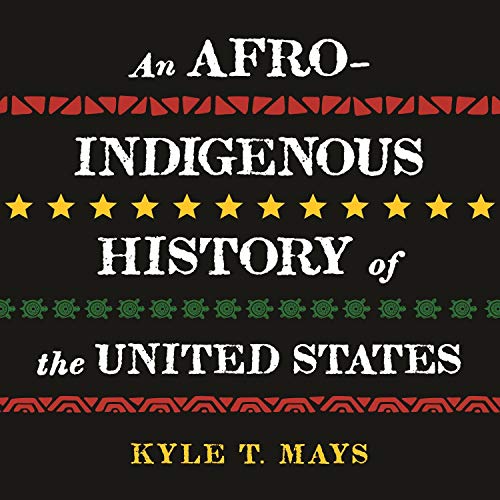 An Afro-Indigenous History of the United States

Beginning with pre-Revolutionary America and moving into the movement for Black lives and contemporary Indigenous activism, Afro-Indigenous historian, Kyle T. Mays argues that the foundations of the US are rooted in anti-Blackness and settler colonialism, and that these parallel oppressions continue into the present. He explores how Black and Indigenous peoples have always resisted and struggled for freedom, sometimes together, and sometimes apart. Whether to end African enslavement and Indigenous removal or eradicate capitalism and colonialism, Mays show how the fervor of Black and Indigenous peoples calls for justice have consistently sought to uproot white supremacy.

Mays uses a wide-array of historical activists and pop culture icons, “sacred” texts, and foundational texts like the Declaration of Independence and Democracy in America. He covers the civil rights movement and freedom struggles of the 1960s and 1970s, and explores current debates around the use of Native American imagery and the cultural appropriation of Black culture. Mays compels us to rethink both our history as well as contemporary debates and to imagine the powerful possibilities of Afro-Indigenous solidarity.

“Framed as an answer to questions in Mays’ life as well as his scholarship, this is a startlingly ambitious and deeply engaging study. Refusing to separate two sprawling, interconnected stories but respecting the integrity of each, Mays changes also the whole story of US whiteness as a system of thought and power. A perfect book to be read in classes or given to friends who want to understand the mess we are in and the resources of those who resist.” (David Roediger, author of How Race Survived US History)

“This is a bold and original narrative that is required reading to comprehend the deep historical relationship between the Indigenous peoples who were transported from Africa into chattel slavery and the Indigenous peoples who were displaced by European settler colonialism to profit from the land and resources, two parallel realities in search of self-determination and justice.” (Roxanne Dunbar-Ortiz, author of An Indigenous Peoples’ History of the United States)

“A bold, innovative, and astute analysis of how Blackness and Indigeneity have been forged as distinct yet overlapping social locations through the needs of capital, the logic of the nation-state, and the aims of US empire. While we know that slavery and settler colonialism are intricately linked, Kyle Mays uniquely demonstrates that the afterlives of these two institutions are also linked. They provide the land, bodies, and capital for ‘newer’ systems of bondage to flourish, such as mass incarceration. You will never think of the peoples’ history the same way after reading An Afro-Indigenous History of the United States.” (Robin D. G. Kelley, author of Freedom Dreams: The Black Radical Imagination)