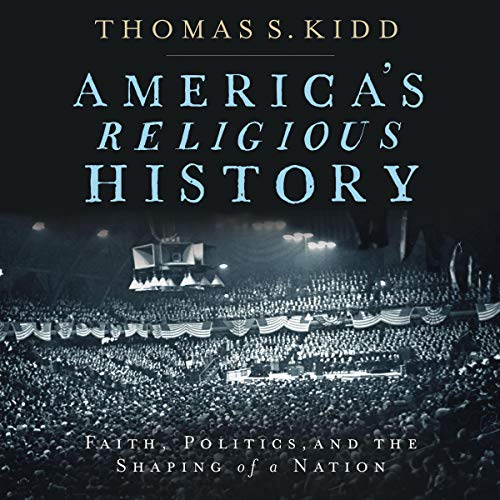 In the post-9/11 world, it is not difficult to see how important religion remains in America and around the globe. An older generation of scholars expected that America and the rest of the Western world was headed inexorably toward secularization and the end of religion. America is undoubtedly secular in many ways, and our constitutional order requires a clear distinction between faith communities and government. Yet from the colonial era to the present, American men and women have been, and have remained, a pervasively religious people.

In America's Religious History, leading historian Thomas S. Kidd traces the theological and ethnic diversity and enduring strength of American religion, with special attention to Christianity and evangelical faith. Interweaving religious history and key events from the larger narrative of American history, the audiobook considers how faith commitments and categories have shaped the nation.

Written with the student in mind, America's Religious History offers an up-to-date, narrative introduction useful for undergraduate and graduate-level courses on American religion. General listeners wanting to better understand the religious background of American life and politics will also enjoy its engaging and insightful overview.

I read it to get a view of the overall shaping of our country's religious practices. The author highlighted America's religious heritage and it's interaction with culture and politics. He hit the peaks of the main events, denominations, and people, for which a student of history should be familiar. I now have some areas that peeked my interest for which I will now go back and dig in with deeper study. This is a great book to see the big picture and get an idea on how we got to where we are today in religious America.

I recommend this work for others for a quick first read of American religious history.

This was a pretty good listen. The author did an excellent job of giving the history without injecting any bias. Everything was given very matter-of-fact. He also does a good job at showing how many religious aspects changed throughout time, especially in times of war. I wish he had spent more time on Roger Williams and some of the problems he faced in Rhode Island after he introduced the idea of true religious freedom. My only big issue was that the author kept using the word Sabbath when he was referring to Sunday. The Sabbath is the Sabbath, Sunday is Sunday. You can call Wednesday Friday but it doesn't make it so.