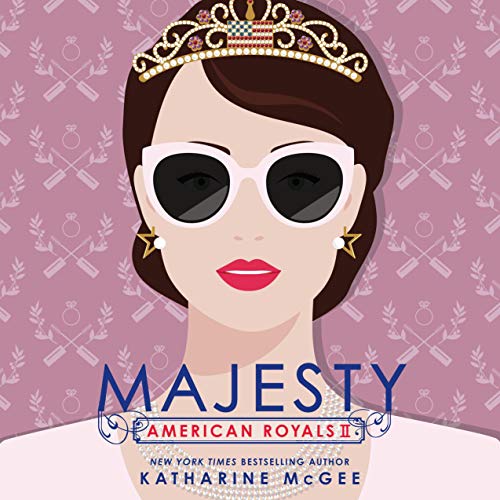 Is America ready for its first queen? If you can't get enough of Harry and Meghan and Will and Kate, you'll love this sequel to the New York Times best seller that imagines America's own royal family - and all the drama and heartbreak that entails. Crazy Rich Asians meets The Crown. Perfect for fans of Red, White, and Royal Blue and The Royal We.

Power is intoxicating. Like first love, it can leave you breathless. Princess Beatrice was born with it. Princess Samantha was born with less. Some, like Nina Gonzalez, are pulled into it. And a few will claw their way in. Ahem, we're looking at you Daphne Deighton.

As America adjusts to the idea of a queen on the throne, Beatrice grapples with everything she lost when she gained the ultimate crown. Samantha is busy living up to her "party princess" persona...and maybe adding a party prince by her side. Nina is trying to avoid the palace - and Prince Jefferson - at all costs. And a dangerous secret threatens to undo all of Daphne's carefully laid "marry Prince Jefferson" plans.

I never really connected with most of the characters in this series. I really only got this to find out what happens with Connor and beatrice. I waited almost a year for this and like I said, so disappointed. I'll be seeing if audible will let me trade this for another book.

What a Disservice to Fans

I have never been so disappointed in a highly anticipated book. American Royals was amazing. Such a fun ride. This book not only reverses everything you cared about in book 1, but doesn't do it in a convincing way. All of the characters come off as shallow and foolish. Their young love explorations are meaningless and not lasting. Why care about any of them? I was disappointed when I believe this was a saggy middle book of a trilogy. But then I read that the author is not currently planning for there to be a third book. SERIOUSLY?? This was your grand finale??? There's literally nothing grand about it. The plots are half finished and all of your characters seem reckless and weak. So so so much potential completely wasted. There should be a third book to fix allllll the problematic message thrown around here. I'm so mad. I feel utterly betrayed. I expected something deeper and more mature than The Thousandth Floor series (which I really liked!). Instead I got something just as immature and not nearly as well thought through. If you loved book one, don't buy this until she announces a third book and there's some hope for redemption.

The performance is amazing, and this is the perfect no thinking book! I’m in love with the little pieces of alt. History the author throws in.

WTF did I just listen to?

In true 2020 fashion, put this one in the garbage pile.

I really hate it when authors destroy their characters for shock value. That is the only explanation for what I just listened to. I enjoyed the first book immensely and was really looking forward to this. I thought it was supposed to be a trilogy, but apparently this is it. If there was something that came after this, I’d probably not be so pissed that I wasted 12 hours listening to this. But this is it. I’m disappointed.

I gave 2 stars instead of 1 because I did like Samantha’s story. Her story was fluid and you could see she had grown, without losing all of her spark from the first book. And Nina, whom I loved in the first book, became so... lacking. She never told Sam about what Daphne did to her in the first book (wtf kind of “best friend” is that, that you don’t tell her what happened that altered everything, at least eventually) and then was hurt by Daphne and Sam’s friendship. Like duh - Sam has no idea how evil Daphne really is because you never told her. And Daphne - ugh. She didn’t have to answer for literally anything. She “won”. Nobody called her out on the absolutely vile things she had done (Nina, Ethan, Beatrice, that best friend who literally almost died because of Daphne). She just gets what she wants and the end. And Beatrice.... I go back and forth on this one because while I love her ending (#feminism), I really hated her relationship. It felt forced and icky. I realize people move on from their first loves and she had a pretty traumatic life event (dad dies, becomes queen), but she still “fell in love” with her sister’s ex. And didn’t actually force a conversation with her sister until after it happened. It was... not great. That conversation from the first book, in the kitchen was so great and reminded me of my own relationships with my sisters and I thought that was a turning point for them then, but nope. Beatrice did a pretty messed up thing to Sam (even if it all worked out in the end) but it was still messed up and she got lucky that Sam grew enough to forgive and move on.

Also - wtf was Jefferson this book? He was a big part of the first book and it felt like the author just sort of made him this silent idiot, completely manipulated and stupid.

Ugh. Maybe someone can write some fanfic that would be better.

A good read with an awesome narration!

I've waited over a year for this book and I will say it was worth the wait. We were thrown back into the lives of these characters right where the first book left off. I will say that some of the characters had some really strong character growth while others fell at the waist side. Overall I was happy with this book. I adored the first one because as a history buff it was a nice change to see what could have been with a twist. I think anyone who has a love for the Royal family would enjoy this book! It did have some super crispy parts but at the same time, I am not their target audience. But overall it was a good book. At some points, it did feel rushed but that is so be expected when you have 4 POVs in one book. I can't wait for the next book to see more from this series! Also, I enjoy Brittany's narration, she makes each character sound just different enough without doing hard to believe voices.

I really enjoyed how this worked out; how the young women of the novel realize that first loves aren’t everything and grow up. I hope to see a third installment in the works soon.

I really enjoyed American Royals I and enjoyed Majestic just as much, if not more. It is a light and easy read (listen) that you can get through pretty quick. It’s a great beach read - I listened to it on my honeymoon. It took a much different and less predictable turn which I appreciated. The author didn’t follow the typical fairytale storyline. It had some creative twists, but stayed true to the themes of the first book. You see growth and empowerment with each of the women in the book, a great addition to the story.

Amazing sequel to “american royals”, highly recommend losing yourself in this wonderful story that will keep you on your toes guessing what happens next. Can’t wait for part 3, we clearly need to see more of Beatrice and her family!!

And great narrator. I think she makes the book! I hope there is another in the series!

5+ stars and hoping for a third book!

I’m so happy book two was just as wonderful as book one. All the pieces were tied together in just the right way to answer all the questions but to wonder what is going to happen next. While there is no current plan for a book 3, I can see the potential for one. So I’m crossing my fingers and hoping!

This book has all the swoony romance you could want, and the subsequent drama that goes along with it. If you’ve read book one, you know the one dislikeable character and that remains the case here. But the true antagonist is really societal expectations and it was done in such a marvelous way.

The only character I didn’t connect with in the book is Jeff but i think it was intentional. If there was a strong connection the end would be really frustrating (I’m not telling you why, you need to read to find out 😝).

Ever other character is so beautifully crafted. Their goals, what they’re willing to do to get them, and the consequences of their action all make perfect sense and move the plot along. This is definitely a character driven book despite so much plot happening.

I found myself awing and rolling my eyes and pouting and just smiling throughout.

Brittany Presley also did a phenomenal job once again at narrating. I’m looking forward to listening to more books narrated by her!

What are you still doing here? Go read the book!

This book is a mess and I explained why in the review of the first, the things I pointed out there are still mostly true. But at least it got kind of an ending with which I can live should it be the last book in this series. But be aware that it is an open ending, so if you like set in stone happy endings this might not be the series for you