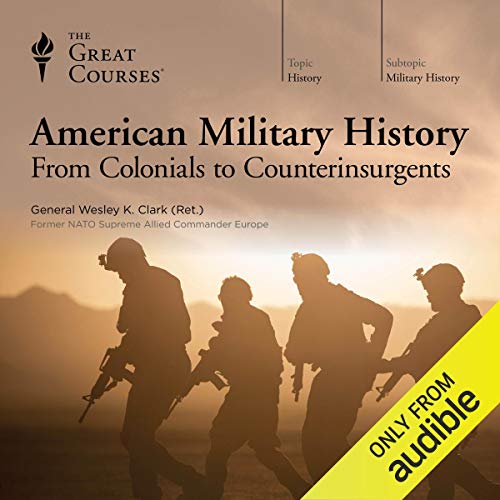 Wars have played a crucial role in defining the United States and its place in the world. No one is better equipped to analyze this subject in depth than retired US Army Gen. Wesley K. Clark - decorated combat veteran, author, Rhodes Scholar, and former NATO Supreme Commander. In this course, Gen. Clark explores the full scope of America's armed conflicts, from the French and Indian War in the mid-18th century to the Global War on Terrorism in the 21st. These 24 absorbing half-hour lectures chart the remarkable growth of the United States from a colonial backwater into the most powerful nation on Earth, thanks in large part to its talent for rising to the occasion when called to war.

Drawing on his decades of study and military experience, Gen. Clark sheds light on the tactics and strategy behind such famous battles as Yorktown, New Orleans, Gettysburg, D-Day, Inchon, and Operation Desert Storm, among many others. He also recounts his own experiences in combat during the Vietnam War, which he barely survived. This presentation is the closest most listeners will get to studying war the way military officers do - with every battle serving as a textbook for possible paths to victory.

Among the many examples, you learn that the ideal time to attack is when an opposing force is separated, distracted, and disorganized due to crossing an obstacle such as a river, as happened to British Gen. Edward Braddock's troops while fording the Monongahela River during the French and Indian War. You also learn that the fall of Fort Donelson during the Civil War was due to incoherent strategy by the Confederates, combined with brilliant tactics by Union Gen. Ulysses S. Grant, who went on to win the war for the North. In one of the last lectures, Gen. Clark gives insight into his own strategy for halting Serbian ethnic cleansing during Operation Allied Force in 1999, when he was the general in charge.

Boring, should have been titled "Battle Summaries"

On Chapter 9 of 24. The narrator clearly is very knowledgeable, but unfortunately chose only to basically give play-by-plays of major American wars and battles. Titling the content "American Military History" is pretty dishonest, actually. I expected to learn about American military strengths and weaknesses, the evolution of how we've waged war over time, the different branches' foundings, things like that. Nope. I'm disappointed to only be hearing about who fought in what battle when with details about what regiment marched along what river up to what city. Who cares? I'm not even through the Civil War yet and I'm bored of the endless descriptions of military engagements.

There is occasionally the insightful commentary I'm looking for, on military strategy, the importance of intelligence and secrecy, etc., but it comes few and far between. Overall, would not recommend.

I found the title misleading, I was looking for the bolts and nuts on the history of the military and its functions. this is just a break down of military battles and who did what. not much more than other books have already covered.

As a modern American, military history was largely ignored in the many courses I took as a history major. General Clark fills the gap -- and I don't mean the Fulda Gap! This is a non-ideological, intelligent review of the military history of the United States. G-d bless our soldiers, sailors, airmen and marines.

before reviewing; listen to the last chapter

For those whom find war and/or the military in general negatively, I (a veteran of war) would suggest reading/listening to the last chapter first... I think you will be hard pressed any combat vet that would disagree...

I was excited to purchase a lecture series by a high ranking general because I expected it would be full of insightful observations about military history. Instead the author provides a superficial account of American military conflicts. General Clark rarely stops to provide unique insight into the battles or historical eras he covers.

Clark's stumbles to a rambling ending

Clark mischaracterized key personalities and events in American military history. He emphatically claims "No more Vietnams", which he lived through. Yet, he appears to have failed to compare and contrast why Afghanistan and Iraq were likened to Vietnam. He earned the second star due to personal insights on the Balkan wars and follow on peace keeping operations despite failing to mention the restrictive Rules of Engagement. Lastly, little in first 23 lectures prepared or linked to the 24th lecture. While of the closing points are valid, he undercuts himself about the political nature of war..

For a fan of the Great Courses, this was a disappointment. Whatever Clark's merits as a general, his inexperience as educator shows. He is an adequate speaker--stiff but clear and articulate--but the syllabus is superficial and disorganized. The lectures drift haphazardly among tactical highlights, spotty historical context, thrilling to soldiery and hardware, and personal digs and name-dropping.

Clark has axes to grind, and allows his personal experience to become detriment rather than benefit to the course, forcing us to doubt his motives and thoroughness. His praise for Washington's wisdom in subordinating military to civil authority, especially, rings very hollow before the course is complete. Clark gripes incessantly about political interference in military affairs yet has nothing but praise for Andrew Jackson and Douglas MacArthur's very political insubordinations. He wallows in a stab-in-the-back narrative of Vietnam without seriously entertaining the military's own role in eroding public confidence. Though he wraps up with lip service to the notion that war must be a last resort, he never questions American casus bellorum, no matter how questionable. Insurgency and the difficulties of counterinsurgency loom large in the lectures, whether or not they played much role in any given war. If the course has a theme, it's that of protecting Clark's own legacy.

Spending as much time on and taking a harsher attitude towards Grant's later presidential administration ("one of the most corrupt and ineffective administrations in American history") than slavery ("the institution on which the South's economic and social survival depended") requires a... *special* approach to historical context of the Civil War.

For sterling examples of studies of American experience in war, I recommend instead Guelzo's American Revolution and Gallagher's American Civil War. Liulevicius's WWI, while not Amerocentric, is also excellent.

I detected some errors such as referring to the USS Reuben James, sunk by a U-Boat before the US entered WWII, as the Reuben Jones. The major error was stating Gen. John Pershing would not allow US troops to serve as replacements in Allied divisions. This is wrong because African American soldiers were sent to fight with French units rather than serving with white US units. Although this course amounted to an overview of American military history, the failure to mention the discrimination against African Americans in the armed forces & subsequent integration of the armed forces by President Truman in 1948 as a part of our military history is a major omission.
FHH, COL USA (Ret)

Although I'm sure the information in the book is excellent, but I will never know for sure because General Clark should not ever be the voice for any of his or any other books. He is a terrible orator. And I can't get past it.

A sweeping overview of the different wars of our history. Pretty good reference for further reading.