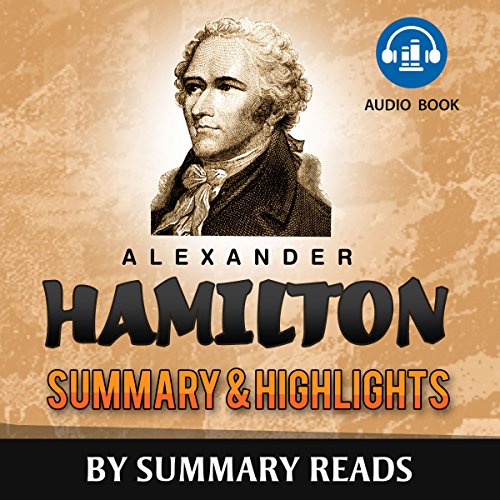 This story of Alexander Hamilton details a true story of an American Revolutionary war hero who was a true founding father. Hamilton was born in disarray in the British West Indies. He escaped a life of meaninglessness and moved to New York as a teenager where he set his feet in political and military prowess.

Over the years, he worked with the greatest leaders in American history. He was the chief of staff to General Washington in the Revolutionary War and his Secretary of the Treasury in his two presidential terms.

Hamilton was a man who deeply cared for his family and his duty. Even into his death, he maintained a sense of responsibility future generations should take note of.

Inside this Summary Reads summary and highlights of Alexander Hamilton:

Avoid at all costs

This was superficial shallow and nearly devoid of useful information about the book or the subject. Wikipedia likely provides more information on Hamilton than you’ll derive from this. Will be the last time i audible one of these. Don’t repeat my error. You’ve been warned.

It was a concise and useful summary, read by an appealing and capable narrator. My only criticism is of the format. Each (short) chapter begins with the narrator saying: "Chapter X, Summary and Highlights," and ends with "Best Quote: "... ......'". With such short chapters, and the reader's foreknowledge that they purchased the "Summary and Highlights" version of the book, these running headlines are an unnecessary and distracting nuissance. I don't see myself buying this summary format again.

Not the full book