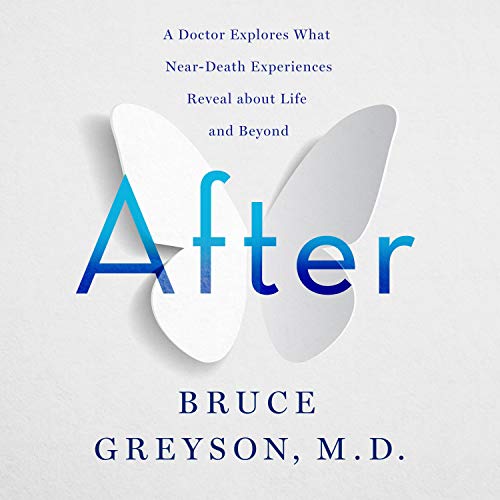 This program includes three bonus interviews with the author.

The world's leading expert on near-death experiences reveals his journey toward rethinking the nature of death, life, and the continuity of consciousness.

Cases of remarkable experiences on the threshold of death have been reported since ancient times, and are described today by 10% of people whose hearts stop. The medical world has generally ignored these “near-death experiences”, dismissing them as “tricks of the brain” or wishful thinking. But after his patients started describing events that he could not just sweep under the rug, Dr. Bruce Greyson began to investigate.

As a physician without a religious belief system, he approached near-death experiences from a scientific perspective. In After, he shares the transformative lessons he has learned over four decades of research. Our culture has tended to view dying as the end of our consciousness, the end of our existence - a dreaded prospect that for many people evokes fear and anxiety.

But Dr. Greyson shows how scientific revelations about the dying process can support an alternative theory. Dying could be the threshold between one form of consciousness and another, not an ending but a transition. This new perspective on the nature of death can transform the fear of dying that pervades our culture into a healthy view of it as one more milestone in the course of our lives. After challenges us to open our minds to these experiences and to what they can teach us, and in so doing, expand our understanding of consciousness and of what it means to be human.

Helped me process my own experience

I had a brush with death a couple years ago - struck by lightning of all crazy things...

I was struck about 8pm the day it happened. My last memory before the lightning strike was 9am that day. And then I woke up in a hospital 3 days after the event. I’d actually been awake for a day or so, but my memory hadn’t been functioning - the drugs used to put me in a medically induced coma can apparently have that effect on memory.

I remember nothing between those two points. I didn’t have a near death experience.

This book brought me much peace about my experience. (And brought about a spiritual experience for me.) My feelings of guilt are gone. I’ve drawn a deeper meaning from my experience now.

I only wish I’d listened to this book sooner!

This is in my opinion a game changer. Much like the original "Life After Life" book by Raymond Moody in the 70's. however, instead of story after story until your eyes glaze over. Dr. Greyson talks about the scientific method. The legitimacy and place of anecdotal evidence in the framework of the scientific method. He also speaks to his own natural skepticism and medical understanding of the brain equals mind problem. All in all a really good introduction to seekers. This will appeal to open minded but healthy skepticism oriented people as well as a great introduction to new comers to the subject.

As for the narrator who also participates in an interview with Dr. Greyson at the end of the Audible presentation. He brings an open minded respect to the material. Often a professional reader will read a non fiction book in a monotonous drone. or show very little interest or respect or be a gushing true believer. This narrator respected the authors work and read with the same interest and discovery as I had as a listener. Good job.

The Audible version also has a series of interviews conducted by Doctor Greyson with the narrator (sorry, I forget his name but it's on the cover of Audible), Dr. Eben Alexander and Dr. Raymond Moody.

Mainly the science of what NDE’s are NOT

If you’re looking for several detailed NDE stories in a book, keep looking. Greyson is a physician and thus a scientist. Most of the book is the science as to why the NDE is not mental illness, not seizures, not a result of stimulation of certain areas of the brain, etc...

An excellent book, but not likely what most persons looking for a book on NDE’s is seeking. If you want to understand what NDE’s are NOT, with supporting evidence, this is your book.

this work shows that there is so much more to Consciousness than brain activity. in fact the trend seems to be the less brain activity the more the experiencer experiences.

Credible, in line with people's experiences

You may have had a near death experience (NDE); I did once. But there are several types and the out of body ones were the most interesting to me. Unfortunately, the performance wasn't the best fit for a book like this.

The narration makes this book a bumpy ride. The narrator used rising intonations in the middle of sentences. This breaks up the author's thought processes and makes you work harder.

I think it's a credible book, and I believe it all to be direct.

As an intensive care doctor and as a person who lost loved ones, I did find this book to be soothing, and even healing. A guide to deeper understanding about who we are and that we actually have no idea about how our consciousness works

Possibly the best NDE book I have ever read

Awesome, informative, great NDE shares. I will read again, it's so packed with knowledge, it's worth a second read.

I am a fan of Bruce Greyson's work.

Sometimes, when doctors and researchers write about their work they go into too much detail about the research design for my taste. I understand that they are trying to give their work credibility and are used to writing for peer review. The way to do it it seems with these topics is to make them as boring as possible. In places, this is no different. Until "Real Magic" Dean Radin did the same thing. In an attempt to be taken seriously these researchers have had to develop a talent for making the most interesting topics ever into something as dull as dishwater. And they still aren't taken seriously so why not present them with the sense of wonder they inspire?

The personal story of how he came into this research was very interesting as were the recounting of people's NDE's.

The narration gave me a headache after a while. Dry and flat.

Still, if you are into his work and this subject it is a good listen, especially the few veridical experiences presented.

Dr. Greyson has done an amazing job of looking at the phenomenon if NDEs in a very deliberate and scientific manner and turning it into a fascinating easy to listen to book.