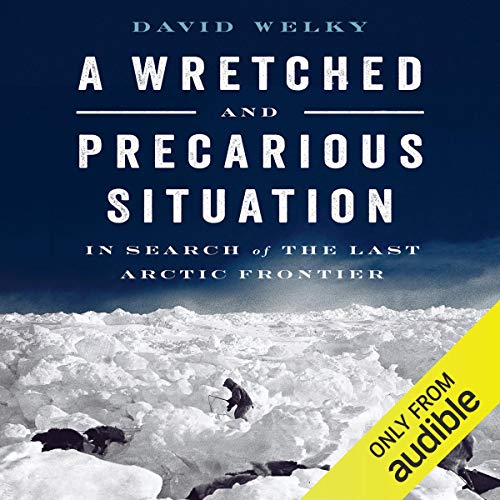 A Wretched and Precarious Situation

A remarkable true story of adventure, betrayal, and survival set in one of the world's most inhospitable places.

In 1906, from atop a snow-swept hill in the ice fields northwest of Greenland, hundreds of miles from another human being, Commander Robert E. Peary spotted a line of mysterious peaks looming in the distance. He called this unexplored realm "Crocker Land". Scientists and explorers agreed that the world-famous explorer had discovered a new continent rising from the frozen Arctic Ocean.

Several years later, two of Peary's disciples, George Borup and Donald MacMillan, assembled a team of amateur adventurers to investigate Crocker Land. Before them lay a chance at the kind of lasting fame enjoyed by Magellan, Columbus, and Captain Cook. While filling in the last blank space on the globe, they might find new species of plants or animals, or even men; in the era of Jules Verne and HG Wells, anything seemed possible. Renowned scientific institutions, and even former president Theodore Roosevelt, rushed to endorse the expedition.

What followed was a sequence of events that none of the explorers could have imagined. Trapped in a true-life adventure story, the men endured howling blizzards, unearthly cold, food shortages, isolation, a fatal boating accident, a drunken sea captain, disease, dissension, and a horrific crime. But the team pushed on through every obstacle, driven forward by the mystery of Crocker Land and faint hopes that they someday would make it home.

Populated with a cast of memorable characters, and based on years of research in previously untapped sources, A Wretched and Precarious Situation is a harrowing Arctic narrative unlike any other.

it all comes together at the end

This was a pretty good, well-researched book. It has a lot of characters so that gets a little confusing as the book goes on. I'm glad to have finished it but I dont know if I got the most out of it, because the same events seem to happen a number of times and it is very easy to lose track of the narrative. That said, I found myself riveted to the last third of the book. (ok maybe the last quarter) since the list of characters was thinning out and made it a bit more simplified. I dont mean to imply the book is poorly written - it is a miraculously well-woven book and I can't imagine it having been done better while still including so. much. information. I do think, however, if it had been maybe two thirds the length, it could have been condensed to the most juicy & fascinating events and I would have finished it a lot faster. Then again it was written a lot more like a giant (sometimes dry) essay almost, so it seems clear the goal was more facts and backstory rather than being juicy and easy to read. I liked it a lot more once I finished it, because everything really wraps up nicely in the end.

I did indeed struggle to finish this highly overrated book. No detail was too small to include in this book. The story could have been told in 3 hours. At times I completely tuned out and when I picked it up again realised I had missed nothing. I wanted to demand it get to the point yet when it did I hardly was aware of it. Wish I had not wasted this credit. The narration wasn't THAT bad. He simply had a long, drawn out, boring, story to tell. Spend credits on " Endurance " and skip this sleeper.

If you're the adventurous type.....

Then dive into the world of Artic exploration with its swelling blue seas and white-caps, it's massive blue-white icebergs, and it's expansive whiteness of nothingness. Yet, to the explorer, there is in that nothingness of white, everything. Those of us, myself included, who now live vicariously through books such as this, will not be disappointed in this Illyad-like adventure story which has it all. As in any good adventure story, this Artic exploration holds the promise of discovery, the certainty of danger, the brutality of death, the heart of romanticism, and the soul of a philosopher-poet. Such a tale told in an audio book is a real treat, especially if you have maps in front of you to help trace the path trod by these brave and daring men seemingly made of
the same grit, strength, and relentlessness as the northern-most terrain and weather. Beyond that, the narrator did a beyond superb job of telling the tale with a variety of a cast of characters mixed with passion and composure. Five stars across the board!!!

I had some doubts choosing this book. What could be told that I had not heard before in North Pole excursion books. This book tells the human story of McMillan's expedition in an interesting, lively flow, never becoming repetitive or boring. A wonderful book.

This was a very dry straight forward history. Partly because most arctic exploration is a story of hardship and disappointment and of course the shadow of shackleton’s shadow looms over all polar exploration. But still feel the story could have had more life. The narrators voice and tone were fine but his pronunciation of words like Inuit were miserable. The good news is a much great appreciation for Macmillan who is often under peary’s shadow. Would like to learn more about his adventures in the Bowdoin. My favorite thing of the book is learning that I can sign my name just like Macmillan with bowdoin ‘98 exactly 100 years between our graduations.

Fascinating story expertly woven together from first person accounts - a piece of forgotten history that needed to be uncovered.