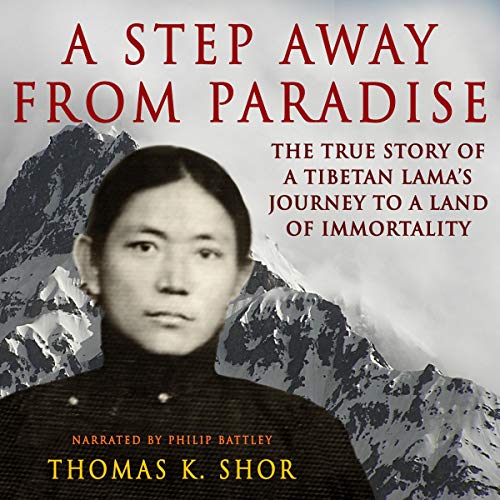 A Step Away from Paradise

It was the early 1960s. The place, a far-off corner of the Himalayas long fabled in Tibetan tradition to be hiding a valley of immortality among its peaks and glaciers - a real-life Shangri-La. They waited generations for the prophesied lama to come, the one with the secret knowledge of how to "open" the Hidden Land. Then, one day, he came. His name was Tulshuk Lingpa.

This book tells the true story of this charismatic visionary lama and his remarkable expedition. Against the wishes of the kings of both Sikkim and Nepal, he and over three hundred followers ventured up the snowy slopes of the third highest mountain of the planet. Their aim: to open a crack in the very fabric of reality and go to a land we would all wish to inhabit if it were only there - a land of peace and concord.

Forty years later, the author spends over five years tracking down the surviving members of this extraordinary expedition. He deftly weaves their stories together with humor, wisdom, and scholarly research into Tibetan traditions of Hidden Lands, all the while reflecting on what this means for the rest of us.

“Like no other book I have ever read…a riveting tale of adventure…honest to the real spirit of Tibet…both unique and intriguing…an engrossing read. Highly recommended.” (Jetsunma Tenzin Palmo, from the Foreword)

From Tulshuk Lingpa’s Guidebook to the Hidden Land:

“Don’t listen to anybody. Decide by yourself and practice madness. Develop courage for the benefit of all sentient beings. Then you will automatically be free from the knot of attachment. Then you will continually have the confidence of fearlessness and you can then try to open the Great Door of the Hidden Place.”

What would have happened...

If Lewis Carroll had proclaimed the reality of Alice’s Wonderland? What if he had gathered a following and launched an expedition?

This a a fascinating and well written book. The people who were showcased told their stories with heart and honesty. The author created a well researched and thoughtful book. I was sorry to see it end. The narration was excellent, I couldn’t ask for better. I would recommend this book to everyone. I was moved and entertained all at once. A true must read.

I first read the paperback version and loved it. When I heard the audio book had come out, I just had to get it. Sometimes the movie of a book or the audio book can ruin the experience you had while reading. But not in this case! The way it was narrated brought out aspects of this true story I didn’t get in the first reading, layers of meaning beneath the surface. Now I want to read the book again! Such a magical, yet true story from the Tibetan world. A great book for anyone with a sense of wonder. No need to have an interest in Tibet, Buddhism, or any other belief for that matter. A real human story of what we all wish for, somewhere deep down inside: a place of peace, free of strife and troubles. I’d give it six stars if I could!!

I loved this amazing book. The author invested so much of himself, his time and talents into researching this fantastic story. His writing style is impecable and the narration of the audio book was delightful. Will be looking for more of his books now.

A wonderful book and story

This book is not only an amazing story, but also a phenomenal piece of research into the Nyingma Tradition of Tibetan Buddhism. As a 25 year student of Nyingma teachers and Lamas, this book is a beautiful reference to the Nyingma lineage and the most esoteric aspects of Tantric practice. I recommend it highly.

Inspiring, thrilling and powerful, I suspect I will be thinking about this account for a very long time.

This book works beautifully on multiple levels: as a mind-bending logic-defying story of modern day magic and adventure, as a brilliant revelation of the depth and power of human meaning-making in difficult situations, and—for Western people like myself with an interest in Vajrayana Buddhist practice—a precious example of how Buddhist doctrines of karma, pure view, emptiness and compassion can be *lived* experience.

I could not get into this book. I did not care for the fake laughter. I seemed more like a fairy tail than a non fiction.

A great story, often a bit complicated, but narrated superbly. The narrator makes the people come to life, giving them accents and emotions that lift the text into a more living reality.

Imagine Dune set against the snowy Himalayas instead of a desert planet and “spice” as a sacred hidden land prophesied thousands of years earlier. My favorite Audibel experience. As a dharma practitioner, a wilderness guide and a reader of fables to my toddler, I found all of it like a blanket made of cloud cover, constantly changing with each detail, but always gorgeous. Smart and understated as in old classics like Kidnapped and Treasure Island, but with fantastic twists from the hidden realms of the Himalaya. Worth a year’s worth of Audibel membership.

This is an astounding story told with the insight and compassion worthy of a true practitioner of the dharma. It is rich in detail, nuance and consumate word smithing....obviously thoroughly researched. On its way to becoming a true classic in the tradition of Alexandra David-Neal’ s “Magic and Mystery in Tibet”, a most riveting read!!!

I will listen to this again starting today as it is that well told and written. Further, I am buying the book to have on hand.
This is a great book for Western Vajrayana Buddhist as it tells a story of The Tibetan World but is written by someone who wrote for our Western Minds. It is for each reader to decide if you believe this all or not. I have spent many years with Tibetan Buddhist and know that this is their World. Us westerners have difficulty with that which is not physically measurable or tangible. That’s our limitation
It is great up to the last word! Thanks

This book, like both its author and protagonist, cannot be put into a box, or any boxes. It's a biography, a travelog, a treatise on Himalayan culture and tradition; most of all - a challenge for your beliefs and attitudes towards all things irrational and outside your box.
It made me chuckle, it made me raise my finger once or twice, and had a very consoling and soothing effect on me.
Excellent speaker too.