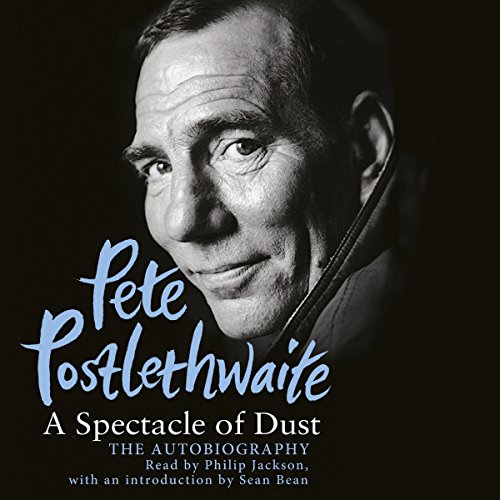 A Spectacle of Dust

Read by Philip Jackson with an introduction by Sean Bean.

After training as a teacher, Pete Postlethwaite started his acting career at the Liverpool Everyman Theatre, where his colleagues included Bill Nighy, Jonathan Pryce, Antony Sher, and Julie Walters. After routine early appearances in small parts for television programs such as The Professionals, Postlethwaite's first success came with the acclaimed British film Distant Voices, Still Lives in 1988. He then received an Academy Award nomination for his role in The Name of the Father in 1993. His performance as the mysterious lawyer "Kobayashi" in The Usual Suspects is well-known, and he appeared in many successful films including Alien 3, Brassed Off, The Shipping News, The Constant Gardener, Baz Luhrmann's Romeo + Juliet (as Friar Lawrence), and in Inception with Leonardo di Caprio.

Pete's story of the love of his craft

I enjoyed the narration of this book but think I would have lost interest if reading it. The narrator spoke in Pete's voice which kept me glued but he went into so much detail on every aspect of his craft that I felt it was more a text book for actors than of general interest to a layperson. This does not detract from his total dedication to fine tuning that craft and I am a great admirer of his work and will look up movies that impressed me at the time. As he says, his face is no oil painting but his love of his chosen path shines through on screen. Unfortunately, the opportunity to see him acting on stage was never possible. I would have loved to have witnessed his "King Lear". His complete lack of regard to his health with heavy drinking, drugs and smoking seem an anathema for one so dedicated to his career. That he had the love and respect of his peers and total commitment to his family makes his early death so much sadder.

I am very glad Pete shared his life with us through this memoir. A testament that people can make it in this arena and remain human, kind, just, and civil and still be a raving success in the entertainment industry. This was a fine gift to leave behind for anyone who has ever been or will be part of the entertainment industry. I loved the memoir.
Just one big positive, real, sincere gush. A pleasure to read and a joy to view life and entertainment through Pete's eyes. A book you will not forget.

Well worth listening to.

What a great audiobook. I thought it would be quite boring at first when he talks about his love of King Lear but it develops into a great, honest story of a guy who just wanted to have fun. The ending is heart wrenching.