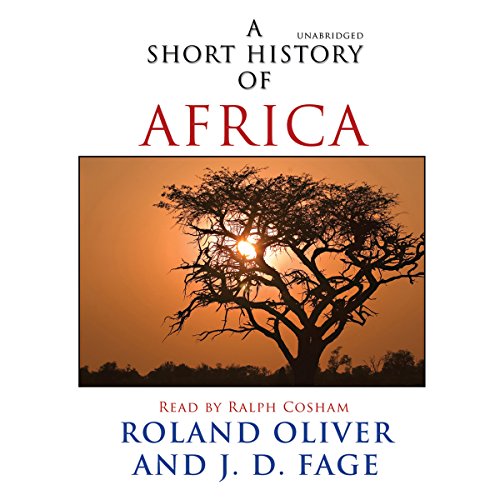 A Short History of Africa

Dramatic alterations in political power have corrected the once prevalent vision of a European-centered world. While the centers of European culture flourished, decayed and sprouted in turn, empires in Africa rose, ruled, resisted, and succumbed. Much of Africa's past has now been excavated from ignorance and error, revealing a rich and previously little-known human heritage.

This classic work draws on the whole range of literature about Africa as well as evidence provided by archaeology, oral traditions, language relationships, and social institutions. It marshals the most authoritative views of African specialists into an absorbing narrative and puts forward original conclusions that take the study of Africa a stage further.

"Geoffrey Howard delivers a flawless narration, twisting his tongue around not only the native African words and places, but also the multitude of European languages. Howard's reading is slow enough for the listener to contemplate the issues and events, yet fluid enough to entice the listener to learn what happens next." ( AudioFile)
"Well researched, well written, well presented...Howard's crisp English accent adds an air of importance to the text." ( KLIATT)

After finishing "the African Experience" series of lectures by the Great Courses (produced by the Teaching Company), I was left wanting a little more chronological history that tied things together a little better. This book was the perfect supplemental to that series, as it provided an excellent, traditional history of the continent.

Comprehensive scope. From prehistory all the way through recent events, with a good distribution between periods.

The whole continent. For such a short work spanning such a long time scale, I was impressed that they didn't cut corners. Northern Africa is included as part of Africa, showing the full range of historical patterns and trajectories. Many "short" histories, and even many not-so-short ones, cut out Northern Africa as some kind of anomaly. This book manages to nicely incorporate Egypt, Libya, Morocco, Chad, Sudan, and others into the whole of African history. It's very interesting to see the flows of trade, people, ideas, and even the conflicts that have traversed the Sahara going back to ancient times as an integral part of the unique dynamics of the continent.

Focus on the big picture. This book does a really nice job taking so much time and space, so many peoples and places, so many cultures and religions, and synthesizing them into a workable narrative. You get a great sense of the larger story of African histories.

Multiplicity. In doing the above, the book doesn't shy away from the uniqueness of each region, sub region, nation, and all the cultures of the continent. The authors strike a good balance between the forest and the trees--managing to touch all the big bases with enough detail to provide substance without getting caught up in the minutia.

I'm especially pleased with the rather nice treatment of the ancient history in all the various regions, and likewise with medieval and colonial history, while still managing to give an impressive, sweeping account of everything you'd expect to hear about in the modern history (and some, like the West Saharan conflict) that I was surprised got more than a casual mention. The whole thing follows a well written narrative that bounces between all these geographical areas without the reader noticing or feeling disoriented.

If there's one criticism to make, I suppose it would be that to do all this in such a short volume leaves little room for historical controversy. Most of the book is a factual narrative style that sometimes glosses over, and other times skips entirely, some of the big historiographic questions. There's not enough time to go over competing hypotheses in detail, although the Authors do a decent job in several notable examples. Which is fine, just be aware that if you research more you'll uncover some distinctions regarding dates and exact chronologies, etc. But this is meant to be an overview and it's quite a brilliant one, so one can't expect exhaustive examination of each argument every time there's some ambiguity in the sources or in the archaeological record.

I've had trouble finding a book about African history before European conquest. This one is exactly what I am looking for and the only negative is that it is 30 years old. I assume that a newer book would have more current information.

good overview overall. the bit on the colonial period was disappointing however. the author comes across as an apologist for colonialism in general and British colonialism in particular. his benign view of British colonialism is bolstered by reference to official British proclamations that clearly had little relation to the effects of the colonial system on the lives of ordinary Africans. he is note forthright about the negative effects of colonialism as practiced by other European powers such as France, Spain, Portugal and Germany. the assessment of the situation in apartheid south africa is also wanting . that being said, the book was published in the late 80s and a lot has changed since then. still worth the read for insights into Africa's deep history and the early post colonial period.

This book was last updated in 1986. It is extremely outdated, not just in its discussion of modern African history, but in not including the last 30 years of African archeological and anthropological data about early African history. Also, it's a very Eurocentric history.

This book sketches an outline of African history that crams a lot of details into a short space. It's a bird's eye view without much "living color," but it gives you a useful road map.

The language of this text is quite out of date, actually referring to black people in Africa as "colored" - quite out of date for modern language, especially when other ethnic groups are identified by actual names instead of outdated language.