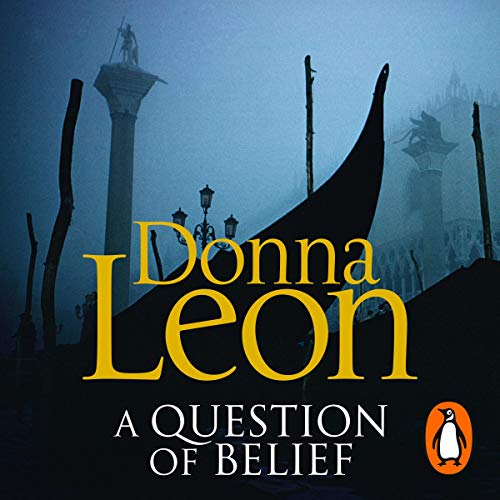 A Question of Belief

As Venice experiences a debilitating heatwave, Commissario Brunetti prepares to escape the city and spend time with his family in the mountains. However, the weather is the last thing on Ispettore Vianello’s mind; it seems his aunt has become obsessed with horoscopes and has been withdrawing large amounts of money from the family business. Not knowing what to do, he consults Brunetti and asks permission to unofficially trail her, which leads to the flat of Stefano Gorini. But who is this man? And why is Vianello’s aunt giving him large amounts of money?

A few days later, Brunetti receives a visit from a friend who works at the Commune. It seems that discrepancies have been occurring at the Tribunale involving Judge Luisa Coltellini and Araldo Fontana, an usher with a flawless track record. While having coffee with friends, Signorina Elettra soon discovers that Fontana is living in a luxurious apartment on the Misericordia. But how can an usher afford such an expensive apartment, and what is his involvement with Judge Coltellini? Brunetti asks Signorina Elettra to investigate further but the computer system at the courthouse is down, and so Brunetti leaves with his family for their holiday.

When news reaches Brunetti that the usher from the Tribunale has been murdered, in a violent attack in the courtyard of his home, he returns early to investigate. It soon becomes clear that Araldo Fontana was a good man, so why would someone want him dead? And, does Judge Coltellini have anything to do with it?

"Leon’s books are a joy and the 19th Venice-based Commissario Brunetti novel is well up to her consistently high standard. All the Leon hallmarks are here: clear, unshowy writing, atmosphere, humanity and believable characters." ( Laura Wilson, Guardian)
"Leon excels in the claustrophobia of families, the Italian class system and the sinister aspects of Venice that the tourists don’t see." ( Marcel Berlins, The Times)
"Leon never fails to impress with her carefully wrought plots and believable characters." ( Carla McKay, Daily Mail)
"A welcome addition to a hugely popular series with an unparalleled feel for the glorious city of Venice." ( Waterstone’s Books Quarterly)
"This novel is beguiling in its many well-observed details about human nature and daily life in Venice." eurocrime.co.uk