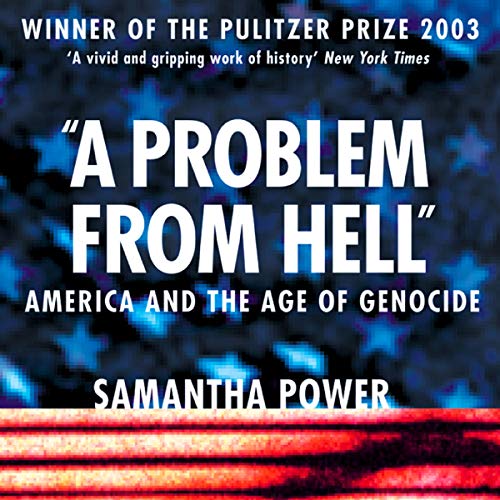 A Problem from Hell

A Problem from Hell

Winner of the Pulitzer Prize for Non-Fiction 2003

A shattering history of the last 100 years of genocidal war that itemises in authoritative, persuasive manner exactly what the West knew and when, and what it chose to do, and what not to do, with that knowledge.

Winner of the US National Book Critics Circle Award

‘The United States has never in its history intervened to stop genocide and has in fact rarely even made a point of condemning it as it occurred.’

In this convincing and definitive interrogation of the last century of American history and foreign policy, Samantha Power draws upon declassified documents, private papers, unprecedented interviews and her own reporting from the modern killing fields to tell the story of American indifference and American courage in the face of man's inhumanity to man.

Tackling the argument that successive US leaders were unaware of genocidal horrors as they were occurring - against Armenians, Jews, Cambodians, Kurds, Rwandans, Bosnians - Samantha Power seeks to establish precisely how much was known and when, and claims that much human misery and tragedy could readily have been averted. It is clear that the failure to intervene was usually caused not by ignorance or impotence, but by considered political inaction. Several heroic figures did work to oppose and expose ethnic cleansing as it took place, but the majority of American politicians chose always to do nothing, as did the American public: Power notes that ‘no US president has ever suffered politically for his indifference to its occurrence. It is thus no coincidence that genocide rages on.’ This riveting audiobook makes a powerful case for why America, as both sole superpower and global citizen, must make such indifference a thing of the past.

"Deeply researched and trenchantly argued. A devastating indictment not just of the American foreign policy establishment but of the country’s entire political class, the media and even the wider public." (Niall Ferguson, Sunday Times)

"Power is part of an inspiring generation of political thinkers who are academically brilliant but who also know how to write." (David Hare, Books of the Year, Observer)

This book will give you the basis to understand the concept of genocide !

This is an essential book to read in order to understand the evolution of genocide and the need to oppose state monopoly and defend democracy.