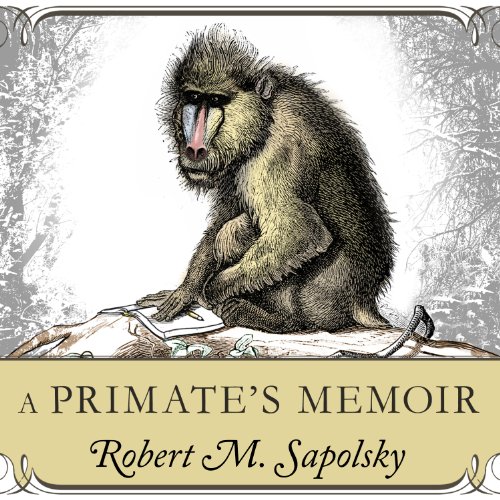 "I had never planned to become a savanna baboon when I grew up; instead, I had always assumed I would become a mountain gorilla," writes Robert Sapolsky in this witty and riveting chronicle of a scientist's coming-of-age in remote Africa. An exhilarating account of Sapolsky's twenty-one-year study of a troop of rambunctious baboons in Kenya, A Primate's Memoir interweaves serious scientific observations with wry commentary about the challenges and pleasures of living in the wilds of the Serengeti-for man and beast alike.

Over two decades, Sapolsky survives culinary atrocities, gunpoint encounters, and a surreal kidnapping, while witnessing the encroachment of the tourist mentality on the farthest vestiges of unspoiled Africa. As he conducts unprecedented physiological research on wild primates, he becomes ever more enamored of his subjects - unique and compelling characters in their own right - and he returns to them summer after summer, until tragedy finally prevents him. By turns hilarious and poignant, A Primate's Memoir is a magnum opus from one of our foremost science writers.

"Filled with cynicism and awe, passion and humor, this memoir is both an absorbing account of a young man's growing maturity and a tribute to the continent that, despite its troubles and extremes, held him in its thrall." ( Publishers Weekly, Starred Review)
"Mike Chamberlain narrates this work by primatologist Robert M. Sapolsky, who went to Kenya to study baboons. Chamberlain's lively, bemused tone communicates Sapolsky's down-to-earth approach and sense of humor. Sapolsky's writing is eminently approachable for the layperson, and the listener soon begins to feel acquainted with the various baboons in the troop and to see certain similarities between their behavior and those of the human world. Through the amusing moments and the trials and tribulations, Chamberlain's energetic narration provides a great complement to the author's quirky personality." ( AudioFile)

One of the best books I've ever read.

I admit I went in biased having watched all his youtube lectures and read his other books, but this book was so satisfying as a narrative and so beautifully written, I'm having trouble recalling when I've ever enjoyed a book so much. "To Kill a Mockingbird" comes to mind as a perfect piece of literature. This book is so close, I'll probably think of it as my second all time favourite from now on. The only thing that would have made it better for me would be to have it read by Sapolsky. But the narration was good anyway.

a bit of animal behavior and bit of travel log.

It's not that Mike Chamberlain's voice is annoying, it's not bad, but he reads this book like he reads a news article. There is a lot of humor in the story that is actually missed by the reading of it. The humor and sarcasm is rolled over so that it hidden. The story itself is about a Jewish American grad student who is studying baboons in Africa. He ends up becoming part of the place and learning more about human nature than he ever imagined in the process when dealing with African bureaucracy and tribal ways. I wasn't really sure what year this book was originally written which would have really helped to understand what was going on in the country he was in where he was traveling to at the time. I wish Audible would publish the original pub dates of the books it narrates.
I might recommend reading this one instead of listening to it, but it's not a waste if you do listen to it.

This book, part memoir, part science, part philosophy, touched me deeply and taught me much about the tragicomedy of primate lives.

A Personal Memoir of the life of a researcher

I had heard lectures by Robert Sapolsky on the internet and was expecting this to be a more in depth science discussion along with some personal experiences.

It turned out to be a memoir of his personal experiences in Africa. His experiences are of two cultures - one human and one Baboon.

At first I was a little disappointed in that there was little scientific discussion of his research. Secondly I didn't like the reader and the writing was odd to say the least. To give credit to the reader, he did the best he could with the strange writing.

None the less, the memoir is authentic and heartfelt. I would not have missed it. Well worth struggling through with the strange delivery.

The power of the message is such that it is hard to rate the book. It probably deserves better than 3 stars but I can't go higher with such strange writing. I will say that the writing is not what is typically encountered as "poor" and "amateurish". The writing is just odd, mixing references to current events, cultural phenomena, Baboon interaction described as animal behavior but lapsing often into human behavior, etc. I wonder if a younger reader (I am retired) could even follow it. The book needs one of those sidebars to explain the odd language and references.

The book gives lots to ponder and to wonder about. The book is a gift of sorts by Sapolsky to everyone else.

Sapolsky is eclectic and enthralling!

Where does A Primate's Memoir rank among all the audiobooks you’ve listened to so far?

As far as memoirs go, probably the best (and considering he was collecting scientific data the whole time, probably the most accurate too).

What was one of the most memorable moments of A Primate's Memoir?

Sapolsky's recollection of the story of Dian Fossey, her life, her controversy, her murder, and his fascination with her & her gorillas. He recalls a rather harrowing hike to where she researched, and her burial site in Rwanda.His stories of stalking his baboons with a blowgun loaded with sedative darts were very entertaining.

He's a good narrator, and his other readings I've enjoyed, but in this book he failed to grasp Sapolsky's style of prose and humor. To anyone that has spent time listening to him lecture, Chamberlain looses a lot of depth in translation. For instance when reading some passages clearly intended to be humorous (because he's also told these jokes during class lectures at Stanford), Chamberlain reads them in a more flattened tone, failing to communicate much of Sapolsky's wit and style.

Beware of beef at tourist lodges in Africa.

It's interesting and somehow comforting how much we have in common with animals, especially primates. An amazing story well told. Thank you, Robert.

Robert Sapolsky’s “A Primates Memoir” is a masochist’s guide to Africa. It is what you expect from a biological anthropologist who sojourns to Africa in the late 1970s. Sapolsky lives in a tent while studying baboons. At the age of 12, Sapolsky appears to know what he wants from life. In his middle-school years, he begins studying Swahili, the primary language of Southeast Africa. He wants an understanding of life.

Sapolsky’s Ph. D. thesis, written in 1984, is “The neuroendocrinology of stress and aging”. Presumably, his trip to Africa became the basis for his academic thesis. Sapolsky’s experience in Africa is recounted in “A Primate’s Memoir”.

The overlay of Sapolsky’s memoir is the reported evolution of a baboon family in Southeast Africa. He shows that baboon families, like all families, are born, mature, and die within a framework of psychological and physical challenges imbued by culture. All lives face challenge but culture can ameliorate or magnify the intensity and consequence of the challenge.

Sapolsky’s memoir shows he clearly lives an unconventional life, but it seems a life of purpose. What more is there?

Yes and I already did. Although the book is supposedly about baboons, it makes one question a number of philosophical questions like evil and good, free will, meaning/meaninglessness of life. It also raises issues about world politics...

The narration and characterization of the baboons is so powerful. At the end of the book, I wanted to desert humans and start a new life with the baboons.

Which character – as performed by Mike Chamberlain – was your favorite?

It made me laugh and cry

Seriously, my favorite book EVER!

I wish I could give a copy to everyone on earth. we should all read this and "The Railway Man" by Eric Lomax

Robert Sapolsky is well known among people who follow (try to follow) primatology and evolutionary biology, including human evolutionary biology. A Primate's Memoir alternates (sort of) chapters of Sapolsky's observations of a specific baboon troop over many years with stories of his personal adventures traveling in Africa more or less as Africans travel. Those chapters made me eager to get back to the baboons. Because visitors from American tended to have with them such items as antibiotic ointment and other basic first-aid supplies, nearby villagers brought their sick children to him, and he gradually became somewhat assimilated into the village. Like me, Sapolsky is proud and happy to identify as a primate and to explore the question of what does it mean to be a talking ape.