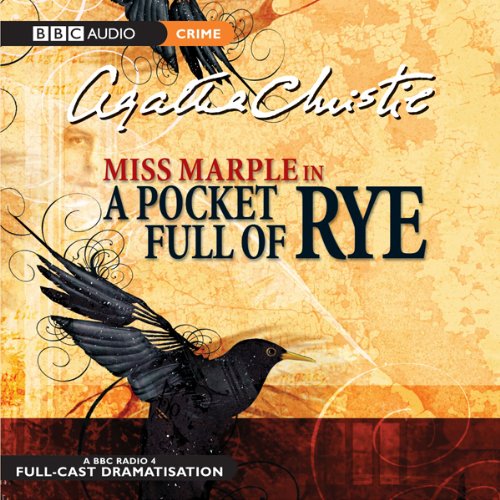 A Pocket Full of Rye (Dramatized)

Wealthy businessman Rex Fortescue is found dead with rye grain in his pocket. His death is followed in quick succession by a woman dying while eating bread and honey, and a maid in her garden.

Inspector Neele, in charge of investigating the spate of murders, consults with Miss Marple, who has an interesting and surprising theory to offer. She senses the murderer is dispatching his victims on the basis of the children's nursery rhyme 'Sing a Song of Sixpence'.

I love June Whitfield’s portrayal of Miss Marple. Her voice is far-and-away the best version of the character out of any Marple audiobooks I have listened to, and it fits perfectly with the way I’ve always imagined Miss Marple.

I love these BBC radio productions. The sound effects and multi person cast really bring the story to life. June Whitfield does a fabulous job as Miss Marple.

This was an enjoyable book. There is a reason Agatha Christie's books have lasted so long. The dramatization was well done too.

But What About Blackbirds?

As with all of the BBC radio productions, this one was expertly cast and a thorough delight to listen to.

How has the book increased your interest in the subject matter?

Why do I feel like this question was intended for a non-fiction book? If you haven't listened to one of these full-cast productions, this will probably make you want to check out more of them.

Does the author present information in a way that is interesting and insightful, and if so, how does he achieve this?

Hmmm....another question for a non-fiction book. It seems Mr. Audible thinks A Pocketful of Rye is a book about the history of growing rye in Britain.

What did you find wrong about the narrator's performance?

A pocket full of Rye

excellent performance!! well adapted for listening! would purchase another such full cast audio book again. in fact will so today. Thank you!

Ever since my first introduction to The Queen of Crime, I've loved reading her books. I got this book as a way to read one of my favorite Miss Marple stories again. I loved the dramatized version as I felt I were there! I will always recommend Agatha Christie as an author and now I will recommend any BBC Radio dramatized production.

Easy listening, not to hard to find out :)