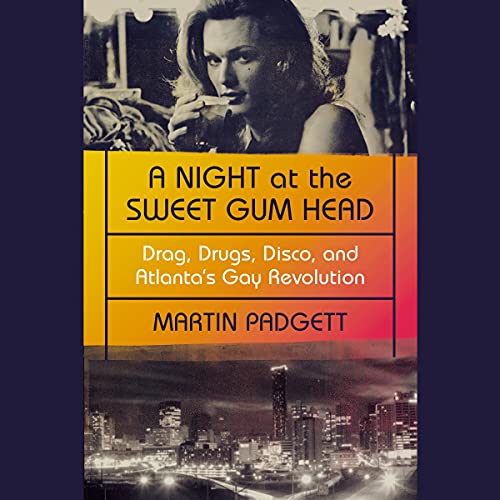 A Night at the Sweet Gum Head

An electric and intimate story of 1970s gay Atlanta through its bedazzling drag clubs and burgeoning rights activism.

Coursing with a pumped-up beat, gay Atlanta was the South's mecca - a beacon for gays and lesbians growing up in its homophobic towns and cities. There, the Sweet Gum Head was the club for achieving drag stardom.

Martin Padgett evokes the fantabulous disco decade by going deep into the lives of two men who shaped and were shaped by this city: John Greenwell, an Alabama runaway who found himself and his avocation performing as the exquisite Rachel Wells; and Bill Smith, who took to the streets and city hall to change antigay laws. Against this optimism for visibility and rights, gay people lived with daily police harassment and drug dealing and murder in their discos and drag clubs. Conducting interviews with many of the major figures and reading through deteriorating gay archives, Padgett expertly recreates Atlanta from a time when a vibrant, new queer culture of drag and pride came into being.

"A fizzy tale of civil rights, quaaludes and music.... When stories such as these get told, it is a cause for celebration." (Elon Green, The New York Times Book Review)

"A portrait of the wild and wooly Atlanta of the 1970s, when the crickets of a thousand back yards gave way to the pounding 4/4 beat of Donna Summer and Gloria Gaynor." (Bo Emerson, The Atlanta Journal-Constitution)

"Baroque and beautiful, celebratory and tragic, Martin Padgett has written a deeply-researched and profoundly-important dispatch from a hinge moment in the history of the American South, when a man named Hot Chocolate danced with a man named R.C. Cola, dressed in a 'cluster of grapes and not much more,' and Atlanta emerged as a citadel of drag and a beacon of possibilities." (John T Edge, author of The Potlikker Papers)

For a community whose history is often ignored or lost this was great to have. As a native Atlantan who grew up just behind the times that are covered in this book - it was wonderful to hear the tales of those who paved the way for so many of us