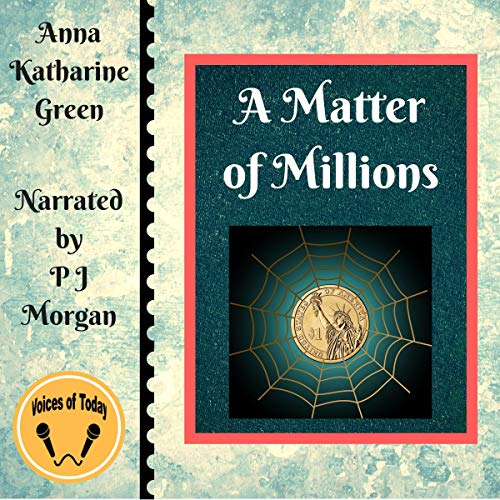 A Matter of Millions

Anna Katharine Green, the "mother of the detective novel", was a prolific American author who wrote well-plotted, legally accurate tales. The sixth installment in the Mr. Gryce series, this is a stand-alone mystery concerning a series of mistaken identities and one very large sum of money.

Several girls, all bearing the name "Jenny Rogers", are being killed in the city of New York. In the middle of it, there are two suspects: a famous painter and a visiting stranger, who also happen to bear, in their turn, identical names. Behind it all, the dying wishes of a man and a nefarious plot to lay claim to a matter of millions.

I really enjoyed this book. The synopsis of several women, with the same name, being murdered grabbed my attention.

Once I started listening, I felt the writing seemed a little old school. So I decided to investigate. Turns out A Matter of Millions is from the Victorian Era. I love reading Victorian novels. Added to that, I found out Anna Katherine Green is pretty much the grandmother of the modern mystery, (if Agatha Christie is the mother of the modern mystery.) With Green, like Christie, you have to pay close attention to the story, and even after doing so, it ends with a plot twist you did not see coming, even for a seasoned mystery reader.

I thoroughly enjoyed this story. I cannot wait to share it with others, especially my friends who also love Victorian novels. I have never seen Anna Katherine Green's name come up.

P.J. Morgan does a nice job with the narration and kept me listening straight through to the end.

I received a copy of this book at my request, and I have voluntarily left this review.

A Matter of Millions

This book was good,as long as you could keep track of what was going on.Girls with the name Jenny Rogers are being 'found' and some die,some don't.It's a twisted tale. Narrated nicely by P.J. Morgan.I was given this book by the narrator,author or publisher free for an honest review.

The description was the first thing that had me hooked, but when I listened to it it did not grab me as I wanted to. This is more due to how the book is written than anything. However, I did find it intriguing and I liked the surprise towards the end. I enjoyed it more then I expected.

I was hooked by the idea of this book and only found out after listening to it that it’s actually a classic from the 1800’s. Writing style wise, this much is apparent, but I have to say that the action and suspense had me on the edge of my seat like something Ruth Ware would’ve written.

I didn’t see the ending coming, and that rarely happens for me in thrillers anymore. Even though it was a little wordy, I still very much enjoyed the story. Plus, the smooth narration made it an easy listen.

I thoroughly enjoyed the narration of this book. Its about a man on his deathbed that wants to leave a woman with certain requisites 3 million dollars since he has no relatives that are alive. He wants to leave this money to someone that reminds him of a woman he loved earlier but her life was cut short.

In the end I did not see what had actually happened coming at all. I will be listening to this one a second time for sure! I was given this free review copy audiobook at my request and have voluntarily left this review.

Proves the Value of Audio Books

A Matter of Millions. This is a"classic" from around 1890's, and as such it is written in the style of the time - dare I say a little wordy. I would never have read this book - but as an audio book I gave it a try and surprisingly enjoyed it. Just proves the value of an audio book to expand your genres.
It is a mystery/romance as was popular at the time.
Anna Katherine Green was a top class author of her time , and deserves a modern audience.
Try this audio book I think you'll enjoy it I did.
I was given a free copy of this audiobook at my own request, and voluntarily leave this review.