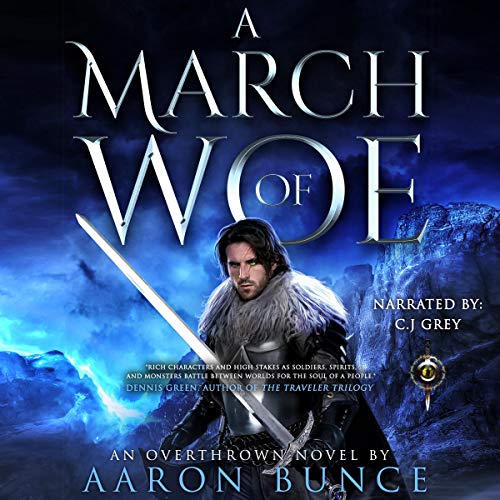 A March of Woe (A Grimdark Epic)

A March of Woe (A Grimdark Epic)

Ban Turin, the heavily fortified and cosmopolitan capital of Denoril, has gone dark, its massive gates closed for the first time in an age. Only two people know why: A denil monk and his unlikely savior, a freed prostitute named Aida. They make a desperate March south, fighting the harsh winter to deliver a message of Woe - a message that lord Thatcher, the Earl of the lakes, will likely struggle to believe. The Nymradic, an ancient and powerful race, has returned, aided by none other than Djaron Algast, Denoril’s overthrown king.

Roman and Dennah flee north in search of sanctuary, but to where? The lord Constable poisoned Roman and tried to silence Dennah to bury the secret of his lineage. Meanwhile, an unknown menace prowls Bardstown. Roman must embrace his true potential, or he and Dennah will freeze to death in the wild.

Julian has finally broken free and runs towards Craymore, desperate to save Tanea. And yet, the truth of their divine connection exposes a deeper, far more complicated conflict then ever believed possible.

Safe havens are disappearing, contracting, and driving our heroes towards the heartland and the lakes of Karnell, where they may find more than just sanctuary.