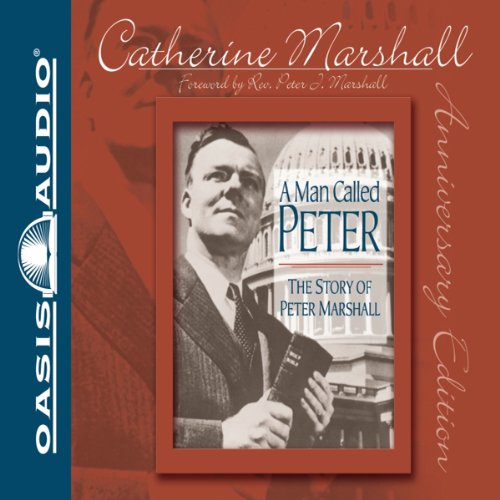 Filled with humor, wisdom and loving detail, the powerful story of Peter Marshall's life has touched the hearts and minds of millions of people. It's a story about love - the love between a dynamic man and his God, and the tender love between a man and the woman he married. It is also the gripping adventure of a poor Scottish immigrant who became chaplain of the United States Senate and one of the most revered men in America.

A Man Called Peter became the number-one best-seller when it was published in 1951, and around the world lives were changed by reading of the chaplain's remarkable faith.

In the foreword to this audiobook, Peter's son writes, "Even when [Dad's] words were preached 'secondhand'. . . in the movie version of A Man Called Peter, they had an amazing effect on people." Through Peter's story and the compelling sermons and prayers included in A Man Called Peter, you will discover insight into God, man, and life on earth and hereafter. You will also be encouraged by the realization that "if God can do so much for a man called Peter, he can do as much for you."

Would you try another book from Catherine Marshall and/or Renee Ertl?

Catherine Marshall was a gifted author. The story is extraordinary and inspirational. I have found it most uplifting. The narration by Renee Ertl, however, is sadly lacking. She has a pleasant voice, but mispronounces many words and has a halting, stilted style of reading. She constantly misinterprets phrases, putting odd emphasis and pauses where they don't belong. It interferes with the listening experience, causing you to focus on her style instead of this great biography of an exceptional man. You are constantly aware that she is reading, and not very well. It's a lot like an elementary school student struggling to read poetry without inflicting it with an unnatural sing-song. Too bad. I'll never get another audio book performed by her. Doesn't anyone listen to these things before they are released for distribution?

Though he died before I was born, I have been inspired for decades by both the book and the movie biographies of Peter Marshall. The story will inspire anyone who is interested in learning what one person can do when they are truly committed to doing what God wants from them. Both Peter Marshall and his wife, Catherine, the book's author, touched thousands of people in countless ways throughout their lives and continue to do so years after their deaths.

I'm giving 5 stars overall because the Marshalls' story is so valuable, but two cautions are in order. Naturally, the story written in 1951 is dated in many ways, from Peter Marshall's strong views about women's roles, to Catherine's omission of the formidable then-Senator Margaret Chase Smith in referring repeatedly to the senators collectively as "men," to then-contemporaneous ethnic terms. If understood for its time and place, though, it is still extremely powerful. Book, movie, and audio book are all effective, though of course the movie offers fewer details and takes a little dramatic license. Modern purchasers who can ignore these flaws in favor of the deeper spiritual value will find the story enjoyable and inspiring.

A strong caution is in order about the audio book. The reader has a pleasant enough voice and style, but for those who are attentive to grammar and diction, frankly she's woeful.

She mangles many words, either by placing the emphasis on the wrong syllable (perSONage, dispenSARy, imPOtently) or by simply garbling the pronunciation (diagnotician for diagnostician, thombrosis for thrombosis). She emphasizes the wrong word in the sentence for the context. She doesn't try very hard to use a Scottish accent, but it would be better if she didn't try at all than to fail so utterly, such as pronouncing "guid" as "guide." It's inexcusable (especially in a book about a proud Scot!) to pronounce important locations like Culloden as CULL-uh-dun, Loch Lomond as Lock LoMOND (as if it were in France, instead of Scotland!), and Edinburgh as EdinBURG.

I love the story enough to go on listening despite thinking repeatedly that the publisher should be downright ashamed to release a work with so many narration errors. If this would ruin it for you, read the print edition instead and/or see the wonderful movie. May it inspire you, as it does me, to follow God as committedly as the Marshalls did.

Where are the sermons?

I am not especially religious, but I first read this book as a teenager 50 years ago, and some of this man's words have stayed with me for half a century. Most of them are in the sermons at the end of the book. In this revised edition there is a long, boring introduction by Peter John Marshall (their son) in which he states that he replaced one of the sermons his mother selected with one of his own favorites. Again, where are the sermons? This book is NOT unabridged. I agree with other reviewers that the reader is awful, but surely a good narrator (preferable male because Marshall was male) could have been found to read the sermons of this man.

What would have made A Man Called Peter better?

It should have been written by a non-involved 3rd party.

What could Catherine Marshall have done to make this a more enjoyable book for you?

She is his wife, but she sounded too proud of him and herself.

This book had no pizazz. Boring.

I loved her book Christy but found myself very disappointed in this.

This book is supposed to be about a man full of faith. He was, but this is a boring book.

Very well written and narrated. It gave a front row seat to what life and culture was like in the early 30s and 40s before AC and email. Peter's and Catherine Marshall's life continues to point others to Christ. The book left me wanting to do the same. I highly recommend picking up a copy of The Prayers of Peter Marshall as well.

I love Peter & Catherine Marshall's witness to the glory of Jesus Christ.
The narrator's voice was the correct timber for the character of the bright young woman recalling her husband, but that's all that qualifies her.
Her inability to pronounce words, to understand sentence structure, made the listening experience so painful, I wanted to cry.

Makes you wish you could have met Dr. Peter Marsha

Although the narrator should have been taught the correct pronunciation of cities in Scotland, the book was very well written and left me wishing I could have met & heard Dr. Marshall. We need someone like him today.

Learning about the Marshalls

A Man Called Peter will keep you wanting more