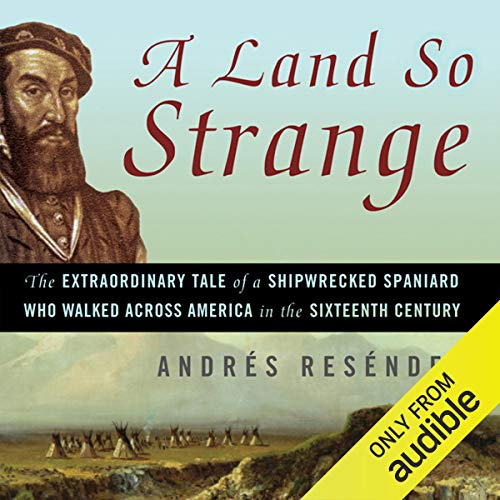 A Land So Strange

In 1528, a mission set out from Spain to colonize Florida. But the expedition went horribly wrong: Delayed by a hurricane, knocked off course by a colossal error of navigation, and ultimately doomed by a disastrous decision to separate the men from their ships, the mission quickly became a desperate journey of survival.

Of the 300 men who had embarked on the journey, only four survived - three Spaniards and an African slave. This tiny band endured a horrific march through Florida, a harrowing raft passage across the Louisiana coast, and years of enslavement in the American Southwest. They journeyed for almost 10 years in search of the Pacific Ocean that would guide them home, and they were forever changed by their experience. The men lived with a variety of nomadic Indians and learned several indigenous languages. They saw lands, peoples, plants, and animals that no outsider had ever seen before.

In this enthralling tale of four castaways wandering in an unknown land, Andres Resndez brings to life the vast, dynamic world of North America just a few years before European settlers would transform it forever.

"Told from an intriguing and original perspective, Reséndez's narrative is a marvelous addition to the corpus of survival and adventure literature." ( Publishers Weekly)
"A must-read for anyone interested in the early history of European exploration in North America—or in real-life adventure, compellingly told." ( Bookmarks)

Would you listen to A Land So Strange again? Why?

Yes, if only to re-read the opening chapters with full knowledge of where the characters they introduce were going to end up. Resendez starts off with plenty of history, of the Spanish colonization project, the backgrounds of the principal figures in the narrative and their relations with the Spanish court and colonial administrators, and it's a lot to assimilate. But it's absolutely critical background for understanding what Cabeza de Vaca's shipmates thought their mission was in the New World, and why they made the mistakes they did.

Davis is one of the best narrators of nonfiction I've heard on audiobook. His pacing and intonation are consistently spot on. His pronunciation of Spanish is also of near-native quality. (This does mean that an English speaker may not always catch a name on first hearing; but that's a small price to pay for a narrator capable of being so faithful to his material.)

Cabeza de Vaca's narrative is many things: an epic story of survival, a harrowing tragedy, a lesson in the folly and hubris of the Spanish conquistadores, a rare source of evidence about the lives of numerous Native peoples just before their lives were changed forever by European expansion. If you've read his own telling of it, you know that there are, for the modern reader, lots of puzzling gaps and unanswered questions. Resendez's project is to fill in those gaps and answer as many of the questions as he can while retelling chronologically the story of the Narváez expedition. He's good on the Native American background and especially good on the Spanish background—at moments you feel like you're actually present at the court of Charles I or dockside in Seville watching the colonists' ships being loaded. The result is a story that's gripping enough for someone encountering it for the first time, but informative enough to satisfy someone who knows it well.

(For what it's worth, the publisher's summary is a bit inaccurate. Only four men survived until the end of the tale, but many of the original 300 made it as far as Texas. The four survivors weren't originally trying to get to the Pacific—as we learn, that was a shift in destination made very late in their story.)

I was first introduced to this story in Tony Horwitz's book "A Journey Long And Strange". (A fantastic book, by the way). In that book, this tale took up about one chapter, but I found it to be really compelling, so when I saw there was a whole book about it, I had to check it out.

It's a cool book. A little short for my taste, but quality material all the way through. If you prefer books under 10 hours, this one is excellent. It's such an fascinating story that it's hard to complain too much about it, although it may have been better off as a short story in a collection of two or three short stories. The scant evidence that Mr Resendez had to work with is kind of apparent. As short as it is, it still feels like he had to milk every last drop out of the material he had to work with. Still, I had it on my headphones all day without switching to anything else, and I think most history buffs will have a hard time putting it down.

Oh yeah, and Jonathan Davis is surprisingly good. This was the first book I heard him read, and I'm currently listening to him read a book on the civil war. He's the definition of a reader you forget is there. He's so perfectly clear and understandable that his voice never distracts from the text.

Does what you want

An excellent, efficient telling of the story of Cabeza de Vaca. I wished it could have been longer, but the author is probably already stretching the sparse evidence as far as it will go.

The narrator is very listenable, and makes a good effort at pronouncing the Spanish names.

What did you love best about A Land So Strange?

A well told extraordinary story I had never heard before. Includes a lot of context about the age of the conquistadores that helps set the scene for the incredible journey. I enjoyed the factual accounting combined with speculation about what various stages of the trip must have been like. The gaps are filled in without making up a new dialogue.

Why can not history be taught like this? Through the means of an amazing tale we learn about Spanish colonization, navigation, clashes of empires and how our beliefs (religious or otherwise) affect the way we view and interact with different cultures.

As other reviewers note, Resendez is working with very little documentation and a lot of hearsay and supposition. Only rarely does he push my buttons and jump to unwarranted conclusions: does he really think it is just a likely that these men performed miracles as that the placebo effect or regression to the mean explains the "healings"? The story is rather thin and even a short book like this one is padded in spots with unnecessary background information, but it is worth it to hear this little-known story.

I believe this is my first listen to Jonathan Davis and I was very pleased with his pronunciation of Spanish names and places. Too often it seems narrators do not take the trouble to learn the appropriate pronunciation.

Nothing to do with the recording, but I wonder why the cover of the book says "An extraordinary tale of a shipwrecked Spaniard who walked across America" although the book tells the tale of four men - three Spaniards and a black slave and it was not really a shipwreck as we think of one.

This is a wonderful book that truly takes you along the long and perilous journey of Cabeza de Vaca. Both the author and the narrator do a wonderful job breathing life into this story. The narrator is especially talented and flawlessly reads the Spanish names and terminology. Listening to the story is a bit exhausting, as they capture the desperate situation of the explorers in great detail. Think of it as a non-fictional Robinson Crusoe. I'd recommend this to anyone interested in history, exploration, or adventure in general.

What did you love best about A Land So Strange?

The story of Cabeza de Vaca's journey is utterly fascinating.

My only complaint is that so many chapters were devoted to the court politics of the Spanish empire, which don't interest me at all. I was looking for a story about Cabeza de Vaca's travels, so I was itching to proceed with the voyage. Resendez took a long time to finally get us onto the ships.

This Guy Did Some Serious Walking

Great quick read about a tale that is missed in most History classes. Its about a Spanish expedition gone wrong.

One aspect I found interesting was the discussion on 16th century ocean navigation. Another was the following these castaways go from noblemen, to survivalist, to slaves, and then on to become demigods in the eyes of the native Americans. I appreciated how the author could go back so many years and still capture the spiritual transformation of the castaways.

Some might argue that this is a story of survival, heroism, and success. There are these elements, but there are also tragic and thought provoking elements. This book made me consider the price of greed, the mysteries of spiritualism, and what it means to be civilized.

It was a very cool story. Learned a bunch about the history of the continent.

Assigned in college to read

Like anyone, or maybe just me, but when you have a book assigned to read for class it drastically removes a desire to even want to open it, let alone read. Thank you audible for having this book because while I was cleaning I got to listen to it and I truly had a journey unfold in my mind. This should be made a movie. Throughly enjoyed it.