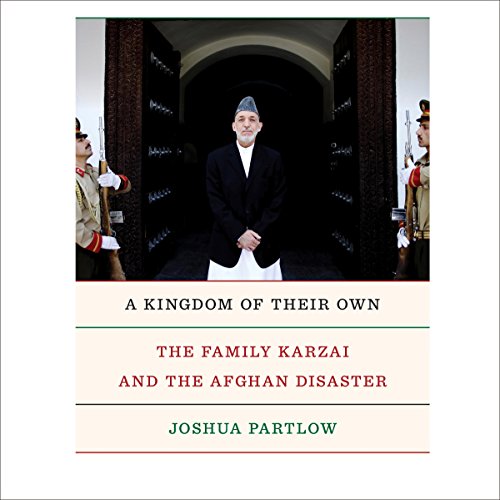 A Kingdom of Their Own

The key to understanding the calamitous Afghan war is the complex, ultimately failed relationship between the powerful, duplicitous Karzai family and the United States, brilliantly portrayed here by the former Kabul bureau chief for The Washington Post.

The United States went to Afghanistan on a simple mission: avenge the September 11 attacks and drive the Taliban from power. This took less than two months. Over the course of the next decade, the ensuing fight for power and money - supplied to one of the poorest nations on earth, in ever-greater amounts - left the region even more dangerous than before the first troops arrived.

At the center of this story is the Karzai family. President Hamid Karzai and his brothers began the war as symbols of a new Afghanistan: moderate, educated, fluent in the cultures of East and West, and the antithesis of the brutish and backward Taliban regime. The siblings, from a prominent political family close to Afghanistan's former king, had been thrust into exile by the Soviet war. While Hamid Karzai lived in Pakistan and worked with the resistance, others moved to the United States, finding work as waiters and managers before opening their own restaurants. After September 11, the brothers returned home to help rebuild Afghanistan and reshape their homeland with ambitious plans. Today, with the country in shambles, they are in open conflict with one another and their Western allies.

Joshua Partlow's clear-eyed analysis reveals the mistakes, squandered hopes, and wasted chances behind the scenes of a would-be political dynasty. Nothing illustrates the arc of the war and America's relationship with Afghanistan - from optimism to despair, friendship to enmity - as neatly as the story of the Karzai family, told here in its entirety for the first time.

"Nuanced.... American military and political arrogance butts up against deep-rooted cultural customs and family networks throughout this excellent account of a vastly difficult topic." ( Publishers Weekly)
"Partlow provides an insightful, revealing dissection of the failures of the US government in Afghanistan.... Partlow's character portraits are masterful.... An excellent introduction to the Karzai family and to the disastrous consequences of the Americans' inadequate understanding of Afghan culture." ( Kirkus Reviews)
"A strong assessment of Karzai's government and an important contribution to any well-rounded collection on contemporary Middle Eastern politics and society." ( Library Journal)

Ce que les auditeurs disent de A Kingdom of Their Own

MUCH MORE THAN A "KARZAI STORY"

this outstanding, insightful, and detailed account it's much more than the story of the Karzai family, It is the story of Afghanistan itself since the US invasion. I have read over 60 books on Afghanistan and, this rakes as one of the best. It gave me insights beneath the veil into the inner workings in personalities behind major events and decisions in that country. Highly recommended, I will read it a second time.

The book explains well key players to the Afghani war and why the war was a failure. From the reasons it failed to why we stayed. Great listen even with the long length.

As someone who spent a great deal of time working with Afghan reconstruction I found this book to be shockingly true and insightful to the nature of Afghanistan while also far more illuminating than I thought possible, given my previous experience. I would recommend this as a sort of modern day "Ugly American".

Well worth the listen

This book is very interesting. The author tells a compelling story of the Karzai family, and their struggles with America post 9/11.

This is a great account of the intricacies of global politics, and most of all, the over arching story of the mess in Afghanistan beginning even before 9/11. This was a interesting book for anyone interested in a new perspective of the Afghan war from the perspective of the family and their relations to the US. Really enjoyed it!! A true testament to the adage, fact is stranger than fiction.