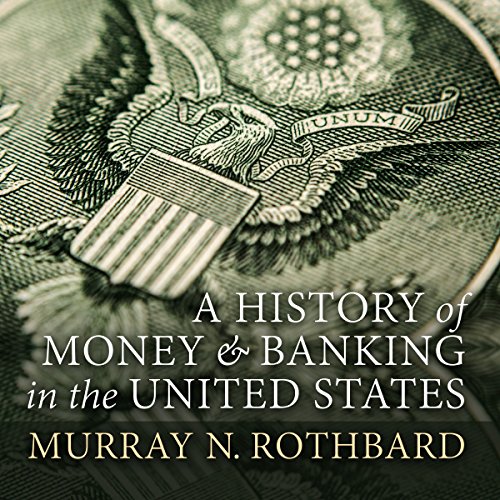 A History of Money and Banking in the United States: The Colonial Era to World War II

In what is sure to become the standard account, Rothbard traces inflations, banking panics, and money meltdowns from the colonial period through the mid-20th century to show how government's systematic war on sound money is the hidden force behind nearly all major economic calamities in American history.

Never has the story of money and banking been told with such rhetorical power and theoretical vigor. You will treasure this volume.

From the introduction by Joseph Salerno:

"Rothbard employs the Misesian approach to economic history consistently and dazzlingly throughout the volume to unravel the causes and consequences of events and institutions ranging over the course of US monetary history, from the colonial times through the New Deal era. One of the important benefits of Rothbard's unique approach is that it naturally leads to an account of the development of the US monetary system in terms of a compelling narrative linking human motives and plans that oftentimes are hidden and devious, leading to outcomes that sometimes are tragic. And one will learn much more about monetary history from reading this exciting story than from poring over reams of statistical analysis. Although its five parts were written separately, this volume presents a relatively integrated narrative, with very little overlap, that sweeps across 300 years of US monetary history."

Ce que les auditeurs disent de A History of Money and Banking in the United States: The Colonial Era to World War II

A lot to take in.

I like the way Rothbard relays the facts. He distinguishes clearly between his analysis and the actual history of money and banking. This book changes my view of the history in general.
About the narration: Very well enunciated at a comfortable speed, given the complexity of the subject. Minor issues with word stress; stressing correct words among groups of words.

should be a part of everyone's collection

As one of several histories of this topic I have read, I find this indispensable. It is lucid, and has the fortitude to lay out its arguments straightforwardly though many are (bravely enough) contrarian to conventional histories. Well and good. However, and I always find this bizarre in an author of this obvious intellect and discipline, the facts are cherry-picked and the characters one-dimensional in service of the author's ideology. (I repeatedly think of Nassim Taleb's references to the Bed of Procrustes -- hacking off the head and feet of any inconvenient facts to fit the intended conclusions.) This, for me, does not make me flee this book, as I have said it is a very informative work. It simply necessitates reading other histories. Alexander Hamilton's achievements are barely noticed and glossed over. Andrew Jackson was a good guy, period, no exceptions, who knew precisely what he was doing all down the line, and when his opponents opened the money spigots and he slammed the brakes, the ensuing multi-year depression was all his opponents' fault. His characters are often one-dimensional in this way: all good or all bad. Jay Cooke was bad. Period. And, facts are oddly detached from their surroundings, which can be glaring if one is versed in the surrounding history and has thought much about it. If one is a hard-money banking purist, knee-jerk style, perhaps living in a libertarian basement, the arguments may make perfect, almost algebraic sense. To me, reality and its players and patterns and meanings are NEVER that neat. That's why movies are not mistaken for reality, and many books deserve this sort of scrutiny. They are reductive. However, nations have tough choices to make and things to do, little things like a Civil War to finance, and its aftermath. Frankly, that Civil War, funded with help from such evil fellows as Cooke, helped develop the global military power needed in the 20th century that, thank God, I was born and sheltered in. I live in a prosperous country that is on top of the world, relative to others, and is the backbone of a world order, so I have a hard time buying the counter-factual of how wonderful everything would be if we had clung quasi-religiously to hard money zealotry, along this rigid line. Frankly, I think we would be road-kill for some better organized nation's military, had we gone that decentralized route. And guess what: a lot of resources were wasted getting here. Nit-picking this process as if one had a better counter-history to offer is presumptuous. This is the kind of trap many of my most intelligent friends fall into (and sometimes, sadly, leaders of the USA, not to mention the voters following their fairy tales) -- they can get into such elaborate self-deluded architectures of aggrieved fantasy that they lose sight of simple virtues and victories right in front of them, in a messy world where unintended consequences, missteps and waste befall all paths. This to me is merely another form of spoiled "entitlement" I, unsurprisingly, usually hear such self-deluders prating about. Nevertheless, these provisos aside, I urge anyone with an interest in this topic to give this book a good listening. You will be well served. For example, the account of the Suffolk Bank, in effect a private clearing and central bank, and a very effective one, points to creative ways finance may evolve, going forward, in private hands (and perhaps with new networking technologies). And that sort of thing is a big attraction of history reading for me. Lots of things have been tried before, brilliantly, but may need a diligent historian like this to pull them out. I'm very satisfied with this book. Growing my intellect means listening carefully and patiently to authors whose ideas I did not, at the start of the book, hold. That's a main reason to read any book, I reckon: to stretch my mind.

A bit puzzling at times

One might question why the House of Morgan seemed so divided at times. Or why credit is bot different to money aka legal tender.

I think this book was written for people who already have some understanding of economics. as a novice, I did not understand many of the concepts that were used. it is a scholarly work and almost a text book used in an economics class. I really need an introductory book into understanding money and economies. I have no doubt this author is well versed, indeed an expert, in economics. it is no doubt a valuable book for people in the field. none the less, I will no doubt use this book in the future.

narrator unsuited for reading audiobooks. narration is hard to tolerate despite good content. stay away from this version.

Very detailed look at monetary policy leading up to the Fed's takeover of the money supply, highly recommend.

If you want to know why things are the way they are with our economy & government then you need to listen to this book. As the saying goes, there is nothing new under the sun.

While an excellent and by all account accurate telling of what it says on the title, Rothbard offers his signature , Libertarian perspective. His revelations and observations about the means and motives behind historic events is at times repetitive, but often intriguing. The tone is pointed and blunt, but hardly lacking in academic terminology