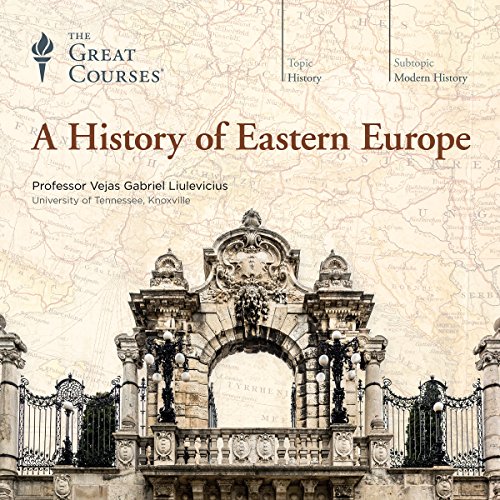 A History of Eastern Europe

Eastern Europe has long been thought of as the "Other Europe", a region rife with political upheaval, shifting national borders, an astonishing variety of ethnic diversity, and relative isolation from the centers of power in the West. It has also been, and continues to be, pivotal in the course of world events. A History of Eastern Europe offers a sweeping 1,000-year tour with a particular focus on the region's modern history. In 24 insightful lectures, you'll observe waves of migration and invasion, watch empires rise and fall, witness wars and their deadly consequences - and come away with comprehensive knowledge of one of the world's most fascinating places.

In examining this region's remarkable diversity and contested borders, you'll better understand the ever-present tension between the connections between East and West and the areas of marked contrast. These disparities were clear as the world globalized and the US and Soviet superpowers jockeyed for spheres of influence - epitomized by the imposition of the Iron Curtain across Europe and the rise of the Berlin Wall. And yet, throughout the 20th century and into current times, the connectedness of Eastern Europe to the rest of the world continues to be demonstrated beyond question. This region has made itself felt across the globe through:

Explore the grand sweep of this epic history, from a series of early invasions to the rise of empires to the collapse of communism and into the new challenges of the 21st century. Meet brilliant poets, writers, artists, and other cultural figures who made an impact on Eastern European history.

Very frustrating that this was billed as a "sweeping 1,000-year tour" when the focus was entirely on the past century. Lecturer was excellent, however.

A fascinating tour through a rich and complex history

Professor Liulevicius is an international treasure and I am grateful that The Great Courses is able to bring him to me on my iPhone. His courses on espionage and on history's greatest voyages of exploration are among my favorite titles on Audible.

BUT Eastern Europe is his specialty, and so I was really looking forward to this series. I wasn't disappointed. In fact, I learned surprising things about my own heritage.

I will admit there were moments when I wished I was watching the video version. I've seen bits of it, and the maps illustrating the constantly changing borders of Eastern Europe are very helpful; but if you know the geography, or if you are able to look up a map to glance at while listening (as I did), then you'll be more than satisfied with this rich and nuanced tour of a fascinating part of the world.

Just dissapointed that the lectures moved so quickly to WWI and WWII. Glazed over a myriad amount of history so they could talk in depth about 20th century history. Which just plays to audiences not really interested in eastern european history but, how eatern europe relates to western europe and american audiences....just dissapoimted but, execution was excellent.

Not A Very Serious History

This is a very poor history of Eastern Europe in that while it talks a lot about cultures and national stories and consciousnesses, it does little to explain why the major events in Eastern Europe's history happened. There is no economic analysis whatsoever, and so while the listener comes away knowing which poets came from which regions et cetera, the listener does not understand how Eastern Europeans actually lived, and how their livelihoods transformed over the centuries. It does not talk about the Industrial Revolution, or the Emancipation of the Serfs in Russia, or anything of the sort. It talks a lot about the rise of nationalism without saying anything about which economic groups and classes fought for nationalism. I understand that there is limited time to lecture, but not even a cursory explanation was given. Without addressing things like these, even if the listener picks up certain facts about Eastern European history, the listener does not come away with any better understanding of why these things happened.

Very few sources give an in depth but understandable telling of Eastern Europe. For many and me included, Eastern Europe fell into the age old stereotype of backlands. I now know the area as a vibrant and history rich area, even more history than you can really point at Western Europe in many cases. Fierce resistance, solid self determination. This audio book is a must read if you enjoy history and learning.

Excellent Overview of the Region

What did you love best about A History of Eastern Europe?

What other book might you compare A History of Eastern Europe to and why?

Prof. Liulevicius' lectures on the history of espionage and covert operations uses a similar style and is similarly well-conceived and delivered.

What about Professor Vejas Gabriel Liulevicius, PhD’s performance did you like?

Efficient delivery with a personable style, and effective use of both solemnity and humor.

I am planning to visit several Eastern Europe countries this spring and found this very interesting and informative. Having my paternal grandparents come from this area made understand there desire to come to America. Though there life was full
Of hard work here there was more peace and freedom here then they would have in there own countries.

Would recommend this lecture series

A most enjoyable journey through the histories of countries Americans rarely focus on! This was well worth it and narration was top notch!

Of Lithuanian and Ukrainian Descent it occurs to me that i wish I had this as a kid. In my recent DNA Testing I got Eastern European, Balkans and Italian (Maternal Grandfather). Much of the turmoil in my view was created by the west. So Genetically I have Relatives in Lithuania, Ukraine, Belarus, Russia, Hungary, Italy,Russian... Eastern European

What was one of the most memorable moments of A History of Eastern Europe?

the history on the polish-lithuanian commonwealth.

The hope in the closing of the lecture series

A must read of anyone with Eastern European Descent

History You Cannot Do Without

Would you consider the audio edition of A History of Eastern Europe to be better than the print version?

The audio version served my purpose, and that was to learn about Eastern European history as we drove on our holiday trip for ten hours at a time. I was mesmerized with the content and the presentation.

The sheer scope of Eastern European history is almost impossible to grasp, and only a series of lectures like this can get even a small part of the story across. It is no surprise that Eastern Europeans have different outlooks from those in the West. This series is a great start in putting the background of the current happenings in Eastern Europe and Russia into a current day perspective. The Ukranians, Poles, Czechs, and others have all been there before, multiple times. From Stalin, to Hitler, to Milosevic and other butchers, times have changed, but the memories linger. Is Putin then next international mass murderer?

Although you are not 100% interested in all the topics of his lectures (I have chosen some lectures because of him) you'll get entirely absorbed enjoying spellbinding hours. All his lectures are highly recommended.

People who grow up in western Europe (like me) often do not know much about Eastern Europe. Often, people (including me) are not even aware of this lack of knowledge and understanding. This is a pity as this lecture series shows. The listener learns about the history of Poland, the Balkans, Ukraine, Jewish life in the east (among other things) and understands so much more about history, about religion, and politics and how a European identity must include the Eastern perspective just as much as the Western perspective. The teacher is great to listen to and explains the issues very well. I can only encourage as many listeners as possible to fill their gaps of knowledge with a new understanding for the Eastern part of Europe.

Must read for all English speakers interested in Eastern Europe.

Excellent lecture series on the history of Eastern Europe. Read by the author himself, the series offers a well-balanced combination of analysis, lighter narrative (including brilliantly curated jokes typical of a the country and era they originate from) and an insider’s views on the region’s cultural landmarks.