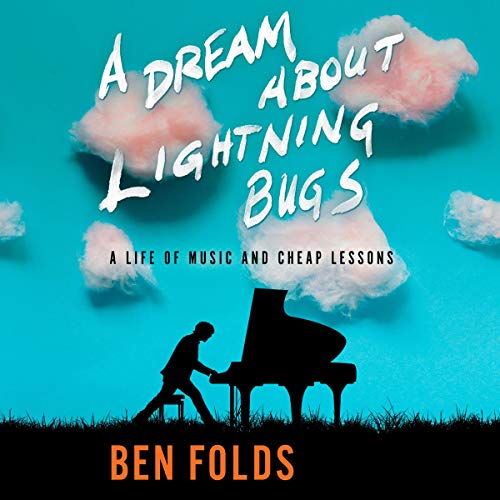 A Dream About Lightning Bugs

A Dream About Lightning Bugs

New York Times best seller • From the genre-defying icon Ben Folds comes a memoir that is as nuanced, witty, and relatable as his cult-classic songs.

"A Dream About Lightning Bugs reads like its author: intelligent, curious, unapologetically punk, and funny as hell." (Sara Bareilles)

Ben Folds is a celebrated American singer-songwriter, beloved for songs such as "Brick", "You Don’t Know Me", "Rockin’ the Suburbs", and "The Luckiest", and is the former frontman of the alternative rock band Ben Folds Five. But Folds will be the first to tell you he’s an unconventional icon, more normcore than hardcore. Now, in his first book, Folds looks back at his life so far in a charming and wise chronicle of his artistic coming of age, infused with the wry observations of a natural storyteller.

In the title chapter, "A Dream About Lightning Bugs", Folds recalls his earliest childhood dream - and realizes how much it influenced his understanding of what it means to be an artist. In "Measure Twice, Cut Once", he learns to resist the urge to skip steps during the creative process. In "Hall Pass", he recounts his 1970s North Carolina working-class childhood, and in "Cheap Lessons", he returns to the painful life lessons he learned the hard way - but that luckily didn’t kill him.

In his inimitable voice, both relatable and thought-provoking, Folds digs deep into the life experiences that shaped him, imparting hard-earned wisdom about both art and life. Collectively, these stories embody the message Folds has been singing about for years: Smile like you’ve got nothing to prove, because it hurts to grow up, and life flies by in seconds.

Praise for A Dream About Lightning Bugs

"Besides being super talented, and an incredibly poignant and multifaceted musician, Ben Folds is a fantastic author. I couldn’t put this book down - and not just because I taped it to my hand. Ben takes us into his mind and into his process from the very beginnings of his childhood to where he is today - one of the greatest musicians and writers that has ever graced the art." (Bob Saget)

"A Dream About Lightning Bugs is an insightful, touching and often hilarious look back at [Folds’s] life and career, told with wit and good old-fashioned Southern warmth - like Truman Capote, but with more F-bombs." (People)

"A Dream About Lightning Bugs offers a glimpse inside the head of another musical genius while also being one of the best-written, most interesting musical memoirs of the rock era." (Pittsburgh Post-Gazette)

"A masterfully written memoir, and so much more. Folds imbues this literary work with keen insight and humor to create an elegant and moving tribute to art and life itself." (Daniel Levitin, author of number one New York Times best seller This Is Your Brain on Music and The Organized Mind)

exactly what I was hoping for and more

Ben Folds has been hands down my favorite since I first heard Ben Folds Five on a burned cassette. This was exactly what I was hoping it would be. Insightful, sincere, funny and full of moments that felt he was talking just to me.

only complaint:
totally missed the chance to title it A Hard Earned Peice of Mind but what the hell do I know.

Enjoyable listen, I didn’t want it to end!

Loved this audio book! I love Ben’s voice, and when I found out he narrated his book, I knew I’d be getting the audio version immediately. His narration is great - fun, funny, includes some music. I highly recommend, especially if you love his music, or even if you don’t (what’s wrong with you?).

The book itself is great, a very honest, personal reflection that is never boastful, always deeply honest and entertaining. I really enjoyed learning more about Ben. Like I said, I didn’t want it to end. My only complaint is that I’m sure Ben has more great stories and insights - so he should do a sequel!

Thank you Ben for this impressive work!

What's Been Good For the Music ...

If you're a Ben Folds fan, this book is a must. It's especially a must in audio, with Ben narrating his own story. You've heard much of this before in his stage shows. But here, they're complete, fully within context, and sometimes surprising -- for example, you've heard his story about throwing his drums into a lake when he flunked out of music school, but you may not have heard the full story about how he flunked. And you've heard Ben say that the opening lines to Army are true to life ("Well I thought about the army, Dad said, Son you [must be] high", to quote the clean radio edit), but now we learn that the next line ("Well I thought, yeah, there's a first for everything") means something quite different.

Even better, there are many stories that we never heard, and many connections to songs or maybe even just lines in songs, some of which may not have shown up for many years -- like the real life story behind the song "Don't Change Your Plans", which pre-dates the formation of Ben Folds Five, and includes some details that find their way into "Michael Praytor" nearly 20 years later.

And even better than that, whether he's talking about his life, his music, or his philosophy about art education, Ben's snarky humor comes through at every turn. I was smiling the entire time I was listening, which must have looked strange to people passing me on the street, and I frequently laughed out loud or repeated particularly good turns of phrase. The narration, like the writing, starts out a bit stilted over the first few chapters, but once Ben starts talking about his childhood, he finds his voice -- his writing voice and his narration -- and it's pure pleasure to listen to, as a fan.

Will non-fans be as rapturous as most fans are? It's hard to say, as a fan. I believe there is enough humor and enough about the creative process to interest anyone, especially if you've had success reading biographies about people you may not have necessarily been a fan of, as I have. On the other hand, if you're a fan of Ben solely because of The Sing-Off or his other connections to college a capella groups, you're in for a major disappointment.

In fact, that latter observation is part of my only serious quibble -- Ben really rushes through the last few years of his life, giving scant time to his more recent work (he never even mentions yMusic or how that collaboration came to be). Other fans have expressed disappointment that he doesn't face up with enough depth to some of his emotional ups and downs, but I feel that a big part of his story has been his inability to do exactly that, channeling his energy instead into his music -- so rather than lament its absence, go back and find it in the songs.

could not get enough of this read!

Ben Folds has lived a very interesting life. Throughout it all he seems to have maintained a brilliant outlook on Music Creation creativity and Artistry as a whole. that Outlook has culminated an incredibly inspiring autobiography

As both a longtime fan of Ben Folds and a musician myself I found this book wonderful on several levels. both in learning about the man himself and also his musical process. I feel very inspired after finishing it!

this book is phenomenal, whether you are a Ben Folds fan or not! What an interesting insight into the rigors of leading a musical life, or bust. I really appreciated the honesty, the humor, and a lot of great takeaways. I definitely recommend!

Great narration, funny as hell at times. A genuine exploration if his life in the music business, and the real life journey that got him there

If you’re a fan of Ben Folds, this was great!

Really enjoyed this, awesome to hear Ben’s story. It felt a little like sitting down and hearing it across the table which was really fun!

Highly recommend for anyone who is creative and chases their passions. It doesn’t hurt that I love Ben Folds and his music and I have followed his career since 2006.

I've been listening to Ben longer than I can remember. he has been a personal hero to me as his albums would somehow relate to what was happening in my life (at least how I applied it in my head). it was easy because his music and stories are real, relatable, and always entertaining. this was the first audio book I had listened to and I'm glad I did because it was like getting the story from the man himself. I purchased the book when it came out but my masters program kept me from my side reading. long drives to class made this audible possible. I highly recommend this book to anyone as it's not just for fans of his music, but for human beings in general. give it a go!