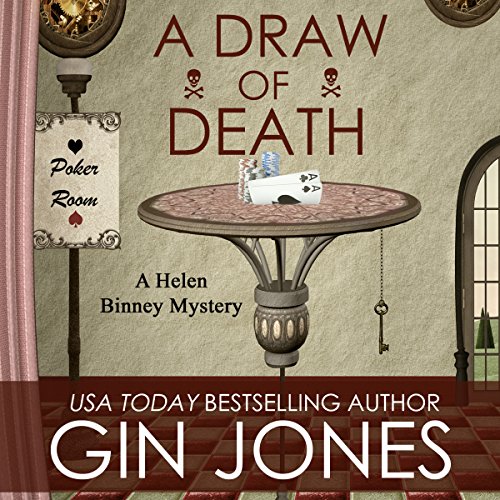 A Draw of Death

A Draw of Death

After 20 years as a political wife, the now-divorced Helen Binney should be able to organize a small event for the local library without breaking a sweat. But she didn't plan on the guest speaker, a controversial celebrity poker player, literally drawing a hand of death. Whose buttons did he push a little too hard? Was it really, as the police believe, the niece of Helen's handsome lawyer/friend, Tate? Getting to the truth would be a lot easier if it weren't for a cranky runaway cat, a group of poker players who put the "fanatic" in fan clubs, and death threats that may or may not be imaginary from an end-of-the-world cult. With the stakes so high, can Helen save Tate's niece without drawing death herself?

Helen Binney needed a new hobby. Solving murders was too dangerous. Only this time Tate’s niece was suspected as were the niece and nephew of her driver. If only Lupus fogged brain wasn’t making it hard. Recommend.

A case to stump Helen Binney?

In A Draw of Death by Gin Jones, Helen Binney has kept busy by volunteering for the library. She has started a new speaker program and is kicking it off with a big-name poker player who has just moved to Helen’s out-of-the-way town in Massachusetts. Vic Risendes has all sorts of crazy requirements, such as purple M&amp;Ms, as a speaker requirement. He has been driving the niece of Helen’s lawyer friend Tate crazy by constantly changing his mind about the design plans for the mansion he has built and for which Stevie is decorator. But when someone stands up to protest the promotion of gambling, Vic storms out of the library five minutes after arriving.

The next day Helen goes to Vic’s house to try to rearrange his speech for the library, but Vic’s staff are confused because sometime during the night their boss locked himself in the poker room and left out a note not to disturb him. It’s now mid-afternoon, and he hasn’t emerged yet. Just as Helen gets the idea to use the new cameras in the poker room to check if Vic is o.k., through the tablet they spot Tate’s niece, Stevie, discovering the body of a very dead and bloody Vic.

Realizing that Stevie is now the prime suspect and that she herself has twice now solved murders that the local police have been unable to deal with, Helen decides to inspect the issue for herself. She finds out that someone has tampered with the security system, so all the new equipment hasn’t helped. This case proves to be much more difficult than her prior two and Helen has doubts about her ability to solve this one.

One thing I really appreciate about this book is the depiction of Helen as a woman who struggles with the disease of lupus but keeps fighting to live as independently as possible. As someone with my own chronic illnesses, I could clearly identify with the situation of Helen and her challenges. Though I do not have any personal experience with lupus, I could connect to the challenges Helen faces. I appreciate the way Jones depicts chronic illness and the accompanying indignities that patients face. In this book, Helen’s lupus adds memory and issues thinking, known as lupus fog, clearly to her range of physical problems.

Lisa Valdini narrates the audio edition of the book, as she does for the first two books in the series. She has a gentle voice that acts as a dynamic storyteller. The Audible recording does have some slight background noise every now and then, but it was faint and didn’t bother me. I look forward to hearing more books in the series released on audio.

A Draw of Death is an enjoyable book. It’s not adventurous and dramatic, but it tells a good story. It uses the basis of a poker player who has used bluff and trickery his whole career as the key to how the book plays out. I give the book four stars.