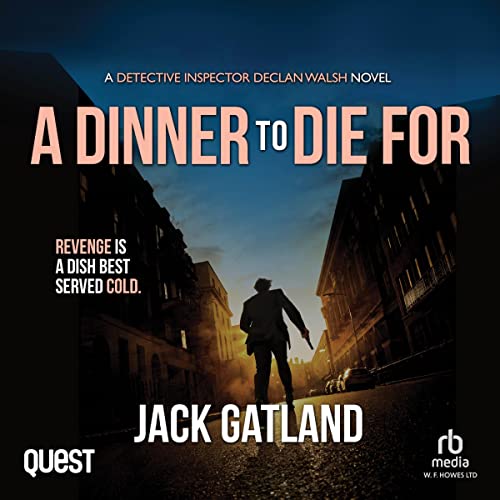 A Dinner to Die For

After a fatal poisoning in Essence, the Michelin-Starred restaurant of celebrity TV chef Leroy Daniels, DI Declan Walsh and the team of the Temple Inn 'Last Chance Saloon' Command Unit find themselves in the middle of a multi-sensory gastro war, following an investigation that takes them deep into the dark kitchens of London, and a group of friends-turned-enemies all vying to become the next breakout venue—no matter what it costs to get there.

But Declan and his team aren't working together this time; DCI Monroe and PC De'Geer are in Edinburgh, fighting for their lives while taking on a notorious Scottish Firm led by Lennie Wright, a man from Monroe's past with a vicious score to settle, while Declan is fighting for his career, constantly harassed by the secretive DC Ross over the mysterious disappearance and possible murder of Francine Pearce, with Declan still the prime suspect, while also visited by an escaped serial killer from his past with a score to settle.

And as the list of dead chefs increases, with unseen connections between Edinburgh murders and poisoned food critics coming to light revealing the true targets, Declan and his colleagues must finally come together to not only solve a series of impossible murders, but also stop the killer before they poison not only Charles Baker, the bookies' choice for new Prime Minister, and also the Queen herself at a State Dinner...

The eighth book in a series of procedural crime thrillers by #1 New York Times bestselling writer Tony Lee writing as Jack Gatland, A Dinner To Die For is perfect for fans of J.D Kirk, L.J Ross, Ian Rankin, Rachel McLean, Alex Smith, David Gatward and Ann Cleeves, among others.

Caught off Guard by this one!

A great listen though…and can’t wait to see what happens after the soul searching. I just hope it doesn’t end here! I really enjoy these characters, the cases, the pace of the storylines.
I’m very glad I found this series and stuck with it. Of course, having Robin Laing narration is a super plus too!

One of my favorite British crime series!

I really like this series. It has a great amount of humor , the characters are interesting, and the who dunnit's fairly clever if a little predictable. But I have got to hand it to the author on this one. The ending was so outrageous and the suspension of disbelief so high I actually burst out laughing!! Sometimes this type of thing would bother me and maybe put me off of an author but not this time. Definitely worth the credit and I can't wait for the rest of the series to get recorded. Hurry up Audible!!

Robin Laing is also a masterful reader and I love his range of voices.