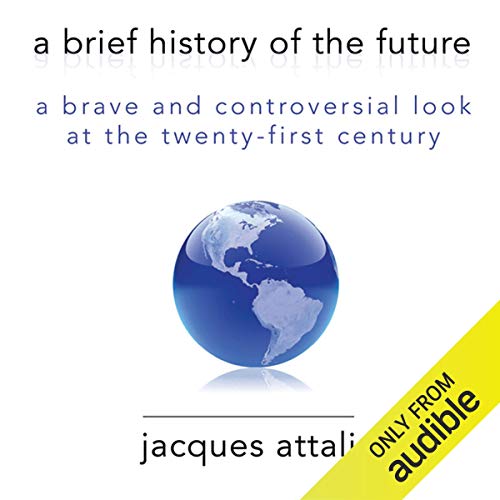 A Brief History of the Future

Jacques Attali, a French economist and former adviser to Francois Mitterand, lays out a chilling vision of our global future based on the paths taken by mankind throughout the course of history. In A Brief History of the Future, Attali argues that the progression toward individual freedoms has meant a greater focus on economic concerns rather than theological or militaristic ones which, in Attali's view, will lead to a dismantling of the nation-state. Alan Robertson has a gravelly voice that oddly manages to be soothing as well as unsettling as he details Attali's provocative vision of the impending world.

What will planet Earth be like in 20 years? At mid-century? In the year 2100? Prescient and convincing, this book is a must-read for anyone concerned about the future. Never has the world offered more promise for the future and been more fraught with dangers. In this powerful and sometimes terrifying work, Attali analyzes the past and pinpoints nine distinct periods of human history, each with its world center of power and prestige, and predicts what the tenth will bring by the end of this century.

Attali foresees the disappearance of individual countries and the dominance of a world government, with democracy prevailing. However, the ultimate, burning question is: Will we leave our children and grandchildren a world that is not only viable but better, or in this nuclear world bequeath to them a planet that will be a living hell? Either way, he warns, the time to act is now.

The author should have stopped writing when he got from the history lesson to predicting the future. this stuff is ridiculous, sounds like a 5 year old wrote it.

Worth your time if you are a student of the future

What made the experience of listening to A Brief History of the Future the most enjoyable?

Part 1 was somewhat of a mad romp through history, with the author's particular spin, and Part 2 extended, somewhat, the lessons extracted from Part 1. This is a worthy approach.

What aspect of Alan Robertson’s performance would you have changed?

The pacing was so slow I had to listen to the whole thing on 2X speed. That worked though.

Geography and associated geographic political power has always been important in providing the context in which ideas and industries have interacted in the past. This might prove, as the author suggests, to be a less important factor in the future, meaning that the story lines of 'future history' will not follow geographic political lines so much going forward. On the other hand, corporations, including insurance companies, are creatures of the geographic political power, and are likely never to rise to the level of, much less usurp wholesale in the way described in this audiobook, the powers invested in government. This is particularly true as the power of the rich (esp. corporations) to buy elections through marketing is weakened over time (as is all marketing efforts) due to the 'news noise' level of the internet. Couple this with the ability of anyone/everyone who is interested to get all of the sides of an issue rather than rely on 4th estate opinion leaders, and it will become more difficult over time for the few to dominate the many (at the moment the 2 party system in the USA is a key remaining factor in this domination).

But that is just my take... buy the book and think about the author's approach and the limitations thereof and you will benefit. No book about the future is easy or light or has any possibility of being 'right', but most books represent a point of view that will itself be a factor. This book included.

Interesting in many ways

But not necessarily a "guide". Concepts presented are very general, and since its writing some have come true, however many could see these events unfolding prior to its time. Nevertheless it was an interesting read.