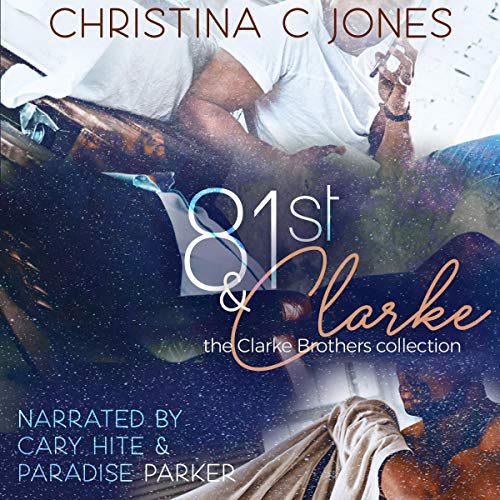 This is a compilation/collection of the three books in the series - there is no new material added.

Samara Holloway is back in Blackwood, after years away chasing showgirl dreams in Vegas. She’s on a new path now - different city, different career...but there’s nothing different about Addison Clarke.

Or so she’d love to think.

Enough time has passed that Addison is certain he’s ready to be exactly the man Samara needs.

If only she shared his certainty.

Andre Clarke is painfully accustomed to being in control. He’s the problem solver, the “responsible” brother, the one who keeps everything around him in order.

Until Drew Dawson steps in to turn him upside down.

Andre may be used to doling out commands, but Drew isn’t one to take them.

Two very different people with a shared goal...if only they can play their roles.

Kima Nolan has had enough of the Clarkes.

If they weren’t the only thing keeping her business alive, she wouldn’t deal with them at all.

Andre’s bite isn’t as severe as his bark.

But Aiden is so impossibly unruffled, so sure of his convictions...for Kima, it's probably best to avoid him at all costs.

There’s no telling what might happen if he gets too close.

I always get excited when CCJ releases an audible. She is an amazing writer that really kills it with her fun, sexy love stories. I have heard all of her books and this is the only one I couldn’t finish. The narration of this story is HORRIBLE! Like I couldn’t get through it. Narrators matter!! The story may have actually been good, I couldn’t tell. Again, the narrators ruined it.

As I’ve already read The Clark Brothers series, this review is strictly for the narrator’s performance. I’m really sad that I did not enjoy this audiobook as much as I expected to. The narrators were not a good fit for this book. I don’t understand why black authors tend to make bad choices when it comes to female narrators. Paradise Parker was horrible. She didn’t start out bad but, as the book progressed, her performance got worse. When she was just reading the dialogue, she was fine. It’s when she would voice the characters is when her performance would get bad. Her male characters were horrible. She doesn’t know how to voice a male character at all. And, why the hell was she speaking with a southern accent?!!! Blackwood is not in the South. At least I don’t think it is. She only voiced Addison with a Southern accent which, I though was extremely weird considering he, Andre, and Aiden were raised by the same parents in the same city and state. So, how is it Addison has a Southern accent but, the other brothers didn’t?!!! When TF did Kora become British?!!! I almost threw my iPad across the room when I heard her speaking with a British accent! And, she voice Nubia with a ridiculous thick azz Puerto Rican NY accent and mad Astrid sound like a ditzy white woman. You mean to tell me Paradise Parker couldn’t be bothered to do just a little bit of research to see how these characters were previously voiced?!!! I just don’t understand how something this significant and incorrect was not caught in post-production. Did CCJ not listen to a final cut of this book before it was released?!!! I’m thinking she didn’t because, there’s no way this book should’ve been released with those kind of mistakes. Carey Hite did a good job but, I don’t think he was a good fit for these characters. Don’t get me wrong, I’m actually a Carey Hite fan. I’ve been listening to him since EJD’s Gideon series. But, his voice is just too hood for these characters. He tends to narrate a lot of Urban novels and that doesn’t translate well with this book. I’m very glad I read this series before I listened to the audiobook because, if I hadn’t, I would’ve given the book (not the audiobook) a low rating based on the narrator’s performance. I’ve said it once, I’ve said it twice, and I’ll say it again. Narrators can make or break an audiobook. I really wish authors would do a better job at researching the narrators they choose. Don’t just go buy the stars. They need to actually read the reviews on the narrator’s performance and see what the listeners are saying. CCJ missed the mark on her narrator choice for 81st & Clark. It’s disheartening when bad narrators ruin a good book. Going forward, if Jakobi Diem or Wesleigh Siobhan are not available, just wait until they are or don’t record the book at all.

Not her best work...

The stories were not very engaging. I'm not a big fan of short stories, so that may make me biased.

Love the author but did not like this book

I usually love books from Jones but this was her worst book ever. I’ve read nearly all of her other books. Short stories just may not be her thing. I also did not love the narrators either.

Stories were too similar

The book was good, hot and steamy, but each storyline was basically the same with male/female interactions. Narrators did a good job with characters. Receiving three books for one credit is ideal.

I have read all three of these books on my kindle but it’s something about audible it just hits different. Great listen.

I really enjoyed these stories! Paradise is becoming one of my favorite narrators. Carey is good too.

I have the ebook collection and had to the get audible! Both narrators did an amazing job! Paridise was a new narrator for me but held it down! My favorite story on ebook was Controlled Chaos and Paridise did a phenomenal job! Sidenote: Cora being British was kinda funny! lol

I Love These Brothers

All three of these brother had qualities uniquely their own. Most of all I love the loving banter back and forth between each of them as well as their cousins Braxton & Lincoln. I loved how each brother expressed his love for the women each of them desired, Each story was great...I also enjoyed the small part of their mother...I really enjoy how CCJ allows some of our other favorite characters to make cameos....Two (2) of my very favorites made an appearance Kora & Nubia....What I didn't like was how the female narrator made Kora sound like she had a British accent... Instead of just allowing Kora to sound prim and proper....she made her sound as if she came from England. I think the narration was fine, though for me, CCJ's writing style will allow almost anyone to narrated her stories....She's definitely one of the BEST romance authors!