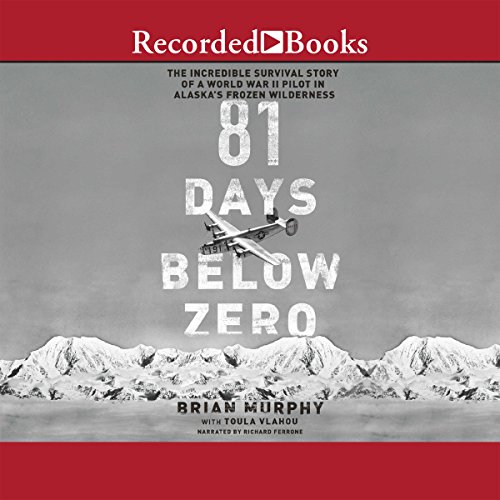 The untold story of Leon Crane, the only surviving crew member of a World War II B-24 crash on a remote mountain near the Arctic Circle, who managed to stay alive 81 days in sub-zero temperature by making peace with nature, and end his ordeal by walking along a river to safety. Part World War II story, part Alaskan adventure story, part survival story, and even part inspirational story, this is what we call "a good listen".

This is the first full-length retelling of Crane's incredible survivalist story. It has been noted in magazines and in story collections over the years. Most notably, just after the war ended, Crane's story was included in the aptly titled book, The 100 Best True Stories of World War II. Additionally, in the 1970s the story was a part of John McPhee's hot-selling collection of Alaskan survival tales, Coming into the Country.

A fantastic story so wandering and diluted that you will often forget what the book is about. It is however a fantastic tale but it reminds me of a story written by a student stretching a one page paper into five.

Talk more about his experience in the wild and less about the history of everything else.

Has 81 Days Below Zero turned you off from other books in this genre?

I am 5 hours into book and it has only talked about Leon Crain for about 10% of the time, I thought it was going to be about how he survived 81 days in the Alaskan Bush but so far I have learned about the history of everything else.

Great story but so many tangents into areas i just didn't care about. Needs an abridged version of just the main story with a few supporting facts. Audible voice over artist was OK, not great. Made everyone sounds elderly, even the young people.

OK I get it. It's obvious that the author didn't have many of the details about the actual survival story. But a shorter book would have been better than burying the real story within the mostly useless back, side,and front stories.

VERY, interesting story. Too much filler material with other seemingly unnecessary stories that make the book drag on at times.

Very long and drawn out

Awful. When the author was focused on the main story of Lt Cranes struggle it was excellent, but the author spent waaaay too much time droning on and on about unrelated or slightly related tangents that it was a chore to finish but I was very interested in Lt Crane's fight to survive.

great survival story that happened in my state

a great story that happened in my region of Alaska, I was born in fairbanks and grew up around kotzebue alaska 20 miles above the artic circle.

Apparently there isn't enough material about the crash and subsequent journey to be rescued since the author jumped around about many different topics throughout the book. I had hoped to listen to a book about a survival story but was unfortunately subjected to numerous side stories which each felt like a commercial in the middle of a good story.

This book is about everything EXCEPT a pilot surviving a crash landing and battling with the freezing Alaskan wilderness.