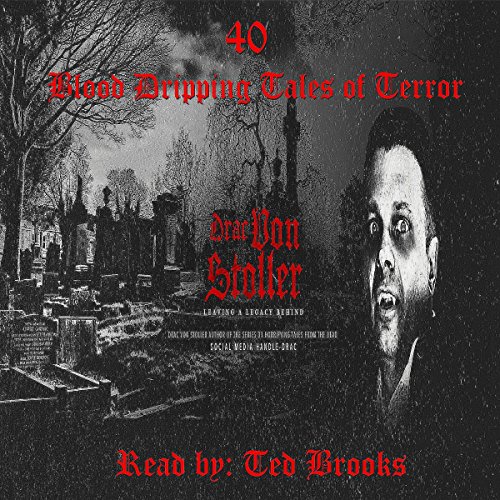 Drac Von Stoller brings together 40 blood-dripping tales of terror read by Ted Brooks to give the listener nightmares with such tales of ghosts, a vanishing hitchhiker, voodoo, urban legends, scary clowns, hangings, castles, and many more. Drac Von Stoller is already on the best sellers list on Audible. Drac Von Stoller has brought four of these audiobooks to film: Bloody Mary, The Clown Statue, The Vanishing Hitchhiker, and No More Mr. Nice Guy that are available on Amazon Video. Drac Von Stoller has also signed a world-wide distribution deal for his first feature-length film Horrifying Tales from The Dead. Drac Von Stoller's short stories have been downloaded over 1.2 million times around the globe and are destined to leave a legacy behind.

all stories are common urban legends or lame rehashed cliches fit for a 3rd grader!! why is this even a paid audiobook?? returned with utmost prejudice! does audible have no quality control protocols and checks in place to cull out junk like this so-called book?