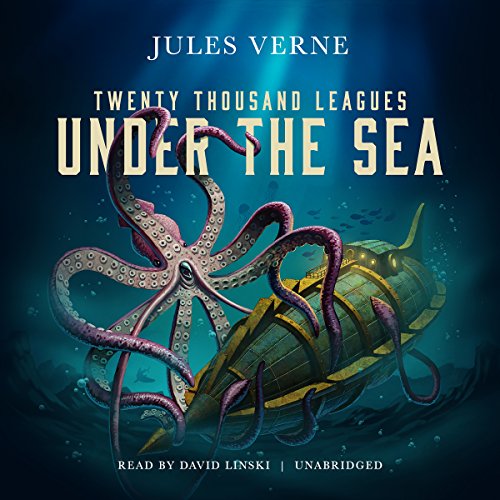 During the year 1866, ships of several nations spot a mysterious sea monster, which some suggest to be a giant narwhal. The United States government assembles an expedition in New York City to find and destroy the monster. Professor Pierre Aronnax, a French marine biologist and narrator of the story, who happens to be in New York at the time, receives a last-minute invitation to join the expedition which he accepts. Canadian whaler and master harpoonist Ned Land and Aronnax's faithful servant Conseil are also brought aboard.

A great audio book to have along in this marvellous journey of The Nautilus under the mysterious seas!!!

Lifted me up in dark moments

Verne's stories and writing style can be impenetrable to read, in their exhausting technical detail, but to listen - and to listen when they are so beautifully read - is a gateway to an enchanting journey for the mind and an inspiring vision for the soul.

A wonderful rendition of Verne

My compliments to the narrator - a superb performance. Voice characterizations are spot on, and if I’m not mistaken, I heard James Mason’s voice in Linski’s portrayal of Captain Nemo.

This guy should narrate as many books as possible! His voice is warm and soothing with perfect inflections and timing to perfectly deliver this moving story chapter after chapter.

I really felt I was right there in the eyes of Professor Aronnax. This is may be one of the best written novels I've experienced. I was blown away with the rich details of the story and under water landmarks and creatures. Often, it felt like a true story. I was always eager to get back to the book after a break. This 1870 novel was/is easily far beyond its time and will continue to hold its literary value for atleast another 150 years. There could not have been a better choice than David Linski for narration. I could feel his excitement and emotion - like as if he were really there! His story pacing and pronunciations were perfect. When he voiced other characters I easily forgot they were from the same source. (I forgive you for having a British accent vs French!) I have already added more David Linski narrated books into my library.

Such an imagination for a book written in 1870. And such a lasting character this Nemo and his vessel.

the Canadian character has a US accent, not a canadian one. The other characters have british accents.
the story is good as long as you don't mind long winded explanations of sea creatures and their habits that have been debunked by modern science.
Still, being an artifact of its time its still fun to explore the oceans with the characters, even though there are some side plots that aren't resolved all the way.

The narrator was smoothly switched from British to American/‘Canadian’ accents.
The tale seems way ahead of its time, published in 1870. It’s pretty good science fiction although there were some fantastic beasts. I just visited Jules Verne’s house in Amiens, France, so was inspired to read this classic again.

This is a WELL NARRATED, EDITED, and PRODUCED Classic.
Over 250 years of numerous republishings and retellings, as well as several film adaptations, this story has established itself as a recognized classic. This is a great Audio Book because it has the two things it needs: to be WELL NARRATED and WELL EDITED IN PRODUCTION. Far too often a narrator can do a good job relaying the story and the editing team puts/leaves in too long pauses, poor volume / tone control, etc... Congrats to all those who were involved in making this version.

I was plugged it the whole time

I was plugged in the whole time and the narrator did a fabulous job. I enjoy these adventure stories. I’ve also listened to Jules Verne around the world in 90 days which was a good read as well.

This was a good listen. David Linski does a great job in narrating this book. He was able to keep my interests even through the slower parts. This book would have been amazing back in the early 1900's. However since going underwater is not a new phenomenon this book does become slow at parts. That being said it still was a good listen. I recommend this book.