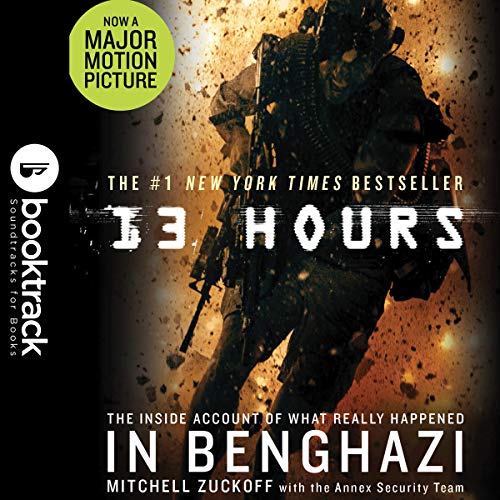 13 Hours: The Inside Account of What Really Happened In Benghazi: Booktrack Edition adds an immersive musical soundtrack to your audiobook listening experience!

The harrowing, true account from the brave men on the ground who fought back during the Battle of Benghazi.

13 Hours presents the true account of the events of September 11, 2012, when terrorists attacked the US State Department Special Mission Compound and a nearby CIA station called the Annex in Benghazi, Libya. A team of six American security operators fought to repel the attackers and protect the Americans stationed there. Those men went beyond the call of duty, performing extraordinary acts of courage and heroism, to avert tragedy on a much larger scale. This is their personal account, never before told, of what happened during the 13 hours of that now-infamous attack.

13 Hours sets the record straight on what happened during a night that has been shrouded in mystery and controversy. Written by New York Times best-selling author Mitchell Zuckoff, this riveting audiobook takes listeners into the action-packed story of heroes who laid their lives on the line for one another, for their countrymen, and for their country.

13 Hours is a stunning, eye-opening, and intense audiobook - but most importantly, it is the truth. The story of what happened to these men - and what they accomplished - is unforgettable.

Booktrack is an immersive format that pairs traditional audiobook narration to complementary music. The tempo and rhythm of the score are in perfect harmony with the action and characters throughout the audiobook. Gently playing in the background, the music never overpowers or distracts from the narration, so listeners can enjoy every minute. When you purchase this Booktrack edition, you receive the exact narration as the traditional audiobook available, with the addition of music throughout.

"A crisply written, gripping narrative of the events of the battle in Benghazi that adds considerable detail to the public record of what happened there...[an] authoritative account." (The Wall Street Journal)

A movie in a book!

You don't need a visual application on this kind of book. Soundtrack was superb! It blends well with the voice narration. Two thumbs up on this one!

The background music was very distracting. Otherwise great job. It would be nice to toggle on or off but is prefer off

It’s amazing what these men did during an unimaginable situation. This book puts you in the middle of the intense action. It does a great job of taking the politics out of something that has been completely politicized.

great book. great movie. crappy Clinton allowing this to happen! Trump 2020. Down with the deep state.

this was very compelling. voice is great. soundtrack makes it better and gives you a sense on how intense it was