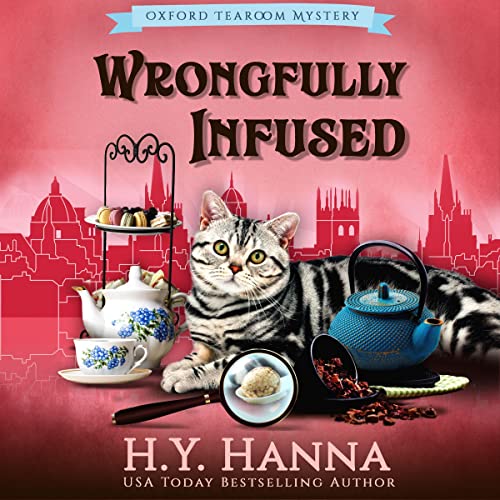 Things are eerily quiet at Gemma's quaint English tearoom, and she can't understand why - until she learns about the trendy new "tea bar" that's opened on the other side of the village. To her horror, she soon finds her customers being stolen and her business the target of sabotage. Meanwhile, her mother's newfound obsession with all things Asian means a whole new world of fluffy footwear and hazardous dinner encounters. But Gemma has bigger problems than trying to eat with chopsticks when the ruthless rival tea bar owner is savagely murdered and she is considered the key suspect!

Now she's in a real pickle, desperate to clear her name. And with her detective boyfriend accused of nepotism and under suspicion, Gemma is forced to tackle the case on her own. Luckily, she can still count on the help of the nosy Old Biddies, while the naughty antics of her tabby cat, Muesli, uncover some unexpected clues too!

As Gemma delves into a mystery where "East meets West", familiar motives arise, despite the difference between cultures. But with a full menu of suspects - from the aggrieved dentist with the strained smile, to the belligerent chef who lost everything, and not to mention a pair of estranged sisters hurt by the ultimate betrayal - she discovers that solving this case is no piece of cake....

Bonus: traditional tea egg recipe included at the end of the story!

I was really looking forward to this book but the ending really disappointed me. I won’t put a spoiler in my review for those who haven’t read it yet. The mystery portion was great.

another fun story but...

spoiler alert: Jemma is getting annoying. I dont blame Devlin. just saying. I hope her character gets less obnoxious if there is another book.

Nice to be back in Oxford!

I enjoyed this latest entry in the Oxford Tearoom series. There's trouble at the Little Stables Tearoom, and Gemma and her friends are in the thick of it. As always, there's a murder, a plethora of suspects, some great food, interesting characters, and the beautiful setting of Oxford. What's not to love?

Well, for one thing - the "Old Biddies" have gotten way too raunchy. Their inappropriate (and unnecessary) comments were definitely on the downside of this otherwise fun story. And Gemma still hasn't learned that lying, aside from the fact that it's wrong, won't improve her relationship with her boyfriend.

On the plus side, there was an interesting storyline involving Asian culture and foods. The mystery held my interest, the characters were well drawn, and as always, the book was well written. A beautifully described afternoon when Gemma takes a walk through the city of Oxford was a highlight for me, and really made me want to see it for myself.

The audio version was a pleasure to listen to. The reader, Pearl Hewitt, has a wonderful gift of being able to voice all the different characters uniquely - even Muesli the mischievous cat! She switches effortlessly between different accents, and is an outstanding narrator.

I would like to note that the Audible website states: "Recipe included" - but in fact, it is not in the audiobook which was a disappointment to me.

Overall, (with just a few negatives) "Wrongfully Infused" was fun to listen to, and good escapist fare.
I would like to thank the author for the complimentary copy of this audiobook which I received in exchange for my honest review.

Oh how I missed these books

This is the first time I've actually listened to an oxford tearoom mystery book and I have to say I wasn't disappointed. If anything I may go back and listen to them all now.

I had read the book previously but listening to it puts a whole new outlook on it. I love the way Pearl Hewitt really gets into character and you can visualize exactly what is going on. The book is well written with a thorough story line and leaves off a little unpredictably which I really appreciate.

If you're looking for a intriguing cosy mystery that makes you want to curl up with a cup of tea and a scone then this is the book for you. The book will have you wanting to listen constantly to figure out who the murder is, what trouble gemma and the old biddies are getting into next and what's going on with gemma and devlin?

*Disclaimer* I was given a free copy of this book from the author. The review above is my own opinion.

I enjoy this series and appreciate the turn this story took. I liked learning more about Taiwanese culture.

So good!
I was absorbed into the story right from page one.
After finding out about a tea bar that opened across town causing the Little Stables buisness to drop Gemma and Cassie go to scope out the competition. Little did they know the owner was a real piece of work set out to ruin the Little Stables.
I loved how fleshed out the characters are in the story. I also liked getting more of a look at what it's like for Devlin when Gemma and the old biddies get involved into cases.
In all I really enjoyed the story and didn't want to stop listening. It felt like visiting old friends.
*Disclaimer* I was given a free copy of this book from the author. The review above is my own opinion.

Gemma is such a mix of that British stiff upper lift and yet so ready to tackle any situation, and it is no different in this outing as she works to save her business and solve the murder of her new nemesis. This time, she goes it alone, at least without Devlin, but with plenty of tips from the Old Biddies. Oddly enough, her mother helps with some of her business woes, along with Cassie, of course. Great fun and challenging mystery. I only gave it 4 stars because I am not a fan of character upheaval. Let's just say I need resolution in the next book.

Love all of her books

This one was amazing. The ending has me waiting for the next book! I am so excited for it to come out!

I couldn’t wait for the release of this book and it didn’t disappoint. I love this series!