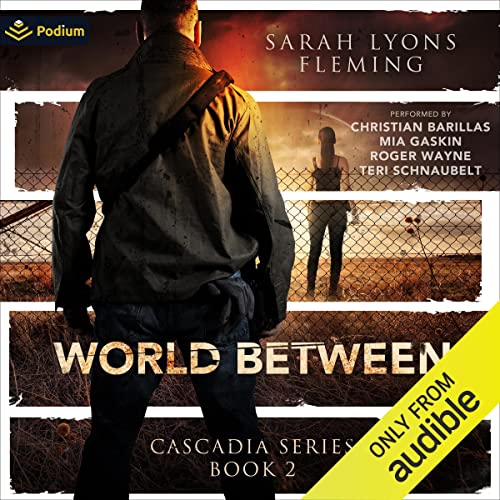 Danger can be anywhere in the world between.

Trapped in the fairgrounds by zombies and circumstance, it’s impossible to move out—and tough to move on.

Whether romantic or platonic, changing relationships prove tricky for Rose, Tom, Clara, and Craig—never mind adapting to the new not-so-normal. Being surrounded by the undead is bad enough, but with a tyrant-in-training running their Safe Zone, it’s that much worse.

Still, it’s better than being eaten alive. And when the biggest threats are removed, it seems life with zombies is on the upswing. But there’s no margin for error in the world between—and sometimes the smallest threat proves most lethal.

Is this a zombie book?

Really disappointed. I liked the first book in this series. I’ve purchased every book available by this writer. Relationships between the characters are the focus of the stories with a zombie apocalypse backdrop. But THIS BOOK felt like the entire thing was written by a romance writer aimed for teens. Are there any zombies in this book at all? Not really. I had to stop a couple of times in annoyance. The only reason I finished this book was it was extremely expensive and I didn’t want my money to be wasted. But it was. I’m really disappointed. This storyline had so much potential. I just don’t get it. I think I’m done with this writer.

Decent, but not near as good as previous series

The original series by Sarah Lyons Fleming (Until the end of the world) is one of my absolute favorites. I have listened to it several times over and I swear it just gets better with each listen. The second series, The City is also great.

This newest series does not quite live up to its predecessors though.  It is decent, however, the characters are just lacking a certain something. I would have loved to see more character development for more interesting characters like Lance and Gabe. Although Craig’s story was great in the first book, it was kind of a bore in this second one. I think the choice to have 4 narrators may have  watered the story down a bit. The storyline somewhat drags throughout and just isn't as compelling as it could be.

Although the Cascadia series is missing the same magic as the original, I still enjoyed it and will continue to listen to the complete series. I still recommend the series for anyone who loves survival/ apocalyptic  stories with well developed character arcs. Even though its not as great as the previous two, it is still worlds better than a lot other crap out there.

I loved the First book in this series but this was absolute romantic trash. I am so bummed....I held such high hopes but if she comes out with a third book, I'll be giving it a HARD PASS.

How are 20 something people going to get by the broken down cars and the Lexers?... I'm now so attached to these characters that I actually lost sleep wondering how are Rose & Tom with family & friends going to move those cars without losing someone....this book of the series was especially hard to say goodbye to so many characters....even though Ethan wasn't so bad to say goodbye to....at least as an really iratting character he did something for his family.
Wow! We readers waited what felt forever....it's going to feel like an eternity for this next book....I Hope Sarah hasn't laft us wondering....
Thank you so much for your hard work, and amazing creativity....it's so good it's believable....
STAY STRONG ROSE!!!! 😀🌹

Back and Forth, slow progression

I enjoyed Rose and Toms story along with the drama between rose and holly. Until the 3rd time they had the same argument with the same results. I wouldn’t have as much of an issue if they went different ways each time, but they pretty much repeat the same things each time. Clara on the other hand became entirely a drag to listen to. I enjoyed the slow romance between her and Jesse, but my god it’s been two books and 30+ chapters and nothing has happened. It’s the Rose and Holly problem on steroids. Every chapter she gushes over Jesse and talks about how it will never be possible for him to feel the same blah blah blah. It isn’t like Jesse’s feelings are written to be ambiguous. It’s the most obvious “these two like each other” story. So much so that I really started to dislike hearing Clara’s chapters. “I love Jesse so much oh he’s so good looking but it’ll never work so I’m going to be distant even though he’s given me multiple opportunities to say something about my feelings” pretty much sums up almost ALL of her chapters in this book. I’m cool with few outside the fairgrounds chapters if the stories between characters are written well, but it seems like the author genuinely has no idea where she wants some of the characters to go or develop. Good book, just a lot of the same stuff happening as the first book, I hope it changes with issue 3.

Fantastic second book in the series

The performances were all as fantastic as the first audiobook, and the story was absolutely wonderful. If you enjoyed the first book, then you'll love this one just as much.

The growth and changes in the characters from book I've to book two are believable, realistic, and heartrending in places. I love these stories and cannot wait for the third.

i need the next book!!! thisbone left more to be desired for sure. it wasnt as long as theb1st bit now i cant wait for the next

I just can’t pick a favorite from this author. Can’t wait for book 3!!! Hurry 😃

I can never get enough of Sarah’s books. She is an absolute genius and writes in a way that is never boring and always keeps you guessing. I devoured this book way too fast and will be reeling for more which can’t come soon enough.

The characters are well written and easy to invest in. A great take on a post apocalyptic world and humanity. I can’t wait for the next one!