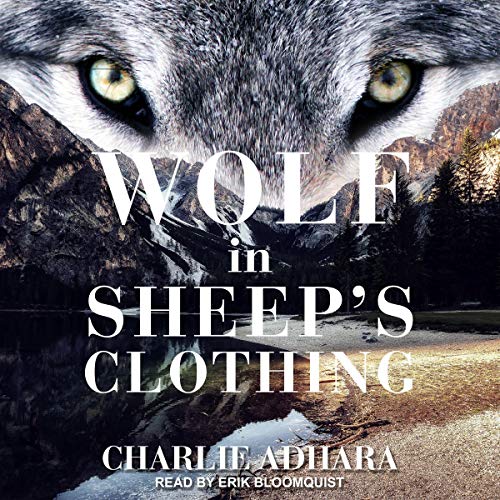 Agent Cooper Dayton is almost relieved to get a phone call from his former boss at the Bureau of Special Investigations. It means a temporary reprieve from tensions created by house hunting with Oliver Park, his partner both in work and in life. Living together in a forever home is exactly what Cooper wants. He's just not keen on working out the details.

With a former alpha werewolf missing, Cooper and Park are loaned to the BSI to conduct the search at a secluded mountain retreat. The agents will travel to the resort undercover...as a couple in need of counseling.

The resort is picturesque, the grounds are stunning and the staff members are all suspicious as hell.

With a long list of suspects and danger lurking around every cabin, Cooper should be focusing on the case. But he's always been anxious about the power dynamics in his relationship with Park, and participating in the couples' activities at the retreat brings it all to the surface. A storm is brewing, though, and Cooper and Park must rush to solve the case before the weather turns. Or before any more guests-or the agents themselves-end up dead.

This latest installment of an amazing series did not disappoint. It’s a perfect mix and balance of sexy, thrilling, mysterious, action-packed, romantic and funny!

It’s as if Cooper transformed into the sassiest werewolf mate. I found myself laughing out loud at his snarky lines. 😂 He’d managed to make Oliver and me laugh. It balanced out his insecurities.
I love seeing Cooper and Oliver finally settled in their relationship. More comfortable even if still a bit careful. Cooper’s managed to work through his emotional constipation. 👏🏼

I absolutely cannot wait for the next book of this series.

One thing that bothered me though, specially with this audiobook is how the narrator pronounced Mutya, the Filipino doctor’s name. At first, I wasnt sure what her name was because I couldn’t understand what he was saying, how could name be “mute-yah”. Then I finally realized what he was saying (I had to ask a friend with the ebook copy since I only have the audio.) He managed to butcher it. Every time he said her name, it made me cringe and I had to keep repeating the scene because it thoroughly distracted me. Mutya is a very distinct Filipino name, I wish the narrator made some effort to figure out how to pronounce the name correctly specially if it’s from a different ethnicity.

Romantic suspense at it's finest

I'm just such a big fan of this series and Wolf in Sheep's Clothing did not disappoint me in the least. In the beginning we see glimpses of Oliver and Cooper navigating living together, while house hunting. I loved how their relationship became more vulnerable & tender as they learned to trust one another.

Once they go under-cover at a couples retreat, Cooper is forced to talk about his true feelings and open up more, not only to Oliver but also to himself. And these guys are so sexy and romantic together. I love this couple and their developments as individuals and a couple.

Romantic suspense, intriguing mystery, unique paranormal universe, unpredictable twists and turns, banter and sexy times…highly recommended! I'm excited to read more! This series remains a favourite, for sure ❤ the ending is the best!

Unfortunately, the narrator is just to robotic for me. I ended up reading rather than listening.

I’m absolutely in love with this series, love the dynamic between the two main characters. Not to mention each mystery is meticulously written. there’s no preceding who the suspects are. I’ve been waiting so long for this book, and I’ll be on the edge of my seat waiting for cry wolf.

HOLY FREAKING CRAP. THIS BOOK! This series keeps getting better and better. I cannot get enough of it. This book is very sexy. Super amazing story. I need the next one asap. I loved the narration. This is just an awesome series and book.

Great character development from book to book! Wonderfully read! Very steamy intimate moments... There is no excess or forced relationship drama, just intriguing mysteries and I appreciate that.

Love this series, but the narrator needs work

I absolutely adore this series, but the narrator is....not great. He seems to be fine narrating general commentary and Cooper's voice. But when he narrates Park's dialogue (and every other character's dialogue), he does so with a strangely wooden, sarcastic cadence. It makes everything Park says sound derisive, and makes him seem cold and unfeeling, which isn't an accurate portrayal at all. I don't understand why Bloomquist narrates this way when he seems to be fine speaking in a regular voice and tone when narrating Cooper's dialogue and his internal monologue. I got past it in the previous books but it was especially bad in this one.

could not even get through the first chapter. very slllllooooowwww. not what I was hoping for

And the Hits just keep coming...

I thoroughly love reading Adhara's works. This story leads us to a retreat in which Oliver and Cooper must go under cover at a couples' retreat to work on a mystery and at the same time "pretend" for real to work on their own hidden issues. What a great premise and I never actually seen this one coming. So the ending surprised me and then to end with a surprising twist knowing that I have to wait for the next part of the series....delicious torture! Bloomquist is getting better and better...Can't wait for the next one...

I love the story, characters are amazing, plot intriguing and the voice of the narrator of the audio book is good.
What I love most is that with this series Werwolfs are more of a natural different species and not a explosion of the magical, the wolf is not a conventionalist in his/her own mind and regarded as different being. And there is no mystical moon magic to be found. While all that can be fun to read, I find it so very refreshing that it's not the case in this series.
Just two guys with a hell of a lot baggage and endearing personalitys that find love and hopefully a some point happiness.