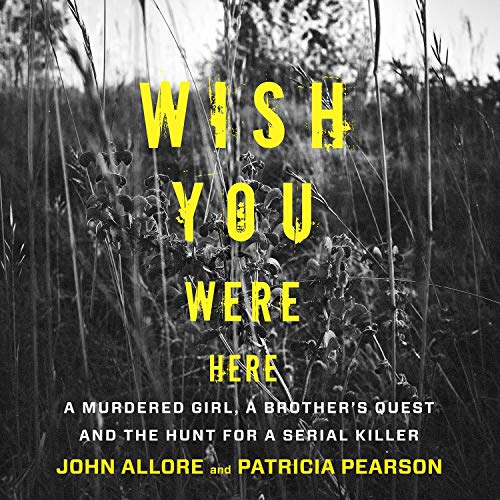 Wish You Were Here

As compelling as Michelle McNamara's I'll Be Gone in the Dark or James Ellroy's My Dark Places, this is the story of a brother's lifelong determination to find the truth about his sister's death, a police force that was ignoring the cases of missing and murdered women, and, to the surprise of everyone involved, a previously undiscovered serial killer.

In the fall of 1978, teenager Theresa Allore went missing near Sherbrooke, Quebec. She wasn't seen again until the spring thaw revealed her body in a creek only a few kilometers away. Shrugging off her death as a result of 1970s drug culture, police didn't investigate.

Patricia Pearson started dating Theresa's brother, John, during the aftermath of Theresa's death. Though the two teens would go their separate ways, the family's grief, obsession with justice, and desire for the truth never left Patricia. Little did she know, the shock waves of Theresa's death would return to her life repeatedly over the next 40 years.

In 2001, John had just moved to Chapel Hill, North Carolina, with his wife and young children, when the cops came to the door. They had determined that a young girl had been murdered and buried in the basement. John wondered: If these cops could look for this young girl, why had nobody even tried to find out what happened to Theresa? Unable to rest without closure, he reached out to Patricia, by now an accomplished crime journalist and author, and together they found answers far bigger and more alarming than they could have imagined - and a legacy of violence that refused to end.

"Wish You Were Here is an investigation intimate and mournful in nature, yet heroic in its level of forensic detail. By bearing witness to how a malefactor slips through the cracks of a haphazard, morally bankrupt system, infected by misogyny and cronyism - and how the legacy of that injustice connects to further calamity - the brave authors take back some of what is lost, bringing some measure of justice to an unending spiral of tragedy.” (Robert Kolker, author of Lost Girls and Hidden Valley Road)

“Wish You Were Here is at once a riveting mystery, an astute analysis of sexual violence, an investigation of a police force, and a study in grief and loss. On all levels it succeeds brilliantly. An engrossing, heartbreaking and necessary book.” (Don Gillmor, Governor General’s Literary Award̶ winning author of To the River)

“Wish You Were Here is a heartbreaking story of the murder of Theresa Allore and a fierce, brave investigation ... Infuriating, gripping and devastating, Wish You Were Here is also a heartfelt memorial to Theresa, and a testament to her family, who have never stopped seeking justice for her and many others who were stolen.” (Jessica McDiarmid, best-selling author of the RBC Taylor Prize finalist Highway of Tears)

This was a Great Audiobook for a first time author

This book is told from a brother of a murder victim. The author John lost his sister in Canada while she was in college The police back then tried to say his sister was an accidental death He was able to get the cause of death changed to murder on death certificate The author also helped push to start cold case team He investigated many murders from the 70's, 80's, and on. Author was able to put together unsolved murders of woman and through one to paper with maps do a geographical profiling showing there were serial murders at the time in same area. The author has a podcast too which I am a huge fan of. This book was incredible and she's light to the victims of unsolved crimes which really need to be brought back to the spotlight. Great Job I can't wait for another book from this author. Keep up great work. If you are a true crime addict this is a must for your collection to listen too.

Don’t let your friends/ relatives/ significant others narrate your books - not only were the accents SNL Level over the top - and, it would seem, insulting to Canadians (American here) but took on a snarky tone so as to completely suck all the true crime flow out of the room - perhaps they might consider a career in animation voice over (although perhaps even that is a stretch)

Wow, Binged it in 2 Days

I had to stop listening

This book doesn't know what it wants to be. A condemnation of certain law enforcement agencies? A historical perspective of crime against women that's so scattered one can't keep track of a single storyline? Fiction about bumbling characters? It is definitely not a brother's tale of seeking justice for his sister. The voices used for various characters made me feel like I was listening in on a Fred Flintstone impersonator contest. And the disjointed story made my head hurt. I stuck it out much longer than I should have - I'll never get that time back. Now I need to go find a good book to eradicate this numbing drivel from my brain.