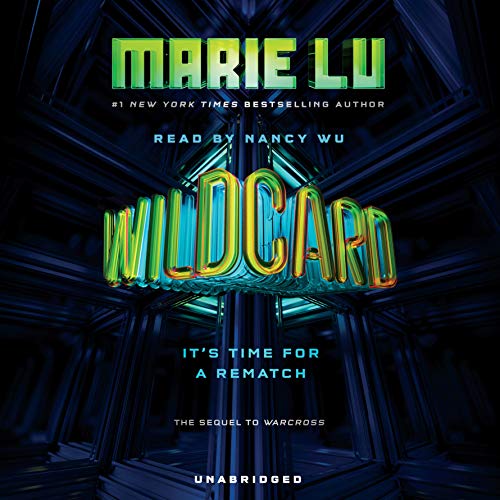 Emika Chen barely made it out of the Warcross Championships alive. Now that she knows the truth behind Hideo's new NeuroLink algorithm, she can no longer trust the one person she's always looked up to, who she once thought was on her side.

Determined to put a stop to Hideo's grim plans, Emika and the Phoenix Riders band together, only to find a new threat lurking on the neon-lit streets of Tokyo. Someone's put a bounty on Emika's head, and her sole chance for survival lies with Zero and the Blackcoats, his ruthless crew. But Emika soon learns that Zero isn't all that he seems - and his protection comes at a price.

Caught in a web of betrayal, with the future of free will at risk, just how far will Emika go to take down the man she loves?

In this explosive sequel to the New York Times best-selling Warcross, Marie Lu delivers an addictive finale that will hold you captive till the very last sentence.

"Lu’s futuristic world, with its immersive technology, feels dangerously within reach in this action-packed escapade with a thoughtful, emotion-driven core." (Publishers Weekly)

"The plotting is exquisite, with tiny details connecting back to the first book, big twists that never feel forced, and emotional power drawn from character growth. The flawlessly rendered characters anchor the sophisticated themes and world-altering stakes right up to the end game. A fast, intense, phenomenal read." (Kirkus Reviews, starred review)

"There’s plenty of high-stakes double-crossing here, and this finale moves along at a breakneck clip. Series fans will be only too happy to zoom along for the ride." (Booklist)

No Spoilers. I enjoyed the first book and as soon as I was done with it, I purchased book 2. I have to be honest, I don't know if it's because everything was NEW in the first book, but I was really interested in the story (during book 1). I found myself getting a little bored with the sequel. The story isn't bad, I just felt as if a lot of the mystery was taken care of with the first book so this one, to me, felt as if it fell a little short.

I am glad that I finished the sequel, at least I got to see how it all turned out, but I really think that maybe I needed a longer break between the 2 books. I'd recommend to anyone who just finished the first book to give themselves some time before the follow up.

this book was sort of slow and it took me a while to get through it. a bit too much introspection and a little too much predictability. the story was creative and the narrator was fine.

Cliche but not completely bad.

I refrained upon leaving a review until I finished the entire story. My first red flag in the first book was when I was about halfway through the first book when I jokingly said to my friend that it would be totally cliche if Zero turned out to be Sasuke. Imagine my disappointment when that turned out to be true.
The second major thing against this duology was where the first book ended. It ended at the climax without even an attempt at a temporary resolution. It was a blatant “buy the next installment to find out the rest of the story.” It was as if Harry Potter and the Goblet of Fire had ended with the reborn Voldemort hstanding and laughing over Harry in the graveyard.
That being said, I made another “it would be totally cliche if” prediction that Emika would have to ally with Hideo, the creator of the problem, to take it down. Well… minor spoilers, because I won’t tell you how, but… she does. This story could have been so much better if Hideo had actually been the “evil final boss” in the end. Emika’s torn feelings about taking down the man she loved would have been totally gripping conflict to follow. I realize that that is another trope as well but I honestly feel like the bait and switch like that in this story is starting to become too obvious.
All that being said, even though I saw all the “twists” coming a mile off… this was still an enjoyable duology to read, I was just disappointed in how it turned out.

The first book is great, exiting view of the world. This sequel is a great addition and complements the story. Some reviews say you have to wait before listening to the second book. But do ‘t wait, jump right in. It is a original and fantastic story.

Loved Warcross- and wildcard was a fabulous follow up! Can’t wait to see what comes next.

Wildcard was a much less cheesy and way more thought provoking than Warcross. The book still was overly fantastical and trope-y, but it was good. A fun quick read and if you like YA LitRPGs, there's no reason not to give this a shot

Keeping up the pace

After the first this was even more epic! The intricate twists and turns this take as a story are breathtaking.

I liked the narrator for these books. I also liked the story as well. I have read all of Marie Lu books and enjoyed all of them a lot.

So glad I found this series!

This story is intense, emotional, fun, & seriously thrilling. I loved book 1, but 2 is even better!! The characters are diverse & full of life. Their journey full of questionable moments & action with lots of intrigue. The world she has created is one I enjoy coming back to repeatedly. I can not wait for the next release!!! I am so glad I found this series!