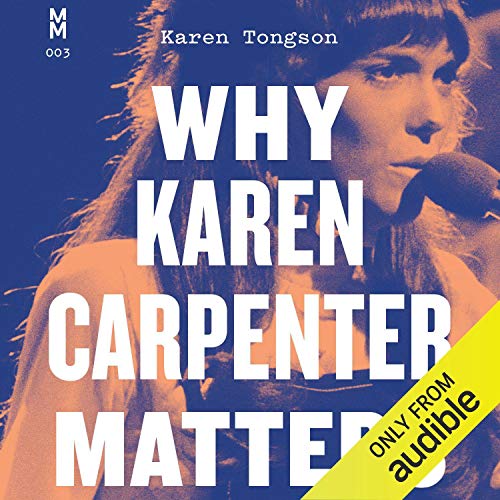 In the '60s and '70s, America's music scene was marked by raucous excess, reflected in the tragic overdoses of young superstars such as Jimi Hendrix and Janis Joplin. At the same time, the uplifting harmonies and sunny lyrics that propelled Karen Carpenter and her brother, Richard, to international fame belied a different sort of tragedy - the underconsumption that led to Karen's death at age 32 from the effects of an eating disorder.

In Why Karen Carpenter Matters, Karen Tongson (whose Filipino musician parents named her after the pop icon) interweaves the story of the singer’s rise to fame with her own trans-Pacific journey between Manila - where imitations of American pop styles flourished - and Karen Carpenter’s home ground of Southern California. Tongson reveals why the Carpenters' chart-topping, seemingly whitewashed musical fantasies of "normal love" can now have profound significance for her - as well as for other people of color, LGBT+ communities, and anyone outside the mainstream culture usually associated with Karen Carpenter’s legacy. This hybrid of memoir and biography excavates the destructive perfectionism at the root of the Carpenters’ sound while finding the beauty in the singer's flawed, all too brief life.

Great book! I enjoyed listening to the author's take on her namesake, and the process of acclimating to the USA compared to the Philippines. Very well written.