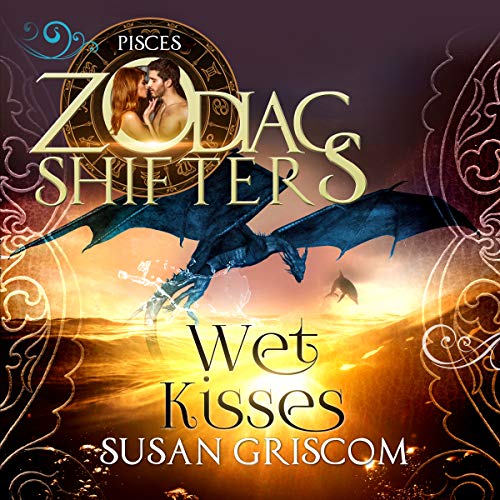 Adrian Marlowe is a dolphin-shifter who can shift into a dragon, a new and dangerous development to his shifter abilities. Now, he’s gone from wealthy CEO to man on a mission: figure out how to tame the dragon before it destroys him.

Landing the job as the new project manager in charge of the interior design of Waterscape’s new underwater hotel is Reese Briden’s dream job come true. Until she meets the sexy CEO and escaping the sexual tension that arises between them becomes impossible. Adrian could be the perfect lover. Except for one flaw. Well, maybe it’s not really a flaw, more of an inconvenience, because he is her boss.

Reese is feisty, beautiful, and confident, and she might even be Adrian’s mate, except...she doesn’t know about the dragon. Now, he has to decide whether to reveal himself or risk losing both her and his corporation. However, he just might lose himself if he lets the dragon consume him.

Stand-alone or as a series

Even though this is book #5, it can be read as a stand alone. This is just one of the reasons that I liked this book.


Until now, I've never really gotten into any kind of zodiac-based books. I'm not sure why, other than I'm not really big into astrology. I am really glad I gave this book a chance!

This book was extremely enjoyable. It had plenty of good romance and a story line that was actually interesting! The chase, the emotions, the hesitation, and the conclusion - I loved it all. There is really nothing about zodiacs or astrology in this book. I think the connection is that the shifter is a DOLPHIN shifter...ocean...fish (although dolphins are mammals)...pisces. I get it. It works for a shifter romance series. The writing was good, the characters weren't over-the-top ridiculous.

The narrator Julie Walters (aka Julie Niblett) is a fantastic reader. I have listened to at least 2 other books she has narrated and I am a huge fan. A narrator can make or break an audiobook, and Julie has never let me down. She is great with emotions, subtle character differences, scenes. I just enjoy her narration,

I was given this audiobook for free by the author, narrator, or publisher in exchange for an honest, unbiased review.

This is a paranormal romance that is well written with nicely developed characters. Adrian & Reece have insta-chemistry but the love takes time to build. There's adventure, suspense, steam, and action. The two main characters have their struggles but nothing too drawn out and it was a joy to listen to them find their HEA. The narration was excellently done. Julie Walters and Gene Branson really make a great team as narrators. They really bring the story to life and help to immerse the listener.

this was such a great book

it was so much fun to listen to. I cpukd listen to it over and over. Wish there was a number two.

...brings thrills to a heart.

PNR is not usually my genre of choice, but I decided to try something new. Griscom can be a bit overpowering at times, but she brings out the feels rather quickly. Her characters are a captivating mix of sensuality and vulnerability. Wet Kisses takes on complicated with a grace that will have your heart aching, your mind racing and your senses on full alert. Adrian and Reese are fighting a losing battle, but their emotions refuse to accept defeat. Walters and Branson take that inner turmoil and make it their mission to bring it to life. They succeed with an accuracy that brings chills up your spine and thrills to a heart.


I adore Susan Griscom's vampire books. I devour them. But she totally blew this story out of the water. It is oceans above any shifter book that I have read recently. This book has everything: location, conflict, drama, romance, HEA.

Secondly, Adrian may be rich, but he is super casual. Does he even own a suit??? He is building Waterscapes, a beautiful in the ocean hotel. He has hired an interior designer to deal with decor. He has a thorn in his side that will constantly eat at him. Drama. Drama. Drama.

Thirdly, and best of all this is a epic love story. Boy meets girl. Girl meets her new boss--surprise. He has a secret, but so does she. There a many challenges. There are doubts. HEA. HEA. HEA.

I had to read this again when it hit my Kindle last night. Even more amazing.

Update: on Dec 11 I listened to the the audiobook. It was a great way to enjoy my morning workout and while cleaning the house. Boy did time fly!!!! The narrators were so easy to listen to and believe.