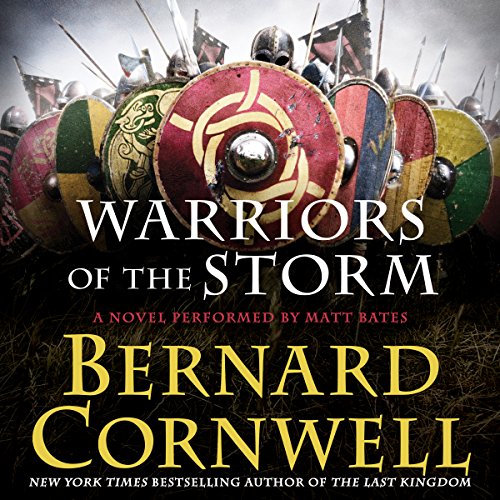 Warriors of the Storm

The ninth installment in the New York Times best-selling Saxon Tales, the epic saga of the making of England, magnificently brought to life by "the reigning king of historical fiction" (USA Today).

A fragile peace reigns in Wessex, Mercia, and East Anglia. King Alfred's son, Edward, and formidable daughter, Aethelflaed, rule the kingdoms. But all around, the restless Northmen, eyeing the rich lands and wealthy churches, are mounting raids.

Uhtred of Bebbanburg, the kingdoms' greatest warrior, controls Northern Mercia from the strongly fortified city of Chester. But forces are gathering against him. Northmen allied to the Irish, led by the fierce warrior Ragnall Ivarson, are soon joined by the Northumbrians, and their strength could prove overwhelming. Despite the gathering threat, both Edward and Aethelflaed are reluctant to move out of the safety of their fortifications. But with Uhtred's own daughter married to Ivarson's brother, who can be trusted?

In the struggle between family and loyalty, between personal ambition and political commitment, there will be no easy path. But a man with a warrior's courage may be able to find it. Such a man is Uhtred, and this may be his finest hour.

Perhaps I simply listened to the book that proceeds this one in a more distracted state; I felt after that one this story had begun to get a little tired. It was still good but it did not transport me as consistently as most of this series has. This book is masterful. The story is interesting throughout. The writing has many bright points which draw the imagination completely in and project the scenes in vivid definition. There is less of the dull repetition of descriptions we have heard in the exact words more than once in each proceeding book. People and places are often described in artful details that I found nicely done. The narrator also fully won me over. I liked his interpretation of most characters. I like the pace and emotion. I found very little about his performance which I could imagine might be improved upon. This story draws to, in my opinion, a very satisfactory closing point which both raps up the episode it tells and whets out appetite for more.

The notion that you can just hire an actor and they read a book and its wonderful does not work when the book is in a long running series and the producers don't even indulge due diligence.

If the narrator read the book and marked it up and did lots of prep, I would not be surprised, he's good but he didn't listen to the earlier readings for audio continuity, for many of us that effort is moot. If this was a stand alone book it would be ok but it isn't

When primary characters, place names etc.. in a series have new pronounciations, something stinkingly arrogant has surfaced.

Perhaps I have taken the wrong party to the pillory. This could have easily been great, instead it is jarring and annoying and has intruded on my sense of disbelief and my enjoyment of this series. An expensive disapointment.

Narrator bad at pronouncing names, kept on pronouncing Ragnar with gn sounding like gn in gnocchi

Annoying voice changes in the beginning

Another great book in the series.

The only downside to this book is Matthew Bates didn't keep the same pronunciation in some of the proper names. otherwise I loved it!

This Story is Wonderful, Captivating

What was one of the most memorable moments of Warriors of the Storm?

Jonathan Keeble is the best reader and none of the other readers have come even close to his performance.

a slow start, but once it gets going...

I did find the start to this novel a bit slow, and tought that it might be a disappointment as far as Uhtred stories go. But about 2+ hrs into the story, the story got really good.

Its the Uhtred we all love

Excellent book, but his pronunciation pains me

Sadly the thing that stuck most with me was the mispronunciations of common names. Excellent book and I like the guy’s voice, but how how they allowed him to mangle names is beyond me.

Want the Old Narrator Back

This new one is okay but he really messes your relationships built with the characters and your imagination over the past 7 books. His accent is too cockney English, which makes me picture all the Vikings like Oliver Twist villains.

Cornwall is rushing write these books to get them out and it shows.

Fun but series is def getting repetitive

I'd like to chat with Bernie over this book. Like all of his series some individual books will be better than others, but all are entertaining. This book was very predictable. It's like playing Mario brothers with the star power. You're invincible and know you're going to win.

Another excellent tale of Uhtred

A well spun tale of Uhtred and his struggles to subdue Northumbria. this is a fabulous series....