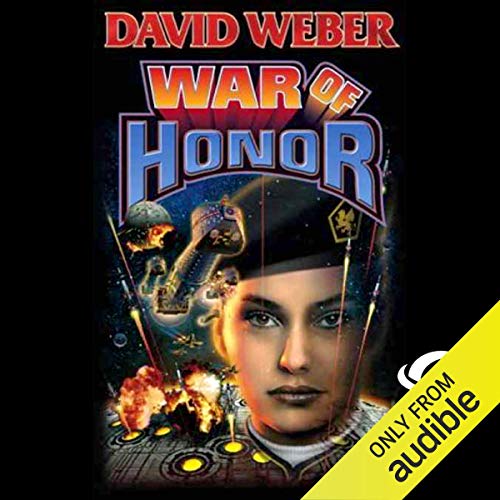 No one wanted another war.

Thomas Theisman didn't. Not after risking his life to overthrow the Committee of Public Safety's reign of terror and restore the Republic of Haven's ancient Constitution.

Baron High Ridge didn't. The Prime Minister of Manticore was perfectly happy with the war he had. No one was shooting anyone else at the moment, and his government could continue to milk all those "hostilities only" tax measures for their own partisan projects.

His Imperial Majesty Gustav didn't. Now that the fighting between the Star Kingdom and the Havenites had ended, the Andermani Emperor had his own plans for Silesia.

Protector Benjamin didn't. His people had made too deep a commitment to the Manticoran Alliance to risk seeing it all thrown away.

And Honor Harrington certainly didn't. The Salamander knew too much about how much war cost.

Unfortunately, what they wanted didn't matter....

A Note from Author David Weber
There's been some confusion—not to say, um, energetic debate, readers and fans being readers and fans—about the correct pronunciation of "Manticoran." The truth, alas, is that a stitch was dropped. An error occurred. A mistake was made… and it wasn't Audible's fault. It was mine. Before Audible recorded the very first Honor Harrington book, narrator Allyson Johnson and I not only corresponded by e-mail but actually spoke to one another by phone. She wanted to make absolutely certain she had the correct pronunciations for names, places, star nations, etc., and I tried to make certain all of her questions were answered. And so they were. Unfortunately, at some point in the process, I replied to one of her e-mails by telling her that "Man-ti-core-ahn" was pronounced "Man-tik-er-ahn." Exactly how this happened is more than I can say at this point, except to blushingly disclose that the original e-mail remains intact, confirming to all the world that it was, indeed, my fault. I can ascribe it only to a temporary mental hiccup on my part and crave your forgiveness. If, however, you must blame someone for the mix-up, that someone should be me and not Audible, who have done everything they could to get it right.

"With War of Honor coming in at over 800 pages, Weber has room to expand subplots and secondary characters and bring to the reader a feeling of depth and completeness seldom seen in science fiction novels. Favorite characters from past stories return, many of them growing in stature from unimportant secondary characters to major players in the 'Honorverse.' Weber serves up trouble in Silesia, the excitement of a new wormhole junction, scheming in Manticorian politics, strange events deep in Peep territory, and plenty of exploding spaceships - and, as publisher Jim Baen says, "We like exploding spaceships." (Amazon.com review)

Only if they were going to listen to the entire series. It's a necessary part of the overall story arc of the series, but it's really not enjoyable in and of itself.

What was most disappointing about David Weber’s story?

Imagine sitting in the corner of the room for 20 or 30 hours of political meetings. Now imagine listening to a recording of that. There's almost no content involving the characters we actually care about - instead, it's hour upon hour of politics, interstellar finance, etc. Just people we don't care about, many of whom (and there are DOZENS) we've never heard of before, sitting in meetings. Chapter upon chapter of meetings.

She's an excellent narrator, as usual.

Could you see War of Honor being made into a movie or a TV series? Who should the stars be?

The balance has shifted - and not in a good way

By this far into the series, you're either going to like David Weber's style, or your not. The Honor Harrington series tend to be on the dialogue heavy side, which I'd probably enjoy less if I were reading the books directly. However, with the audiobook narrations that I favor, Allyson Johnson's excellent reading of this series makes it far easier to accept.

Weber lured us in with the first tale of a woman starship captain on her first command in a far future time where mankind had moved out into the galaxy and settled into several star nations. Those early books centered around a major military engagement and were presented in an engaging fashion.

The later books have shifted to be more political thrillers as the protagonist has not remained stagnant, but has risen (and fallen) in power and prominence over the course of the series. It's been an interesting ride which I have, on balance, enjoyed.

Yet, I do think this book has lost that balance. It's by far the longest book up to now. While I certainly appreciate an epic yarn that's heavy enough to act as a doorstop, in this case, the story is just not substantial enough to warrant this many pages. The back and forth exchanges between the political combatants become tiresome, and the adversaries come across as comically one dimensional and mind numbingly incompetent.

In the later half the book, there is a build up to a major engagement. While Harrington's victories have always relied on a bit of well placed coincidences, the resolution this time was the hardest to buy into. Ships are on the move and actions are taking place over many months, and it all turns on the actions that happen in the last few hours. The timing is just too convenient this time.

Probably the best thing about this book is the resolution is brings to several antagonists who we hopefully won't be bothered with again. I'm going to give the next book a chance, but if this book indicates how the series is going to continue, the next book may well be my last.

Politics might be required, but maybe a bit much

Would you listen to War of Honor again? Why?

It is an integral part of the entire series, and like a stock that is simmered for hours on bones and simple veg, I am sure it will provide a rich flavour for the rest of the series...

What was one of the most memorable moments of War of Honor?

Expansion of the tree cat role in the story.

least favorite in the series so far

Probably my least favorite in the series as it was almost entirely political discussion. I think the end result of all the political maneuvering has added some interesting possibilities for the rest of the story. I just didn't enjoy the journey with this one as much as the previous books.

I enjoyed this book. I found the politics fascinating and I wonder how many wars were restarted just because someone played games with the wording during treaty negotiations. The battle scenes were great and am glad Honor was back in action, this time in charge of a fleet. The interaction with the tree cats is interesting now that they can communicate via sign language. Allyson Johnson is Honor no other narrator would do. Can not wait to start the next book in the series.

Only for the committed Honor Harrington reader

This is easily the worst of the Honor Harrington books so far. Long winded, flabby and not at all well written or edited. Inside that 36 hour book there's a good 15 hour book hiding, but it's really hard to find it. This is the first convincing argument I've ever seen for an abridged version! Clearly, Weber needs serious reining in by his editors, and he needs to slow down and take the time to write a shorter, and better, book.

The narration by Allyson Johnson is what we've come to expect. Well paced, but with positively awful and inappropriate accents. I've learned to live with it, but not to like it. And for 36 hours??? WAY too much of her and Weber. Fortunately, the next book in the timeline is one with both a different reader and with Eric Flint as co-author. Should be much tighter and more enjoyable.

This story is much more political than many of the others in the series. It also jumps around a lot between a number of different storylines. Still it's a worthy addition to the Honor series.

The Highridge government decided that war is over and they started disarming, they sopped construction of new ships, send on half pay more than 2/3 of the navy.

Newsies decided to run the story of Honor Harrington's and Hamish Alexander's affair, which irritates everyone.

The new government thinks that their partners by Star Alliance are second rate, and the treaties may be broken without any consequence.

PRH meanwhile finally established something like a democratic government without any Nepotism in the system, and the sails of PRH finally caught some wind.

Everybody agreed that better to have bad peace than Good War, unfortunately ambitions of some people do not agree to this assessment, so during the peace get ready for war.

One new conduit to manticoran wormhole is explored please try to guess where it leads?

PS
Dear HHU FANS, i WISH TO CONFIRM A FEW THINGS.
I HOPE WE AGREE THAT PREVIOUS BOOKS WERE EITHER "GOOD OR VERY GOOD", BUT FROM THIS BOOK ONWARDS IT BECOMES MASTERPIECE!!!!
OVER THE YEARS HHU HAD EVERYTHING:

BUT THIS IS THE MOMENT WHEN THEY ALL INTERTWINE AND BECOME TRUE MASTERPIECE!!!!!!!!

NEXT BOOK IS "IN FIRE FORGED

Great series, but this book dragged

Normally I love the Honorverse, but this book took 25 hours what should have been done in 5 and the action was dull and lasted only about 30 minutes. Least favorite book in the series so far. Think I'll take a break from them for a bit, but I'll come back to them!

This is the song that never ends

And it goes on and on. At its best this is a very enjoyable series for the action and world the author has created. I do not need to know the clothes, the ballroom settings, the day to day workings of the wormhole transits, etc., etc. The story could be just as entertaining in half the time. Not only have we restarted a war that took 9 books to reach peace talks, but the war has also now been restarted. If you are this far into the series, that should not be a surprise. The narration is great. The storyline is very good, but an editor would be nice. I long for a Reader's Digest condensed version.

The longest and the weakest book of the series

There's a lot of criticism about this book (e.g. check the Amazon ratings) and I've to agree that this book is flawed - but maybe for slightly different reasons. It is true that there is a lot of politics in this book and very little action - but that is not in itself an issue for me as I like good and detailed storytelling. However, no matter how good David Weber is a crafting intricate and detailed stories - some of the core plot components that he bases his elaborate storytelling on are simply unbelievable and unrealistic. Unbelievable means it's not drawing me fully into the story which means: booooring! I strongly recommend getting this as paperback so that one can speed-read to just get the overall events of the book so that one can then continue with book 11...