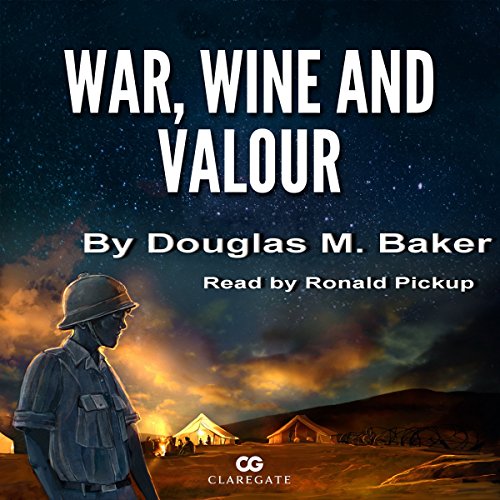 War, Wine and Valour: Commemorating 75 years since VE day and the end of WWII.

History in the making, experienced and survived by a courageous yet sensitive young school boy who risked life and limb to defend the principles of democracy.

This intrepid autobiography was written by Douglas Baker after having agreed, at the invitation of the Imperial War Museum, to give a series of personal interviews to tell his story, as at that time he was one of the remaining survivors of World War II.

Not another run-of-the-mill rendering of war stories, this is the story of a 16-year-old youth who began his journey to manhood when he volunteered to fight on the war front in the desert of northern Africa, as well as in Italy, against the inhumanity of Hitler's fascism.

This is a virtual pause resister with its vivid description of all manner of war, including friendships forged for life, the loyalty of comradeship on the front lines of the Battle of El Alamein, the biting sandstorms, the betrayal of cowardice, and the challenges and inspiration of the walking wounded.

Ronald Pickup, a renowned British actor, delivers a brilliant, action-packed reading for this abridged audiobook. He captures an authentic portrayal of the passion and playfulness of youth, the psychological challenges of men at bay, the terror of war and the unexpected humor, as artfully described by Douglas in his own words.

What other book might you compare War, Wine, and Valour to and why?

This is a remarkable and quite interesting autobiography of one brave man who volunteered as a 16 year old boy to fight in the WW2, motivated to defend the very foundations of the free world. Every war is hell, but even in the most difficult conditions there is a place for humanity and valor. I especially loved the fact that the events were not just made up and I would recommend this memoir to all ages, and not just to those who are interested in WW2 material. One more thing worth mentioning is the narration of the british actor Ronald Pickup who makes listening to this audiobook an unforgetable experience.