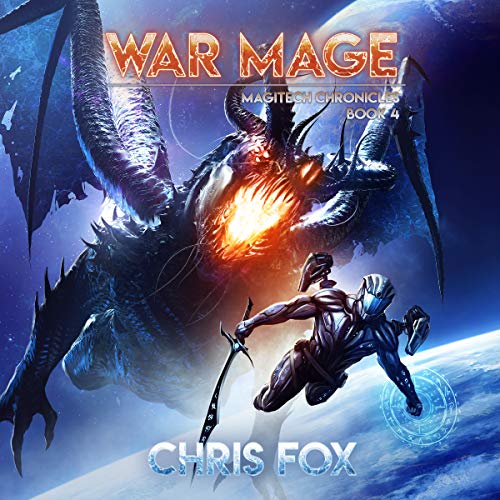 The Krox have finally reached their end game, and the sector will never be the same. Their relentless fleet darkens the skies of New Texas, home of the fabled Ternus shipyards. Their only hope lies with their sworn allies, the Shayans. But the Shayans refuse to help.

Only Aran and his company can keep their leadership alive long enough for Voria to bring reinforcements and the fabled Spellship. If they fail, the entire world burns, and Ternus morale will collapse with it.

But the war is merely a smokescreen for something much more sinister. Teodros, Guardian of Krox, plans to use the distraction to resurrect his dark father. If he is not stopped, Krox will live again.

Behind it all Talifax schemes, and Nara will pay the price.

I already read the book, but love how the Audible aspect of these books is brought to life through Ryan Kennard Burke's voice and Chris Fox's imagination!

This series keeps getting better and better!!

The setting is fascinating, with dead gods in space, magic and tech, space wyrms, etc. The characters continue to develop and the plot thickens. And the ending is awesome!!! (Won’t give any spoilers).

I do have to point out my favorite character so far... Nebiat!! She so insidious and wily. An all-time best villain.

War Mage is the start of the second phase of this series really, it sees the change in all the major Characters from what they were in the starting books, to what they will be as the series moves into its latter stages.
Magitech is a brilliant series, a combination of in-depth technology, something Chris Fox does exceptionally well, and incredible magic, creating characters that not only have spell blades, and armour that uses magic, but spell rifles, pistols, all the way up to starship cannons that can cast amazing spells to both decimate and perform powerful magic on friend and foe alike. There are very few stories on the market that have the combination of Tech, Magic, and Rich Character Driven Storylines.
At the Fourth book in, the story is only getting better, and War Mage is full of so much action, adventure, plot lines and politics, that you will go blue during some chapters it is so utterly breathtaking.
The story picks up from Spellship, with Nara still reeling from her vision of killing Voria, and worse, meeting Nefarius’ Guardian, Talifax.
The story unfolds into a river of subplots, but the main plots being that the Krox have their eyes on Ternus, meaning to take them out of the fight once and for all.
Nebiat is causing chaos amongst the allies, and she has also found a new ally in the form of Frit and her Ifrit friends.
This is a really great story though, as we get to see Aran starting to come into his own, and it is clear that Aran is going to have a major part in the future of this story.
The development of Aran’s character is done exceptionally well, not allowing him to turn into a mindless barbarian, just hacking and slashing at anything. Instead, Aran has been developed into a strategist, thinking his plans through, taking council from those around him, and coming to conclusions based on all the information he has before taking a course of action that most often leaves his enemies a smoking pile of ruin. Aran has gone from this (quite literally), mind wiped nobody, to starting to be one of the most powerful characters in the series, as with each battle, he seems to gain access to a catalyst, or some new level of experience etc that makes him that much more powerful.
As usual, I don’t want to give away any spoilers, but as Krox’s followers rally around the Ternus system to strike at the tech loving humans, Aran and his company rush to their aide. He has to hold off the forces long enough for Voria to arrive with the fabled Spellship, and hopefully save the day.
However, there are too many variables at play in this book, and those working for the forces of good, find that they are having a hard time of it.
This is a powerful story, one in which all the main characters must face their true inner demons if they are not just to win, but in this battle, it is just about survival as well. As with all of his writing, this is high action, gritty and talented storylines, that have thrilling battle scenes, that are so incredibly in-depth, it is like you are stood at the edge with a slow-motion camera so you don’t miss any of the truly amazing moves. Fox has managed to turn writing combat scenes into a fine art, and each of his battles is now a brilliant masterpiece that is just spectacular to behold.
War Mage is easily the best book in the series so far, but more than that, it is the stepping stone into the remainder of the series, in which we are going to see not just the return of further deities, but Men and Lesser Creatures elevated to the Realm of Deities, as the try to battle those that have come to lay waste to all that they have built.
And central to all of this, will be Aran, Nara, Voria, Frit, Crewes, Kazon, Nebiat, and those that are Gods, Nefarious, Krox, Talifax, Virkon, Inura, and even the legacy of Xal.
The first 3 books have been setting the stage, developing the characters, and getting us ready, War Mage finally sets the stakes as each side fights over Ternus, and from here, it only gets better, Now is the time to get on board one of the best series ever written.
As with the first 3 books, The Narrator, Ryan Kennard Burke does a brilliant job of narrating this epic series, creating the voices, both Male and Female, for all of the characters, with a very clear and easy to understand voice that is really easy to listen to. He does such great Character voices, making each of his characters sound so individual, and standing out from each other, they are easy to distinguish.
This is one of those books in which you want to listen to the book rather than read it, as the Narration is exceptional, the Narrator really brings the story to life, making you feel like you are at each of the battle scenes, and giving such emotional depth to each of the characters. It is an outstanding narration of this story, and shouldn’t be missed.

One of the best series I've listened to

Book 4 doesn't disappoint. The stakes are higher and the action non-stop. Loved it! Well worth your time.

Chris Fox is a God. Lol no seriously I love your books. Can you do the recap for every book you ever write? If not I will still listen and love every moment. Thank you. Keep up the amazing work